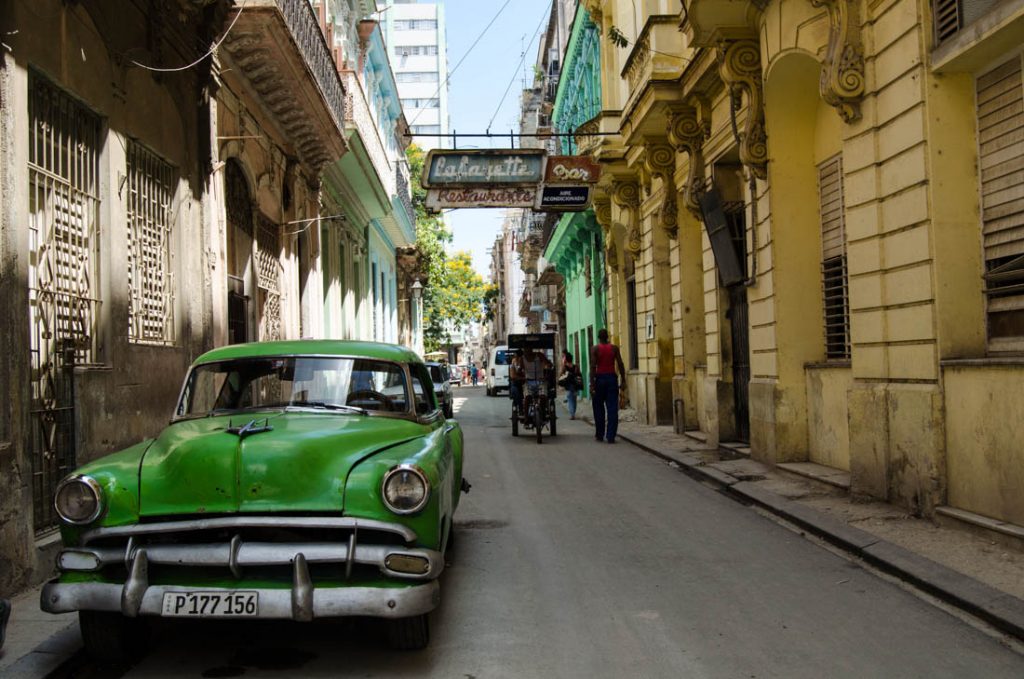 After nearly 12 months and 51 countries, we knew we’d have to end our round-the-world trip with a bang. And for that reason (as well as the geographical convenience), we chose Cuba as our final destination. Cuba is just beginning to open up to American tourists, and so we wanted to rush to Cuba before all the other Americans rushed to Cuba. Even though we flew to Havana (La Habana in Spanish) from Mexico City (which is the gateway for many illegal American tourists in prior years), we are visiting Cuba legally through the U.S.’s new self-enforced license that now allows independent travelers to visit this formerly-forbidden island nation under the umbrella of “people-to-people” learning.

We touched down in Havana and immediately saw the effects of the 50-year embargo with the United States. First, we joined a huge queue to change money at the government-run cambio in order to procure our convertible pesos. [Cuba actually has a dual-currency system where the locals primarily transact with moneda nacional or $MN while tourists pay in convertible pesos or $CUC; the rate of moneda nacional pesos to convertible pesos is 25:1]. And, although only yellow cabs are allowed to pick up from the airport, most of the cars we found in the city were either tiny Soviet-era clunkers or massive, 1950s-era U.S.-made dinosaurs. Some of the old cars that charge tourists by the hour for a ride were nicely renovated, but most were barely limping along and required constant maintenance.

This theme of making do with what they have was pervasive throughout our Cuba trip. At the airport in Mexico City, we saw Cubans trying to check things like car tires back home. In the city, scaffolding for building restoration was constructed using a maze of wooden beams due to the lack of spare metal. And many houses use only wooden panes to keep out the elements since glass is expensive and difficult to procure. Yet despite the lack of many material goods, we were surprised by the cultural wealth we found in Havana. Innovative art galleries dotted the city and Cuban bands and rumba dancers performed in its bars and restaurants. In the evening, every door in town was flung open, and young and old alike sat in chairs outside while music blared from their speakers.

We chose to stay exclusively at casa particulars—private rooms in people’s homes—to have the most authentic Cuban experience. The main areas of downtown Havana are divided into Habana Vieja, Centro Habana, and Vedado. The most interesting sights and quaintest atmosphere are definitely in Habana Vieja, which is where we chose to stay. Habana Vieja is jammed with crumbling architectural masterpieces that symbolize the country’s varied history [Havana was colonized by the Spanish for a long time, the British for a short time, and influenced by a strong American presence for the first half of the 20th century.]

Centro Habana lies to the east of Habana Vieja and is the city’s most densely populated area. As such, it gives a great glimpse into real-life Havana, outside of the more touristy historic area. It is also home to the Capitolio Nacional (constructed during the post-WWII sugar boom and reminiscent of the U.S. Capitol… although it now serves as an educational building) and the Museo de la Revolución (the former Presidential Palace that now houses a museum about Castro’s revolution… including a display out back of the 18m yacht that carried him and his comrades from Mexico back to Cuba to launch their attack in 1956). Although the stretcher that carried Che Guevara’s body in the museum is a headliner, our favorite part of Centro Habana was the Malecón. Often described as the “world’s largest living room sofa,” the Malecón an 8km sea drive where people from all over Havana come to walk, lounge, sing, dance, drink, canoodle, and more. It is especially beautiful around sunset.

We walked nearly the full length of the Malecón on another day in order to see Vedado, the former epicenter of the gangster and gambling scene of the 1940s and 50s. Here, we saw the Hotel Nacional, which was built in 1930 as a copy of the Breakers Hotel in Florida and played host to the largest-ever gathering of North American mobsters in 1946. Nearby, we visited the site of the former Havana Hilton, which was confiscated just nine months after it opened by Fidel Castro who—renaming it the Hotel Habana Libre—ruled the country after the revolution from one of its luxury suites. At one time, two of its floors housed the embassy for the Soviet Union, and now it is home to an array of shops and offices. It still displays pictures of Fidel’s bearded fighters from when they rolled into town over 50 years ago, but, encouragingly, the American flag now flies out front.

In addition to the presence of the American flag, there are other signs that change is soon coming to Cuba. Since 2011, laws concerning privatization have been relaxed, and the culinary revolution is now in full swing in Havana. From lobster feasts to the traditional Cuban sandwich, we had some amazing meals in Havana. And, of course, we followed in Ernest Hemingway’s footsteps to appreciate the islands world-class rum and mojitos.

Our three nights here were a whirlwind, and we soaked up Havana’s one-of-a-kind atmosphere before it is diluted with Starwoods and Señor Frogs. As some of the early American tourists, we tried to go out of our way to be good ambassadors for our country. We offered our answer to, “¿De qué país son?” (“Which country are you from?”) with a big smile, and enjoyed chatting with the locals who were excited about America’s increasing engagement in Cuba. Determined to make a good impression, we let our guard down a bit more than we normally would. When a ragtag group of men with homemade musical instruments approached us as we were walking on the Malecón and tried to serenade us with “Stand by Me,” we happily gave them 5 CUCs despite their unsolicited advance (though the leader of the pack kept shrieking “10! 10!”).

But sadly, our low guard also resulted in us almost being the victim of our first tourist scam of our entire year of traveling. In short, this is how it goes: friendly man approaches on the street, invites you to hear his band play that evening, asks you to come to the bar next door to get a flyer, then has you sit down while he gets the flyer and orders you a drink, when the bill comes its 4x the usual rate. Thankfully, we recognized the game early on and hightailed it out of there without parting with any of our money. But it was a good lesson in never letting politeness get in the way of a situation that makes you uncomfortable.

With our guard sufficiently back up, but still happy hearts, we looked forward to saying goodbye to crazy Havana and hello to the tranquil countryside. Our knowledge of Cuba’s rum thoroughly mastered, and it was now time to move onto its cigars.