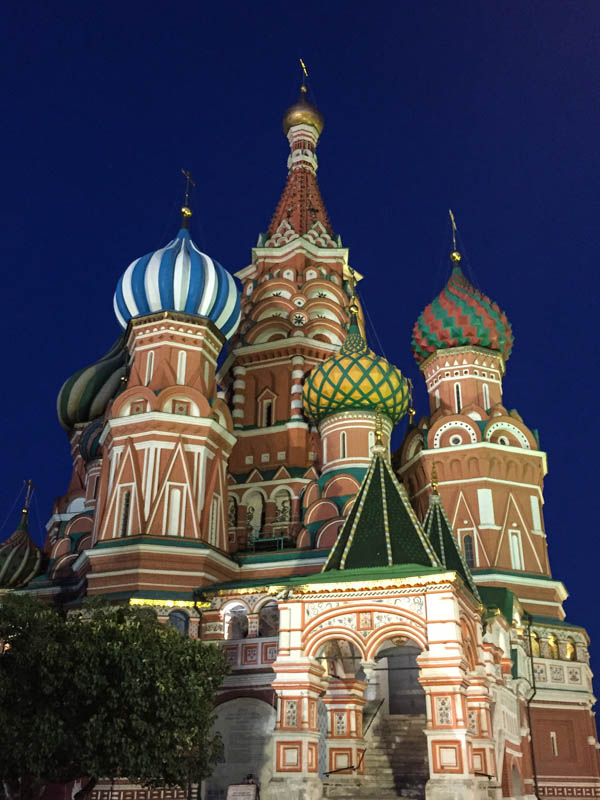 Most American travelers–especially of the backpacker variety–do not go to Russia. It’s hard to get into. It can be expensive. U.S./Russian relations are on the rocks. Few people speak English. And so on. Needless to say I was skeptical when Chris insisted that Russia be our first destination as we transitioned from Southeast Asia to Europe.

Man, did Moscow prove me wrong. So wrong that I need to divide the telling of our time there into more than one post.

But before I get to convincing you why I was wrong, let’s start with the basics.  First off, there is a debate over the correct way to pronounce the name of the Russian capital. Some say it’s actually proper to say Mos-co (as in Costco). As my very learned grandmother told me before I departed, “they say there is no cow in Moscow.” At the end of the day, though, neither match how Russians actually call it–Moskva (mahs-KVAH)–so it’s probably one of those tomato, tomahto situations. Also, the city’s inhabitants? They’re called Muscovites. And the center of Moscow? Why, Red Square, of course. The symbolic and literal heart of Moscow, Red Square was the first place we went after checking into our hotel.

Red Square and the Kremlin

The first building you encounter as you walk towards Red Square from the Moskva River is also its most famous. Cathedral of the Intercession of the Most Holy Theotokos on the Moat, or (thankfully) more commonly called St. Basil’s Cathedral, was built in the mid-16th century on orders from Ivan the Terrible to commemorate important military victories and was unlike anything ever built before. According to legend, Ivan ordered the eyes of its architect to be put out after its creation to prevent him from building another like it again.

The Soviet Union confiscated the cathedral from the Russian Orthodox community upon taking power as part of its program of state atheism, and it remains a museum instead of a church to this day. 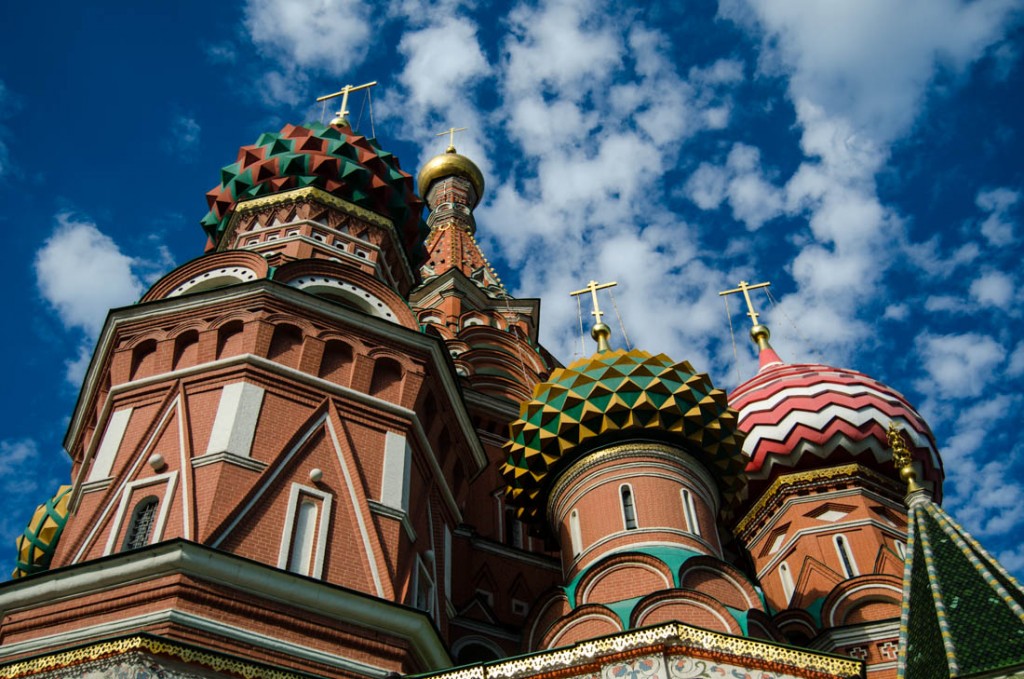 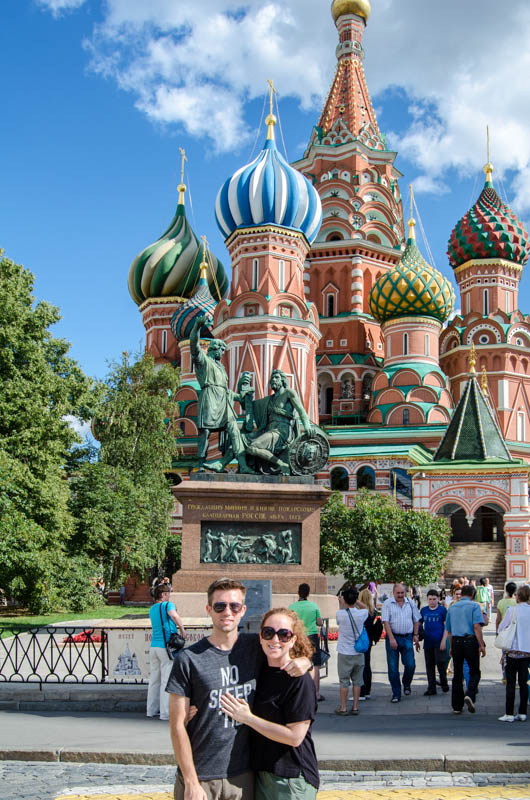 After St. Basil’s, you enter into Red Square itself. Red Square is the central point in Moscow and all of the city’s main streets originate from here. I don’t think I ever knew why it was called Red Square before visiting, but I thought it had something to do with the red buildings, communism, or even the blood that has been spilt in the square throughout history. Wrong. It actually is derived from the Russian word “krasnaya,” which originally meant beautiful but came to mean red in modern times.

In the center of the square in front of the walls of the Kremlin in Lenin’s Mausoleum. It is the current resting place of communist revolutionary Vladimir Lenin. His embalmed body has been on display here since shortly after his death in 1924 . Literally, on display. You can see him in a glass case. Or at least that’s what I’m told. We didn’t get the chance since the tight viewing hours didn’t work with our short stay in Moscow. Perhaps we may never get the chance since there has been a steady rallying cry from the Russian people to have Lenin finally buried in his hometown of St. Petersburg next to his mother (which was actually what he wanted all along).

The fortified and imposing walls of the Kremlin border Red Square to the west. Throughout centuries, the Kremlin has served as the center of Russian government: from the seat of grand dukes, the residence of tsars, the center of the Soviet government, to the official residence of the President of the Russian Federation it is today. We lined up to buy tickets, passed through some tight security, and ventured into its walls to see the big, bad Kremlin firsthand.

After passing through some imposing (and off-limits) state buildings, we found ourselves at Cathedral Square, which is in the heart of the Kremlin. It is surrounded by gorgeous, gilded buildings and cathedrals where tsars and monarchs were crowned throughout history and also interred upon their deaths.

Next to Cathedral Square lies two other curiosities: the Tsar Bell and the Tsar Cannon. The Tsar Bell is the largest bell in the world (at 216 tons), though it was broken during casting and has never been rung. The bell has quite the interesting history. While it was cooling from its second casting in 1737, a fire broke out in the Kremlin and guards threw cold water on its wooden support structure, which caused it to crack and a huge slab to break off. The fire burned through the supports and the bell fell back into the casting pit, where it stayed for almost a century (and even thwarted Napoleon’s attempts to bring it back as a trophy to France from his conquest of Moscow in 1812) until it was finally raised by a (ironically) French architect in 1836.

The Tsar Cannon has a somewhat less sensational of a history, albeit it a long one since it was cast in the 16th century. It is the longest bombard cannon in the world, but it has never been used in war.

We left the Kremlin after seeing some beautiful churches, the world’s largest bell and cannon, and some stately buildings, but, alas, no President Putin. But we weren’t done with Red Square yet. The last major building located within the square is the GUM (pronounced: goom) shopping mall. 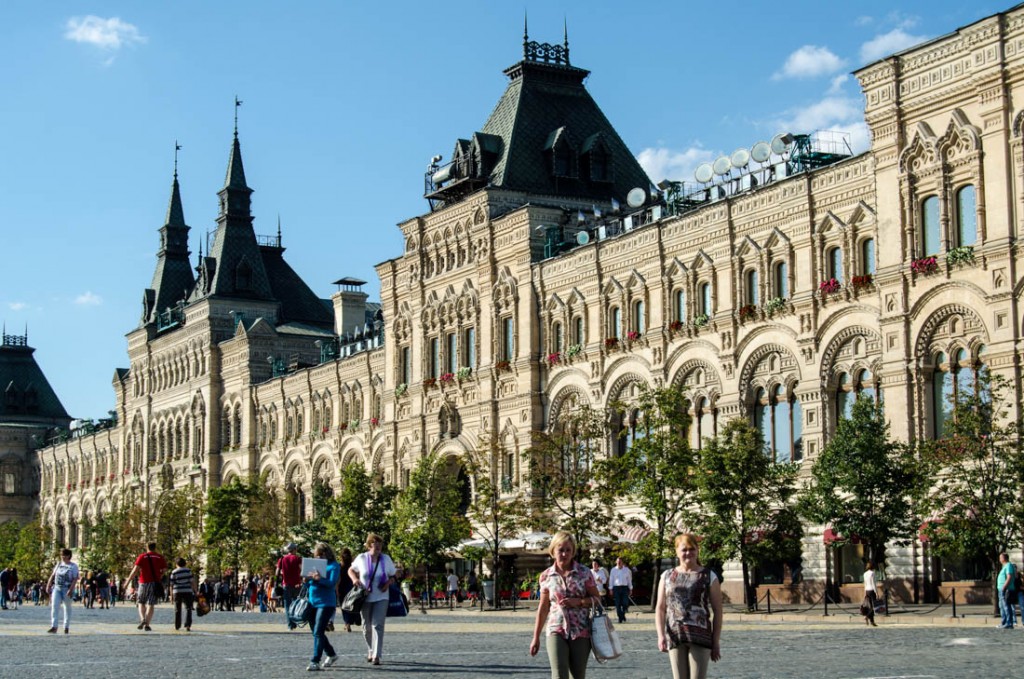 It’s full name is Glavnyi Universalnyi Magazin (literally “main universal store”), the same name as the main department store in many cities of the former Soviet Union. It was used as office space by Stalin for awhile, but now happily is a bastion of consumerism, housing luxury brands likes Hermès and Tiffany & Co. Ironically, GUM faces Lenin’s Mausoleum… an interesting juxtaposition of Russia’s past and present.

More on Moscow to come…