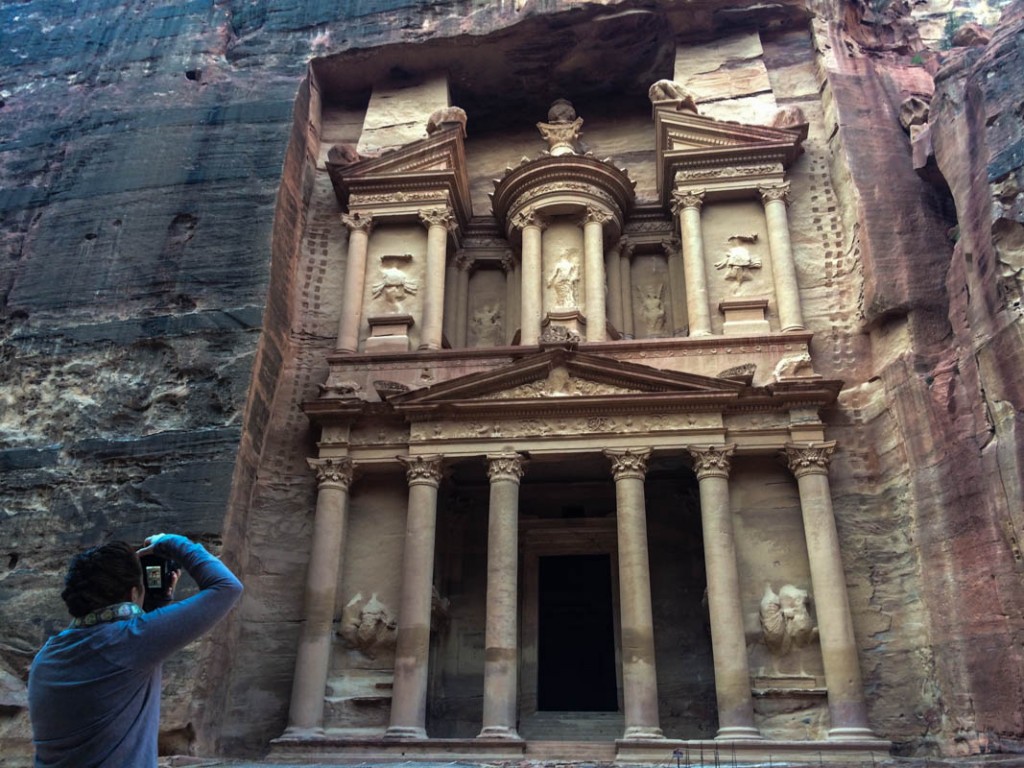 Visiting Petra—one of the Seven New Wonders of the World—was one of the top five things Chris and I were looking forward to most on our RTW trip. This ancient city was built by the Nabataean people more than 2000 years ago as their capital and spiritual center during the height of their trading prosperity and prominence. After trade routes shifted to bypass Petra, the Romans overthrew the weakened Nabataean Empire and requisitioned Petra for their own use. After two earthquakes ruined much of the city, Petra lay forgotten for centuries by all but the local Bedouin tribes that tried to hide its existence from the outside world. That all ended in 1812 when a Swiss explorer named Jean Louis Burckhardt disguised himself as a Muslim holy man to gain entrance into the lost city. Steven Spielberg added to Petra’s hype by giving it a starring role in the finale of Indiana Jones and the Last Crusade (that also meant, of course, that Chris insisted we re-watch the movie before we went and continuously quoted lines from it during our visit).

Petra was able to remain hidden for so long until Burckhart and Speilberg made it world famous due to its inaccessible location. The only way into the city is through the Siq (sounds like “seek”), a narrow, 1.2km canyon that is one of Petra’s highlights in itself. Just when you think the walls of the Siq couldn’t narrow anymore, they abruptly open to reveal perhaps the most spectacular sight in Petra: the Treasury. Carved directly into the rose-colored sandstone, it was originally built as a tomb but later earned its name from the popular belief that an Egyptian pharaoh hid his treasure here (the bullet holes in its facade—made in the attempt to dislodge the hidden treasure—are proof of how seriously locals took this myth).

Chris and I decided to get up at the crack of dawn to try to beat the crowds. We arrived shortly after opening around 6am and were shocked to find the place completely to ourselves. We took our time walking through and admiring the Siq, and, when the Treasury revealed itself to us, we were alone before the mighty structure. It made for a mysterious, eerie, and amazingly special experience.

We were eager to preserve our private visit, so we moved on past the Street of Facades (a wider passage that with dozens of tombs built into its walls), the Theater (an ancient theater chiseled out of the rock), the Royal Tombs (a series of huge and beautiful burial places), and the Colonnaded Street (a memento from Petra’s Roman era) to the Monastery, which is hidden high up in the hills. [Of course, I’m glossing over a one-hour accidental detour we took on the path—which we mistook for the path to the monastery—to the Al Habis mountain. The upshot was a friendly Petra-inhabiting dog became our self-appointed leader, and we were able to see some truly beautiful views that most Petra visitors miss out on].

We finally found the right path to the Monastery and made our way up the over 800 steps, and, after it came into view, we realized the trek up was so worth it. The Monastery looks like a bigger, but less ornate, version of the Treasury. It was also originally built as a tomb, though it gets its name from crosses carved into the inside walls, indicating it was used as a church for a period of time. We decided to hike up even further to the viewpoint to see the Monastery and the surrounding hills; this was the most stunning view of the day, and it helped the Monastery edge out the Treasury as my favorite sight in Petra.

We ended the day with another longer hike up the central mountain to the High Place of Sacrifice, so named for its role as the ancient location for animal sacrifices. You can still see drains on the ground to channel the animals’ blood (eww), but the real highlight of the trek up is the view.

After two long hikes (usually guidebooks recommend you visit either the Monastery OR the Place of High Sacrifice on a one-day visit, but we were able to make it to both), we were ready to head back to our hotel in the early afternoon. As we made our way back to the Treasury and the Siq, we couldn’t believe how the view had changed from when we saw it in the early morning. Crowds of people were lined up in front of the Treasury snapping photos, locals with camels were peddling rides, and the Siq had a backlog of people waiting for their turn to enter the ancient city. As we walked back through the Siq, we passed masses of tour groups and had to periodically hug the walls as a horse-drawn cart barreled through the canyon.

The commotion at midday made us so thankful for our time by ourselves in Petra at dawn. Visiting this “rose-red city half as old as time” is definitely something I’m going to remember the rest of my life.