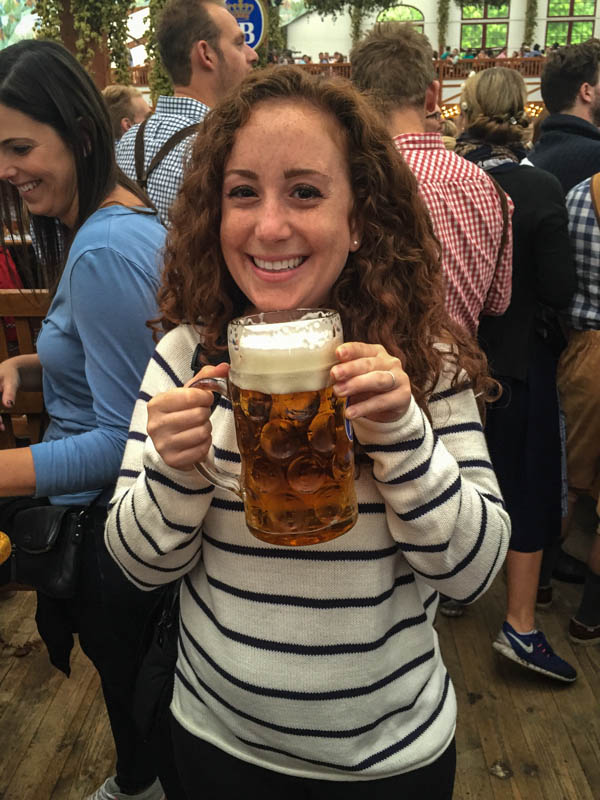 This post, like our actual visit to the city, will be light on Munich and heavy on beer. Why? Our Munich schedule was brutal; we arrived late Friday evening, planned to get in line around 6am on Saturday for a good spot at Oktoberfest, and then had to catch a train to Vienna Sunday morning. After a brief pipe dream of sightseeing Saturday afternoon, I realized that the weekend would be about experiencing Oktoberfest in all of its rowdy, foamy glory. We’ll be back to see Munich sometime in the future (when hopefully the hotel rooms no longer start at $400 a night).

After throwing our bags down in said exorbitant hotel room, we decided to head to the city center for a quick glimpse of Marienplatz at night and visit the legendary Hofbräuhaus for dinner and our first liters of beer. [Yep, liters of beer. If you try to order anything less, the waitresses tell you to go home and come back when you’re thirsty.] Founded in the 16th century by the Duke of Bavaria, Hofbräuhaus is one of the oldest beer halls in Munich and absolutely steeped in history. We would get to know this brewery quite well during the course of our weekend in Munich.

With the ground floor beer hall filled to the brim with Oktoberfest pre and post-gamers, we found a spot in the massive festival hall on the second floor. We ordered some beer and food and joined in the revelry. While we waited for our beer, I read from my guidebook about Hofbräuhaus’s history. In addition to being the royal brewery for the Kingdom of Bavaria, which was internationally known for its beer quality thanks to strict beer purity laws, Hofbräuhaus has had a string of both renowned and nefarious guests alike in its halls throughout the centuries; Mozart, Lenin, and even Hitler were regulars here. Nowadays, packs of tourists rub elbows with locals (many of whom have standing reservations at “stammtisch” tables) within its halls.

With our first liters of beer down the hatch around 10pm, we thought it best to head back to the hotel as the men were planning to depart at 6am the next morning to try to secure us good spots. The festival didn’t officially open until 9am, but people line up hours before to find a prime seat in one of the best tents. The only way to get a seat is to make reservations many months in advance, shell out a lot of cash for an organized tour ticket, or get there super early and sprint when they open the doors. Thankfully, the chivalrous men were up for the challenge, and the ladies got an extra hour of sleep before joining the line around 8am. There are fourteen large tents, and the boys had set their sights on the most famous: Hofbräu Festzelt (the same brewery we had frequented the night before). The tent holds 6,896 inside, and we were able to score six of those spots for our group. So far, so good.

But a quick historical interlude before we go inside the tent. This annual tradition got its start back in 1810 with the wedding of Crown Prince Ludwig and Princess Therese. The citizens were invited to attend the celebrations, and they were such a hit that festivities were repeated again the next year. Originally, the focus of the festivities was on horse racing and agriculture, a far cry from the beer chugging merriment seen today. Most of the partiers inside the tent wouldn’t know it, but there is also a massive carnival that also goes on around the grounds, and many families bring their kids to enjoy the games and rides. Oktoberfest is the largest annual festival in the world and celebrated its 200th anniversary in 2010 (only wars and cholera outbreaks have interrupted it). And now for what you’re all wondering: Why is it called Oktoberfest if it’s in September? The royal wedding was held on October 12, but it was eventually moved up to end on the first Sunday of October to take advantage of warmer weather.

Once the beer started flowing, we quickly got a crash course in what goes on inside the tents. Wonderfully, the majority of attendees wore traditional German attire to Oktoberfest… dirndls for women and lederhosen for men. And not the cheap Halloween costume versions either… many paid around 200 euros a pop for their ensembles. I was disappointed not to have been able to join in the dress up fun, but that outlay for a one-time wear just isn’t in the cards for our RTW budget. Weirdly, other people wore random costumes. I kept running into a bunch of Italians inexplicably dressed up as nuns.

Almost instantly after the beer sales started, these lederhosen-clad men began jumping on the tables and then chugging beers while the crowd either cheered their approval at a job well done or booed a poor showing. A guy at the table next to us was one of the first to go and provided a step-by-step example of the process:

Pretty nuts, right? And this happened about every minute or two during the first hour of the tent’s opening before the band started. Usually the crowd was supportive, especially when a woman tried it. Other times, when someone took too long or started spilling the beer, the crowd turned on them… even throwing pieces of food or, once, an entire giant pretzel! But the most bizarre was the guy who took off his shoe, poured his beer into it, and then drank from it:

Others wanted to try their hand at crowd surfing:

Even though none of us stood on a table… and definitely none of us drank from a shoe… we had an awesome time inside the tent. The atmosphere is absolutely electric and you can’t help but “Prost!” your neighbors and sing along with the band when they played Ein Prosit every 15 minutes on the dot or a crowd favorite like Hey Baby, If You’ll be My Girl and Country Roads.

The only downside was the terrible bathroom situation for the ladies. You had to anticipate at least 30 minutes in advance that you had to go, and, after fighting across the entire tent to the WC area, you’d join a mass of women pushing their way through the single entry door. More than once the huge line turned into an anxiety-inducing mosh pit, and it wasn’t uncommon to see some girls crying next to others snapping photos with selfie sticks and more than a few bringing their liter of beer along for the wait. The bathroom situation provided a powerful incentive for me to curb my beer intake.

We ended up spending about six hours in the tent and averaged 2-3 liters and 1 giant pretzel each. We emerged from the tent around 3pm and did a quick spin through the fair grounds, including picking up an obligatory gingerbread heart.

By the time we made it out of the maze of the festival, it was after 5pm when we made it back to the hotel (like I said, it was pipe dream to think I’d be able to see the city during this weekend). Everyone crashed pretty hard, but, amazingly, all roused in time for a final group dinner in Munich.

We embraced Munich during Oktoberfest in all of its rowdy glory… and we’re still recovering from it days later. Although this was my first and likely last Oktoberfest, I’m glad to have crossed that off my bucket list.