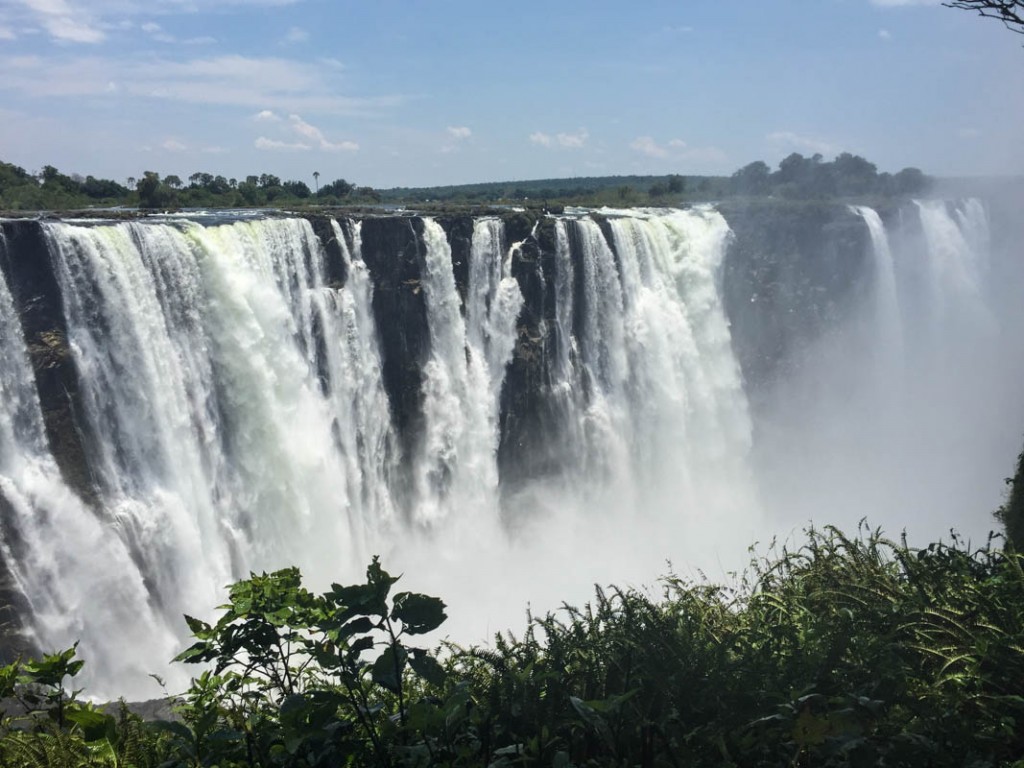 Only about one month after Chris and I started dating, he asked me to go to South America with him. I guess that was a good sign that 1.) we really liked each other and 2.) we were kindred travel-loving spirits. We visited the remarkable Iguazu Falls on that trip, and we both count the day we “snuck” into Brazil from Argentina to see the falls up close as one of our favorite days of our lives. Like Iguazu, Victoria Falls is also on the border of two countries (Zambia and Zimbabwe), and we knew we’d once again want to see the view from both sides.

Visitors to Victoria Falls can choose to stay on either the Zimbabwe side in the touristy little town of Victoria Falls (the city) or the Zambia side in the more real city of Livingstone. We picked Livingstone due to a combination of flight availability, hotel points options, and our desire to experience a more authentic African city. And once we found the outdoor courtyard of the Zambezi Café—filled with locals drinking beer and watching soccer and an array of crocodile dishes on the menu—we knew we made the right choice.

Although Chris loved his crocodile spare ribs, of course the real draw of our visit here was Victoria Falls itself. Victoria Falls isn’t the highest or the widest waterfall in the world, but it is classified as the largest because its width and height result in the largest sheet of falling water. It’s about twice as high as Niagara Falls and rivaled only by Iguazu. The falls also looks very different depending on what time you visit. The rainy season for the Zambezi River, which feeds the falls, happens from late November to early April, and, paradoxically, this period is when the falls are usually at their weakest. The river volume grows during this time until the spray from the falling water reaches such force that its mist shoots up high in the air and is visible from miles away, giving rise to the other name for the falls Mosi-oa-Tunya or “the smoke that thunders.” During this time the falls are shrouded in mist and nearly impossible to view from the ground.

We started on the Zam side, and our taxi driver Simon (who loved to show us pictures of when he was a driver in the caravan for Bill Clinton and George Bush during their visits) appointed himself our tour guide for the morning. The sights on this side were relatively underwhelming since we were visiting during the low season for the Zambezi River. We could actually see the rock face of the cliffs and even the bottom of the gorge, which would be completely covered in water in a few months.

In addition to actually being able to see the falls without the heavy mist, Victoria Falls during the low season is also a prime destination for adrenaline seekers who want to take a dip in the “Devil’s Pool.” This pool right at the edge of the waterfall is “safe” to swim in during the low season thanks to a naturally occurring lip (think of it as nature’s infinity pool). I told Chris I wanted to do this in a moment of insanity, but then subsequently chickened out later. Now, as I’m researching this on Wikipedia and reading, “occasional deaths have been reported when people have slipped over the rock barrier,” I’m glad that I’m a scaredy-cat. That said, hundreds of people do it every season and have a fantastic time, and we did catch a glimpse of a few adventurous folks taking a dip in the Devil’s Pool from across the gorge.

We next ventured over to the Zim side, which boasts the best views of the falls. Our trusty driver Simon dropped us off at the Zam border and we walked across the picturesque Victoria Falls Bridge—a popular bungee spot—to experience our first border crossing on foot.

Even though we were visiting during the low season, the Zim side still had spectacular views. As we got nearer to the falls themselves, we started to feel the mist—like an inverted rain—grow heavier. We were drenched by the time we reached the end of the trail, but it was a welcome relief on a sweltering day.

This is probably a good time for a quick word on the town we are staying in’s namesake, David Livingstone. Livingstone was a Scottish missionary and explorer who was believed to be the first European to view the falls in 1855. He viewed it from a landmass—now known as Livingstone Island—in the middle of the river on the Zam side. He named his discovery Victoria Falls in honor of Queen Victoria (though its indigenous name “the smoke that thunders” continues today as well). Livingstone returned to England after viewing the falls and wrote about the beauty he saw, earning himself international fame. He returned to Africa a second time, but the expedition was unsuccessful and the members of his party abandoned him one by one. Livingstone’s whereabouts were a mystery for some time until the New York Herald sent a reporter out looking for him who succeeded in finding him (uttering the famous line, “Dr. Livingstone, I presume?”). Livingstone would ultimately die of malaria and dysentery in Africa, but he is one of the few colonial Europeans still respected by modern-day Africans thanks to his life’s mission to end the slave trade.

After the falls, we decided to check out the city on the Zim side, which is also named Victoria Falls. We explored the town a bit and then found ourselves a table at the famous Victoria Falls Hotel, which opened in 1904 and still has a very colonial aura. We had high tea on the patio overlooking the bridge and were surprised to find warthogs roaming free on its grounds. [This wouldn’t be our only encounter with wild animals on this trip; on the walk back to Zambia, the locals advised us to arm ourselves with rocks to guard against some very aggressive baboons].

After a hot day hiking and our first on-foot border crossing, we needed something a little stronger than tea to celebrate. Zimbabwe’s Zambezi beer (made with maize) was significantly better than the Iguana brand beer we capped off day with at Iguazu with. And so we toasted to seeing the world’s two greatest waterfalls together and two of Africa’s most beautiful countries in one day.