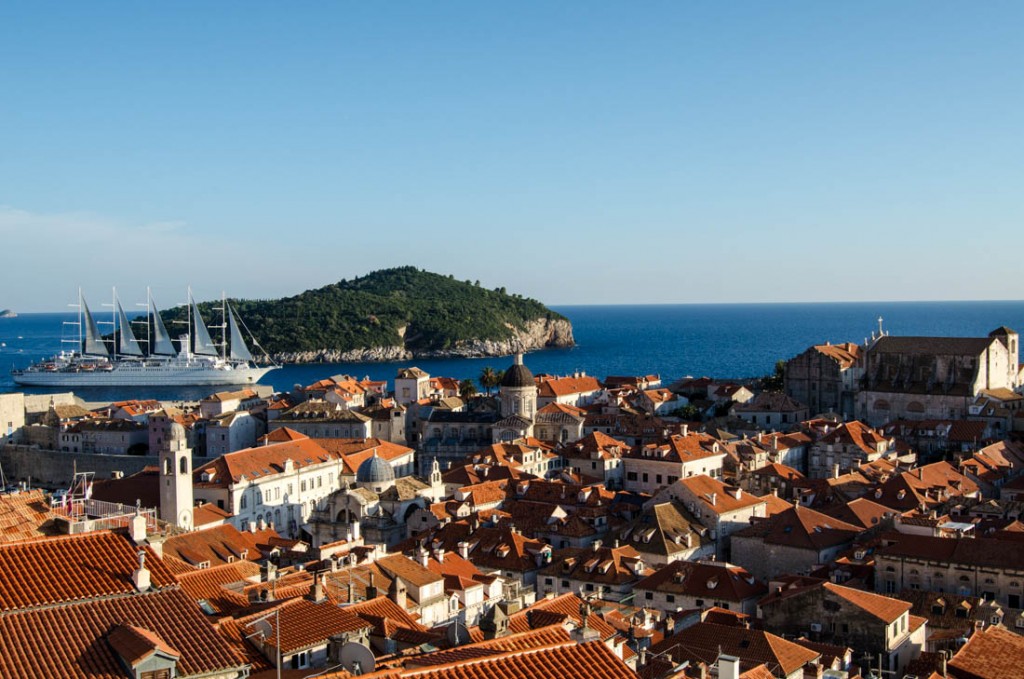 Our arrival in Dubrovnik was a sharp contrast to the five peaceful days we had just spent in Montenegro. As we got closer to the old town, we were swept up by the stream of tourists speaking a cornucopia of different languages trying to squeeze through the Pile Gate. Very few of these voices were speaking Croatian. Most Croatians actually move out of the old town during the peak tourist months to benefit from the high rents they can get from visitors, and many of those that do remain choose to rent out rooms in their homes (these rooms available for rent are called “sobe”). We had booked one of these types of rooms and were pleased to find it was down a low-traffic back alley behind the town’s main cathedral.

Back on the main streets, we encountered more Americans than we have anywhere else yet on our trip. Three mammoth cruise ships were docked in the nearby port, and their passengers were filing into the tight boundaries of the city’s old walls. Maybe you can tell by the tone so far, but we felt claustrophobic in Dubrovnik. We aren’t the only ones. Rick Steves begins his guidebook chapter saying that there is no doubt that Dubrovnik has been “discovered,” and the New York Times says, “Dubrovnik is no longer anyone’s best-kept secret.”

So, what’s the fuss all about? Well, even I—who found the atmosphere way too touristy—have to admit it’s incredibly beautiful. Nicknamed the “Pearl of the Adriatic,” Dubrovnik is a picturesque seaport whose walls rise up from sparkling blue water. The city blossomed over the centuries as a center of maritime trade and became the only city-state in the Adriatic to rival Venice. It managed to keep its independence while the rest of its neighbors were being folded into the Ottoman Empire, largely by paying bribes to maintain its autonomy. [Interestingly, this is why the city itself, including its main promenade the Stradun, seems very understated given its power and position… the citizens weren’t eager to flaunt their wealth to the Ottomans, who exacted payments based on how rich they perceived Dubrovnik to be]. 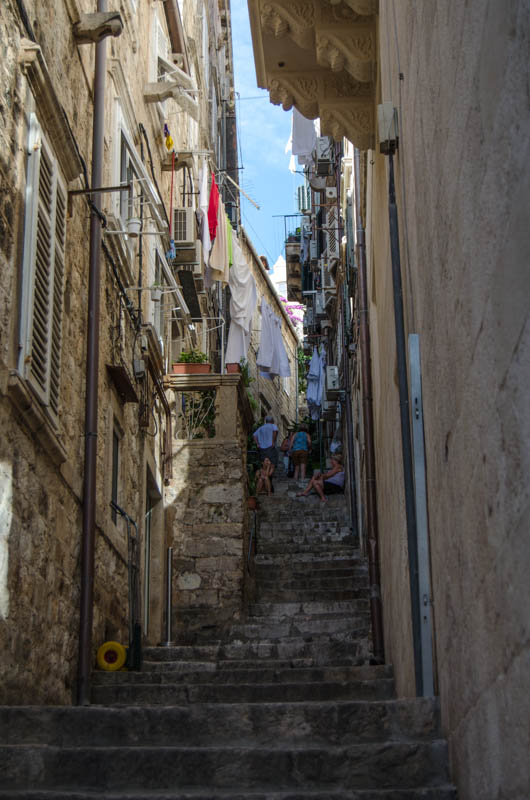 Croatia is also known for its fantastic cuisine. After his visit, Anthony Bourdain was nuts about Croatian food, and we were eager to try the seafood, pršut (prosciutto), cheese, and, of course, wine for ourselves. Chris and I had some fantastic mussels, calamari, and squid-ink risotto at Kamenice at a friend’s recommendation, and we liked it so much we went back again on our last night. We also got to try different types of Croatian wines, including white varieties like graševina, maraština, and pošip and red varieties like plavac mali.

But, by far, the main attraction of Dubrovnik is the city’s spectacular walls that encircle it. Visitors have the opportunity to walk the 2km continuous circuit on top and admire reinforced walls, the guard towers, the bastions, and the separate fortress of St. John. This powerful combination gave Dubrovnik one of the greatest defense systems of the Middle Ages and warded off every single invasion by hostile armies during that time. The walls are also why so much of HBO’s Game of Thrones has been filmed in Dubrovnik, including most of the scenes from King’s Landing and Qarth. 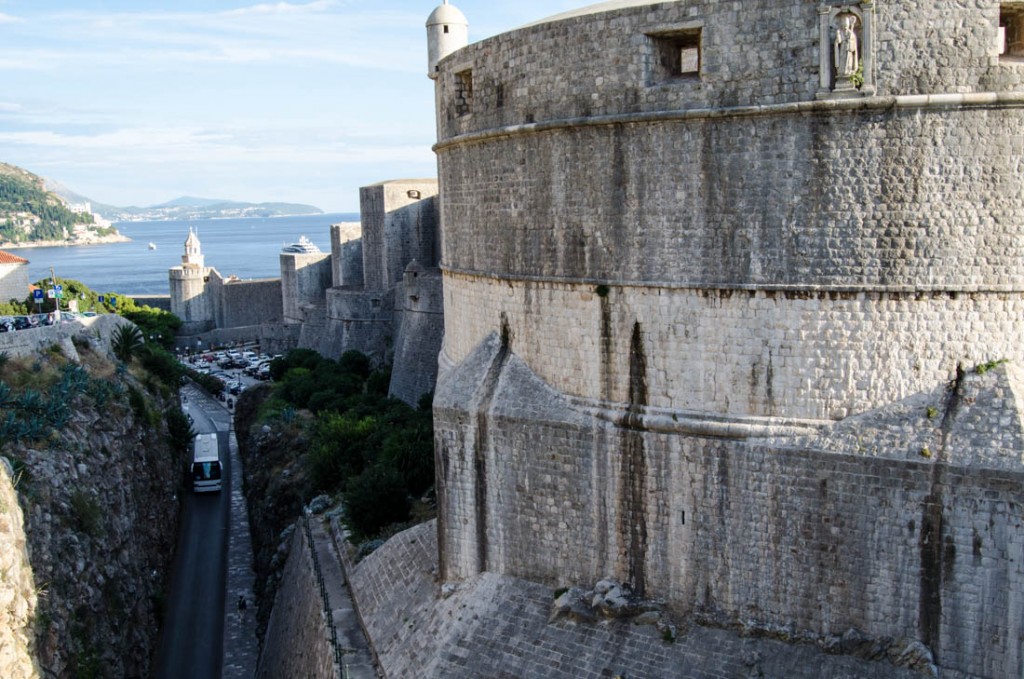 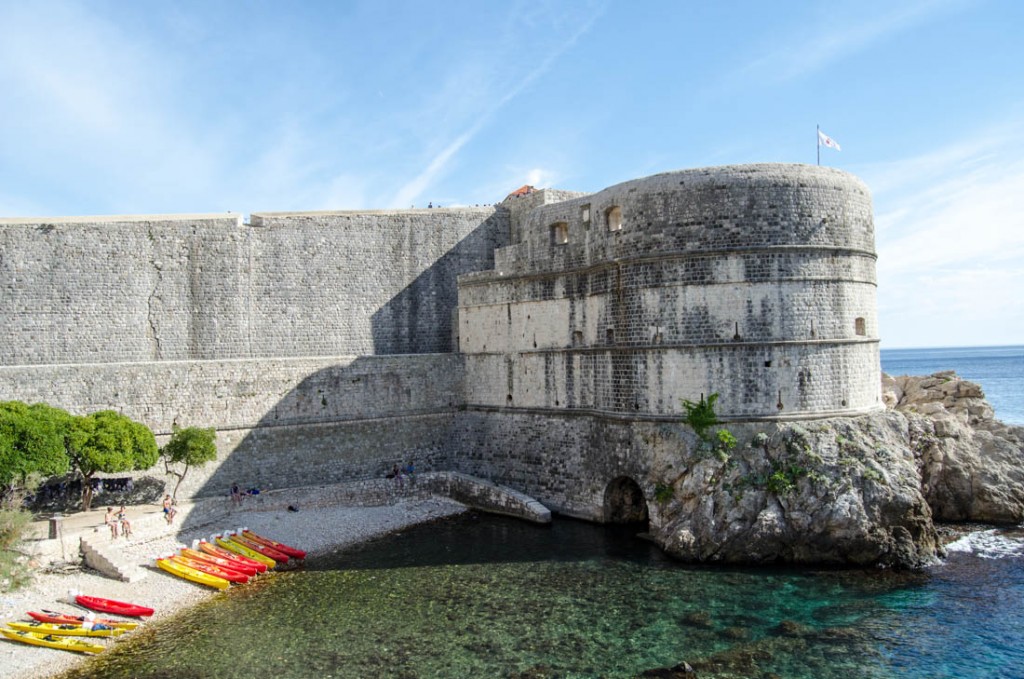 Even though we were put off by the crush of tourists and the picture menus, I’m still glad we saw the city walls and beautiful seaside town of Dubrovnik. But the best part of Dubrovnik was that we met up with our first visitors of the trip! An awesome group of our friends from Chicago will be traveling with us this week through Split, Munich, and Vienna. I have no doubt that it’s going to be a whirlwind and memorable week, and hopefully we won’t have to edit too much of the fun for the blog’s purposes 🙂

On our last night in the city, we moved with the group to an Airbnb close to the bus station and on the outskirts of town. We had an apartment up in the hills and a bird’s eye view of the Port Gruz, with its beautiful boats and sparking water, below. I finally got to see the real Pearl of the Adriatic. 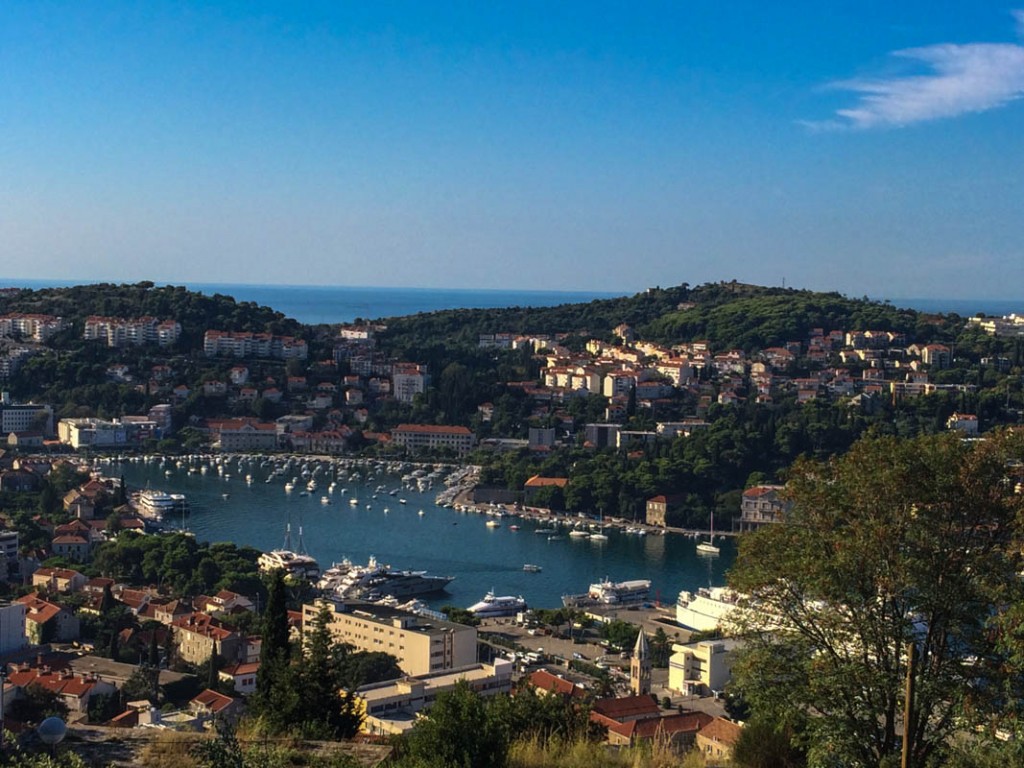