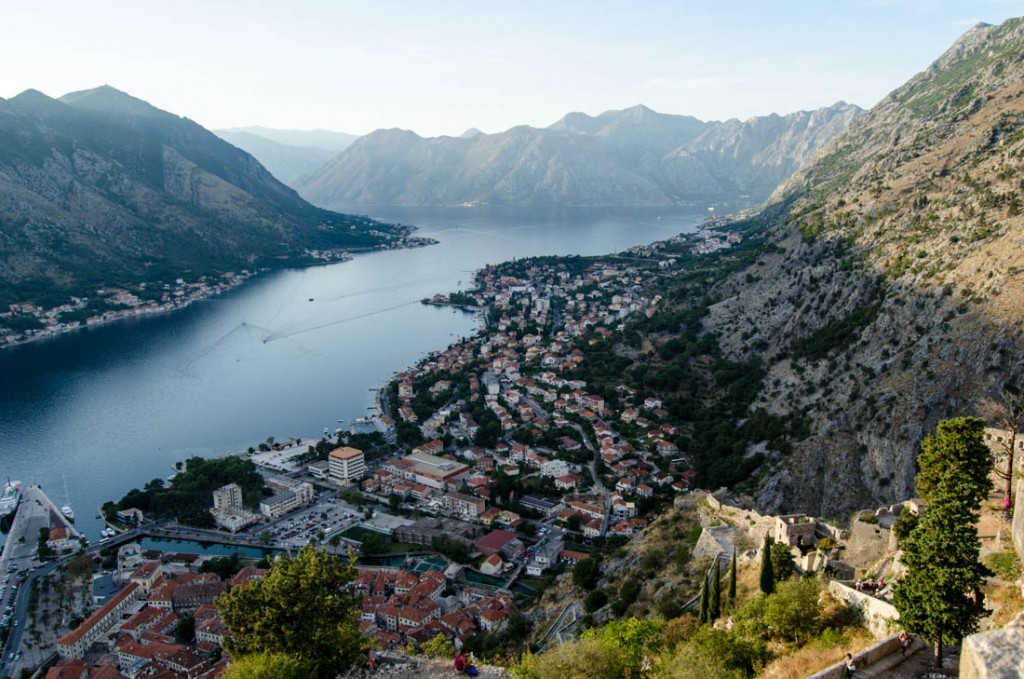 Hooked on driving after our Macedonia road trip, Chris insisted on us getting a car in Montenegro, which is famed to have some of the most beautiful drives in all of Europe. Our destination after Montenegro was actually on the way, so we decided to do a round-trip car rental from the Dubrovnik Airport. We took a bus from Mostar into Croatia (exit stamp Bosnia, entry stamp Croatia), passed through Bosnia again in the 9-km-long Neum corridor that juts into Croatia (exit stamp Croatia), entered back into Croatia (entry stamp), picked up our car in Dubrovnik, and then drove through Croatia’s southern tip into Montenegro (exit stamp Croatia, entry stamp Montenegro). All this happened in the span of about two hours, and I was surprised my passport wasn’t hot to the touch after from all that overwork. We’ll be repeating this process soon when we return to Dubrovnik from Kotor, and then again when we go on to Split further north. [Needless to say, our complaints about our lack of stamps as we passed through all the countries that are members of the border-check-less Schengen Agreement were put to rest.]

As we started the drive into Montenegro, we quickly realized that all of our hard border-crossing work was about to pay off. We ignored our Garmin’s instructions to take the shortcut of a ferry to our destination and instead chose to drive the long way around the Bay of Kotor. Along the coast of the Adriatic Sea, the stunning Bay of Kotor has 100km of shoreline and four gulfs. It’s the deepest fjord-like bay in the Mediterranean and is surrounded by steep mountains that seem to come straight up from the water’s edge. The water is the most crystal clear of blues and incredibly calm, since the double-bay layout offers so much protection from the sea.

We planned to spend five days in the innermost part near the ancient city of Kotor. Actually, we were tired of city living recently, so we decided to stay a little outside the main areas. Three nights at a budget-friendly Airbnb in the seaside village on the east side of Kotor and two nights in an apartment overlooking a local bar to the north of Kotor. These five days were absolute bliss. In this spectacular setting, we swam, kayaked, hiked, lounged, and went on a nail-bitingly fun drive. We didn’t have the greatest internet connection here, and I ended up thinking it was for the best since it forced us to unplug and just enjoy being seaside. I felt like I was at camp.

One day, we walked the 5km to the city of Kotor, huffed and puffed another 1km up to the ancient fortress that clings to the side of the mountain, and then made the 5km walk back (with our legs feeling like jelly) as the sun was setting over the bay.

The next day Chris drove me back to Kotor where I picked up a feast of cured ham and smoked cheese made in the culinarily-famous nearby village of Njeguši, fresh bread from the pekara (bakery), ripe peaches, and a bottle of Montenegrin wine, and we picnicked next to the water. Then we spent the afternoon trying to kayak across the entire bay to the man-made island Our Lady of the Rocks in Perast, though we ultimately had to turn back when the island wasn’t getting any larger, despite our best efforts.

The next day we drove up the mountain behind Kotor (a nerve-wracking but exhilarating drive Chris describes in detail here) and then hiked to the mausoleum of Montenegro’s national hero Njegoš.

Then, for the two days in our new digs across the bay, we relaxed on our deck and periodically dove off the dock of the bar whenever we felt like it.

Pure bliss. We absolutely loved Montenegro for the fresh air, clear water, rugged mountains, delectable seafood, and friendly people. It was great to take life at a slower pace for these five days. And good thing we did, as we’re about to kick off a whirlwind month of even faster-paced travel and will be joined by our first visitors! Stayed tuned.