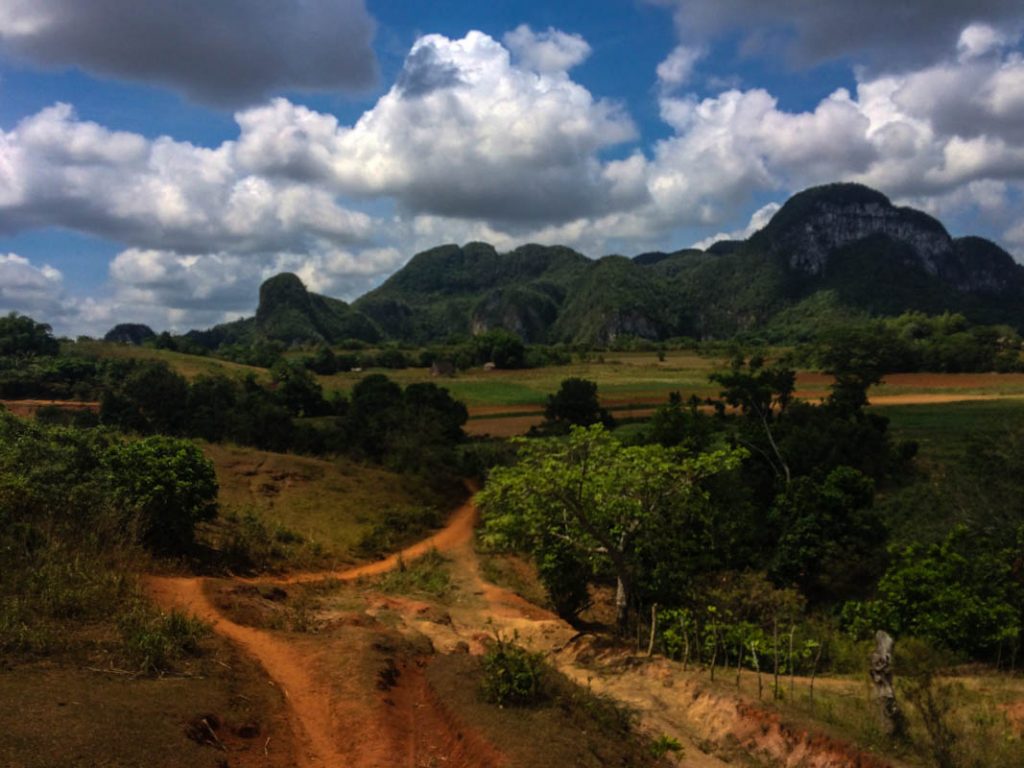 After three eventful days in Havana, we booked a taxi colectivo to take us the to Viñales, the tobacco country of Cuba. Based on all the cars we saw while walking around Havana, we weren’t surprised when the massive green tank pictured below rolled up. We were surprised though to find Mariah Carey’s greatest music videos playing on a TV mounted to the dashboard (that took up an alarming amount of window space) for the three-hour ride.

Arriving in Viñales (and unable to get “Always Be My Baby” out of my head), we were shocked by the drastic change of pace from Havana. Viñales is a sleepy agricultural and tourist town where all the small, one-story houses have rocking chairs on their porches and everyone in town has a room to rent. The dining scene on the one-street main drag wasn’t much to speak of, so we took advantage of the opportunity to have a feast of a dinner at our casa particular. We would need the sustenance for our four-hour horseback ride the following morning throughout the surrounding valley and tobacco plantations.

Viñales is in the heart of the Pinar del Río region, which boasts arguably the best growing conditions for tobacco in the world. All the embargoed cigar brands you know source their tobacco from here: Vegas Robaina, Partagás, and, of course, Fidel’s Cohibas. Although we had missed seeing the tobacco plants fully grown (farmers usually harvest them in February), we were still able to enjoy the valley scenery, the brilliantly red terrain, and the daily life of farmers that work here. As part of our tour, we went inside a drying house to see how tobacco leaves are distributed throughout the entire building to dry before moving on to the fermentation process. We learned that the farmers are required to sell 90% of their yield to the government (which pays little) and make most of their profits from the remaining 10% that they sell to tourists like us.

We met a local farmer whose larger-than-life personality was only matched by the size of his hat and the knife scabbarded at his side. He showed us how to roll a cigar by hand. While crafting the cigar, he told us that the local farmers use a different method of production than the country’s larger producers; their fermentation process is natural rather than chemical, they remove the central vein of the tobacco leaf that contains the majority of the nicotine while the factories leave it in, and they use natural agents like honey to hold the cigar tight. We soon had the chance to see for ourselves, and I was shocked to find I really enjoyed the few puffs I had of Chris’s cigar. It tasted like fruit and honey and wasn’t overwhelmingly strong. These unbranded Puro Cubanos are actually the cigars that most Cubans smoke since they are of high quality but lower cost. At only $1-$3 each, we bought the maximum allowed by customs to bring back with us.

We had a tranquil few days in Viñales before enduring the six-hour drive to the former French settlement of Cienfuegos. It is located on a bay, and here we enjoyed an amazing seafood dinner at Finca del Mar that would turn out to be our best meal in Cuba; the massive lobster pictured below was a splurge at 20 CUCs, but it would definitely have gone for 2-3x that in the states. Cienfuegos boasts dozens of huge old houses that were built during the sugar boom in the second half of the 19th century. The city is also home to Cuba’s most famous musician, Benny Moré, who was known as the “Prince of Mambo” during the 1950s and whose music Chris had been playing nonstop since we arrived. In Cienfuegos, I got the chance to try a Cohiba that Chris bought and would find myself coughing and grimacing from the overwhelming strength and strong flavor. Chris, a much more seasoned cigar smoker than me, enjoyed the Cohiba, while I definitely voted for the lighter, organic-farmer variety.

Next up was one night in Trinidad, a wonderfully-preserved Spanish colony filled with colorful houses and a picturesque main square. We spent most our time wandering around taking pictures, so there is not much else to say about Trinidad except that it was probably the prettiest place we visited while in Cuba.

Finally, our last night in Cuba—and on our one-year, RTW trip—was spent in Santa Clara since our charter flight to Tampa was scheduled to leave from that airport. Santa Clara isn’t much of a tourist destination unless you are a pilgrimage of the Che Guevara sights in Cuba. More than the protagonist of the movie The Motorcycle Diaries, Che Guevara was an extremely controversial figure in US-Cuban relations. I won’t go into the full backstory, but the gist of it is that Che was an Argentine doctor turned communist revolutionary that fought with Fidel Castro in the Cuban Revolution. Santa Clara is important to the Che story since it is the sight where he and a group of 18 rebels derailed an armored train carrying 350 government troops using just a bulldozer and homemade Molotov cocktails. That was the decisive victory against the Batista regime for the Castros, who have been in power ever since. While his actions seem heroic, he harbored a longstanding hatred for the US and called for “two, three, many Vietnams” to start in the Americas. He was killed trying to do just such a thing in Bolivia, and his remains were moved back to Santa Clara where they are housed in a mausoleum under a giant statue of the man.

Ending our 10-day tour of Cuba in Santa Clara was appropriate since it offered us the opportunity to reflect on what type of system guerrillas like Che helped create. True, Cuba has been praised in the international media for its cost-effective and widely-available education and healthcare systems. And, although the Castros live like kings (and I wonder what Che would think of that), there seemed to be relative income equality among the people that we saw in the five cities we visited. But that range of income is still extremely low compared to non-communistic societies, and Cuba suffered for decades from its lack of competition and innovation. We saw some of this firsthand as we waiting in long lines for internet or bank services or watched locals deal with systemic shortages in grocery stores and restaurants. For instance, the only ice cream on offer at the celebrated Coppelia shop (remember the line of people from my first Cuba post?) was coconut when we visited.

But things are looking better for Cubans nowadays. Since limited privatization was allowed in 2011, the country’s restaurant and hospitality sector has been undergoing a renaissance. There is still communist messaging and posters of Che’s face everywhere, but also American flags are starting to pop up as well. My hope for Cuba is that it continues to open up and prosper as relations improve with America, but I also hope it never looses its open-door, music-blaring, patio-sitting culture that has helped the people endure over the last five decades.