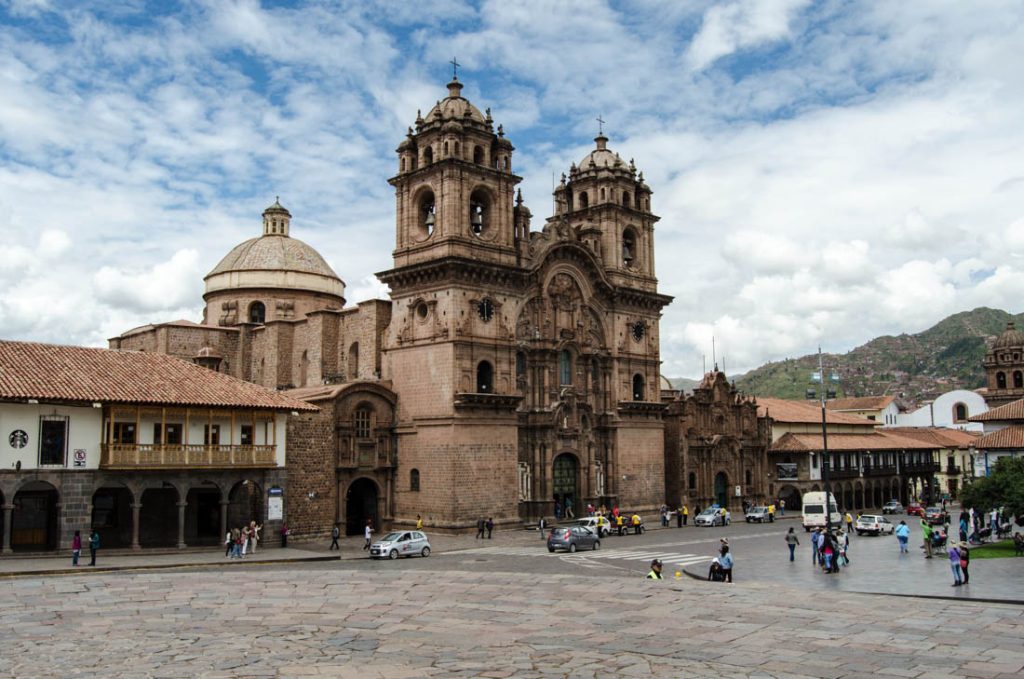 It made not only geographical sense but also historical sense to next go to Cusco (aka Cuzco)—the historic capital of the Inca Empire—after our visit to Machu Picchu. Situated up in the mountains, Cusco sits at 11,200 feet, and we immediately felt the effects of the elevation as we trudged up the steep path to our hotel. With Inca ruins, colonial buildings, and pretty cobblestone lanes, Cusco is an extremely pretty city that begs to be explored.

But, sadly, the elevation stunted our usual sightseeing vigor, and all four of us felt varying degrees of the dizziness, exhaustion, shortness of breath, and difficulty sleeping associated with altitude sickness. Denise, who is a medical doctor, had brought along chlorophyll drops (which help to increase your red blood cell count and thus hopefully your body’s ability to absorb oxygen) that I dutifully took each day, but I think their benefits were limited by the fact that I didn’t take them ahead of time. I pretty much felt the same as Chris, who declared the drops to taste like “liquid grass” and swore them off from the start. Anyways, here is what we did manage to see during our two nights in Cusco.

As the self-appointed tour guide, I took our little group around the Lonely Planet walking tour of Cusco. Along the route we saw old colonial buildings, pretty plazas, and ornate churches. The most prominent places at the Plaza de Armas (main square) is cathedral, a huge structure build in the mid-16th century and filled with many doll-like saints and religious figures. There’s even a famous painting of the Last Supper in the cathedral, except the dish of honor at the table is cuy or guinea pig. [No photos allowed in the cathedral, but click here to see the painting]. 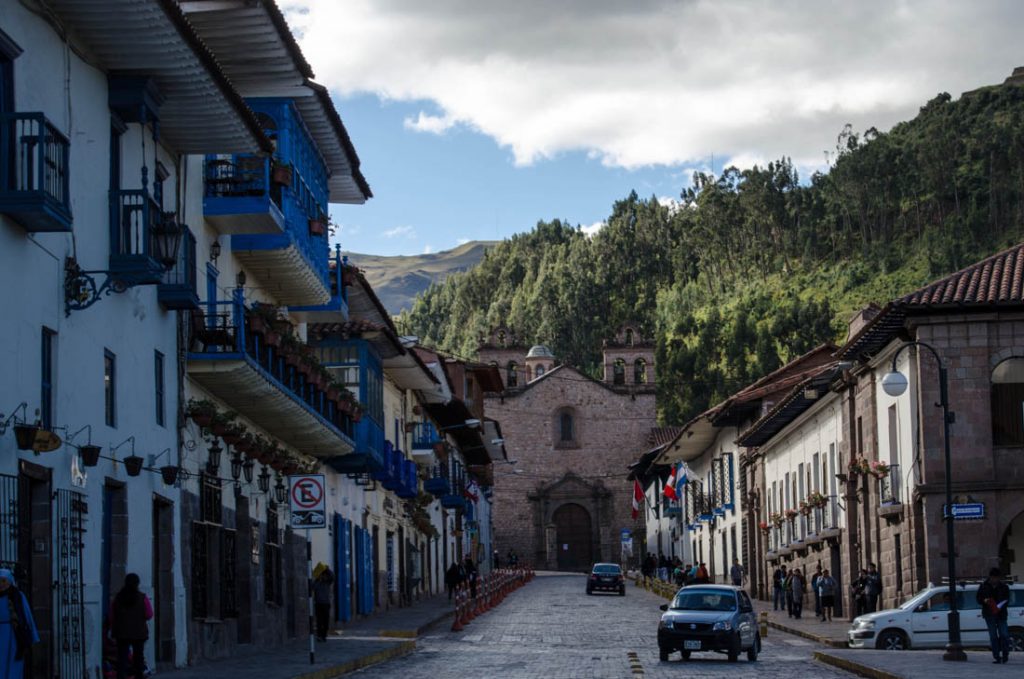 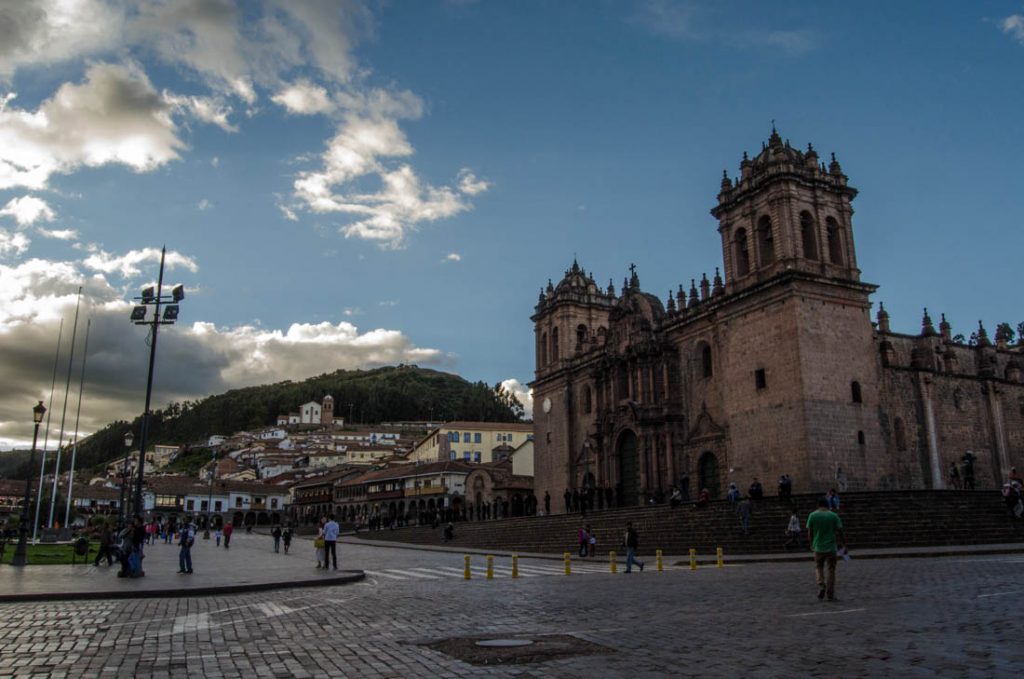 Out of respect for pet lovers and vegetarians, I didn’t include the photo I took of a restaurant offering roast guinea pig (but if, like me, you are intrigued by foreign customs, you can see the photo here). Guinea pig has actually been eaten for centuries—long before folks in the West started giving them to their kids as pets—and you can try the dish at most restaurants in Cusco. We wouldn’t get our chance, however, until later on in Lima. Much less cringe-worthy is the pisco sour, a grape brandy drink that both Peruvians and Chileans lay claim to. Either way, this fantastic drink made with lime juice, simple syrup, an egg white, and bitters has become one of my favorite cocktails ever since I first tried it on our first trip to Argentina in 2011. Our group became pisco experts during the course of our week in Peru.

Also in Cusco we had the chance to meet up with another amazing RTW couple. We unbelievably ran into fellow traveler Andrew on the street (the third time thus far on our trip when we spontaneously bumped into someone we knew halfway across the world) and made plans to meet him and his wife Adrienne for drinks the next day. Chris and I hadn’t met Andrew and Adrienne before in person, but we were introduced electronically through mutual friends at the start of our trip. I’ve followed their simply incredible Instagram accounts (his and hers) ever since and hoped that one day our paths would cross while traveling. Little did we know how true “crossing paths” would be until we met each other on a cobblestoned street in Cusco. With so much to talk about and share, drinks turned into dinner, dinner turned into more drinks, and before we knew it, we had two fantastic new friends.

We left Cusco with conflicting feelings: eager to get down to a lower altitude, but also sad to leave such a quaint, pretty city. Landing in Lima, we could immediately breathe easier, but other than that, the city did not give us a very good first impression. Lima was dusty brown, industrial, and incredibly congested. It didn’t help that we arrived only a few days before the country’s presidential election, and every square inch of available space was covered with political ads. Thankfully, as we drove away from the airport and into the neighborhood of Miraflores where we would be staying, things got much greener and cleaner.

Upon further investigation, we discovered that Lima has pockets that are very nice. Namely, the upscale neighborhood of Miraflores and trendy area of Barranco. We did venture into the grittier downtown on one of our days, and the group good-naturedly suffered through another one of my city walking tours. Justin perked up when we entered the Cathedral of Lima that houses the remains of conquistador Francisco Pizarro. After our visit to Machu Picchu, he became very interested in Inca history and put my tour guiding to shame with his recount of the bloody Spanish Conquest and the Fall of the Inca Empire. Pizarro was responsible for the subjugation of the Inca people and the decline of their culture, and his continued position of honor in the cathedral is not without controversy. 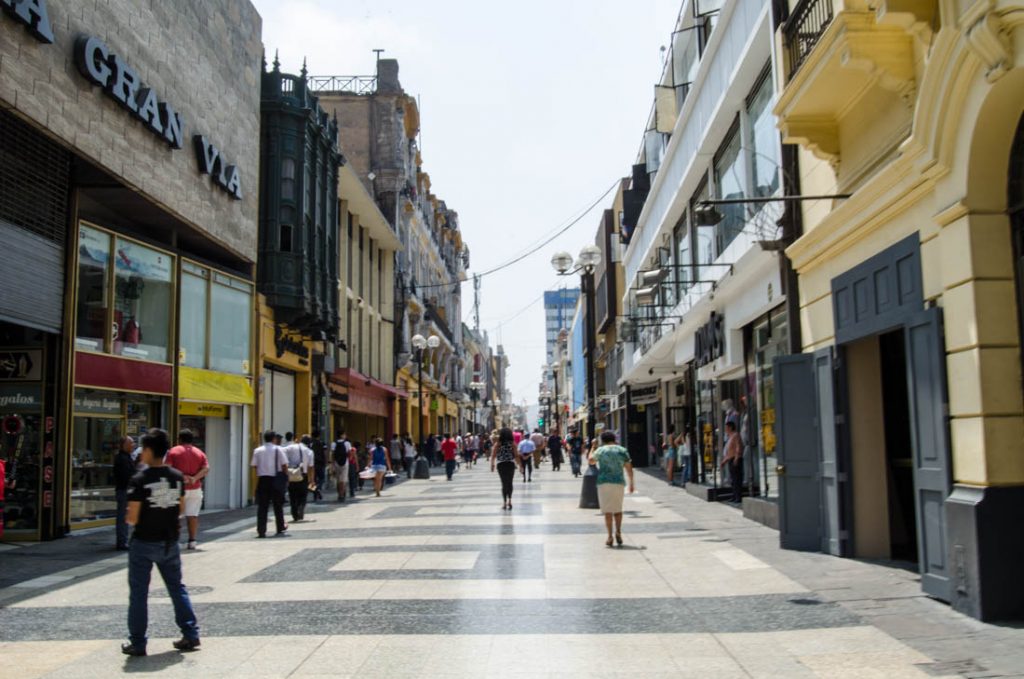 We also learned that Lima is regarded as the gastronomical capital of South America. We did our best to put that claim to the test and were happy to report back about several fantastic meals during our time there. We had some amazing ceviche (fresh raw fish cured in citrus juices), more pisco sours (including at one of the places that claims to have invented them), decadent steaks and seafood, and addicting sandwiches. On our last night together we dined overlooking ancient Inca ruins while the entire Peruvian Congress joined us on the patio outside.

Between an overnight in the airport, two nights exploring Aguas Calientes and hiking up and around Machu Picchu, two nights clamoring around the town of Cusco, and two nights exploring and eating our way through Lima, we had an action-packed week in Peru. It will definitely go down for us as having some excellent food, one of the world’s greatest national heritage sites, and a fun place to have adventures with best friends halfway around the world.