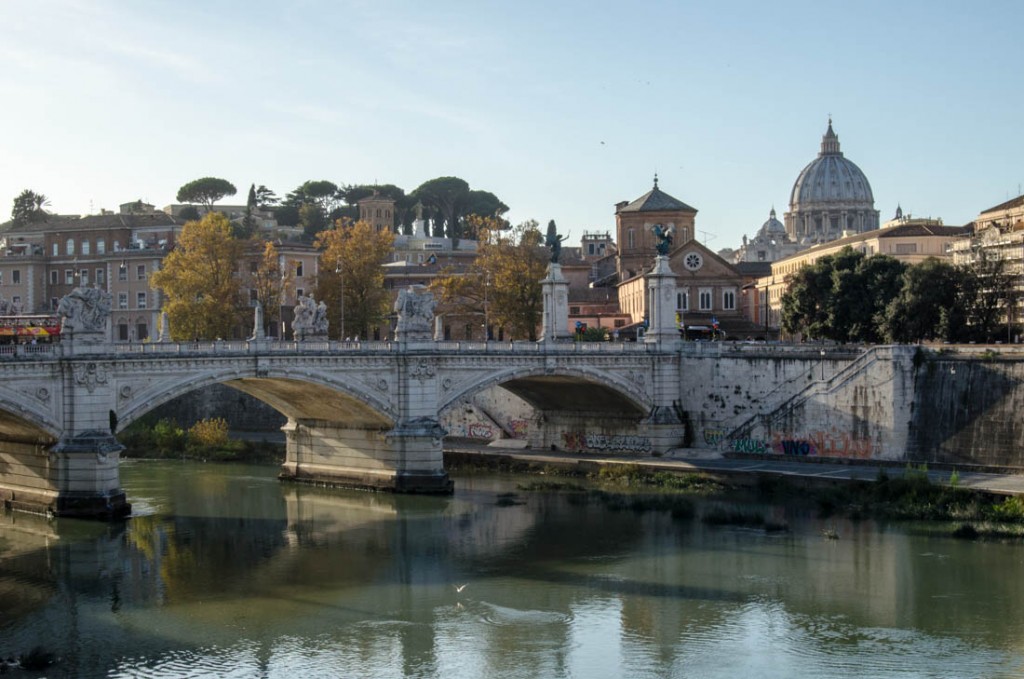 Outside of meeting and marrying my husband (and ever since, as he pointed out during the editing phase of this post), the four months I spent studying abroad in Rome, Italy in 2006 were some of the happiest times of my life. My undergraduate alma mater, Kalamazoo College, has a wonderful study abroad program that sends 4 out of 5 students to a faraway place for a semester or two during their junior year. Early on, I had my heart set on studying in Italy. My grandfather’s family emigrated from Sicily and, even though my genealogy is a mixed bag, the Italian ties have always been the strongest in our family (it helped too that I had a very Italian last name for most of my life… a name with a very cool meaning). And so I took a break from my economics major to learn about Caesar and Augustus and da Vinci and Michelangelo. Myself and eleven other students from my school packed our bags and bid farewell to K-College and ciao to Roma for the fall term.

My classmates and I lived in Trastevere, an authentic and gritty neighborhood across the Tiber on the southwest side of Rome. We shared rooms in a small apartment and rode a rickety old elevator up and down each day. We knew our building from the gelato shop on the corner and quickly became regulars. We shopped at the local store and bought huge balls of the freshest mozzarella for under a dollar. We learned how to make pesto. We, admittedly, sometimes got sick of pasta and found a great Chinese place down the street. We knew to never run the hot water heater and the washer at the same time. We hung our clothes out to dry on the balcony. We took classes at the American University of Rome and had to walk the 2 kilometers uphill to class whenever the transit workers were striking (which happened more than once).

I took courses in Italian and ancient history, of course, but my favorite classes were the two that met only once per week but at different sites throughout Rome. I learned about Raphael, Michelangelo, Caravaggio, and Bernini by visiting the Vatican Museums, the Basilica of Santa Maria del Popolo, and the Capitoline Museum, to name a few, and seeing their paintings and sculptures with my own eyes rather than through a textbook or slide show. At a lesson among the ruins of the Roman Forum, the grandeur of ancient Rome was brought to life for me. And whatever there was left to see I learned from my classmates, many of whom were accomplished art history and classics students. We had a list of all the sights to Rome, from the biggies like the Colosseum to the out-of-the-way church that was blessed with an under-appreciated Bernini statue.

And my absolute favorite… the Pantheon. Of course, I appreciate how it is the best-preserved building in ancient Rome and perhaps one of the greatest structures ever in art history. But it is the sheer unearthliness of it that always leaves me in awe. I never fail to be surprised by the huge concrete goliath as it suddenly emerges when approached from the narrow lanes that surround it, and I feel like I’ve tumbled through time or onto another planet. Its magical eeriness is only intensified at night, which is the absolute best time to see it.

Learning about Ancient and Renaissance-era Rome while standing on the ground where Julius Caesar and Michelangelo once trod was perhaps the most special thing I remember nine years later from my time as a student here. But I was on college study abroad, after all, and did manage to enjoy Rome for other things other than learning. I had yet to cultivate a refined appreciation for wine (at 20, I was of legal drinking age in Europe but not in the U.S.), although I could appreciate a good pitcher of house wine when I saw it. When the wine store was closed and my roommate and I had to drum up something for a bring-your-own house party, we improvised with the only other thing we could get our hands on… Limoncello. Now a tiny glass of this sticky sweet lemon liqueur may be tasty after a meal, but a whole bottle split between two girls made for a serious stomachache (but also quite a funny memory).

And, of course, the food. There’s no where else in the world you can visit on a reasonable budget and eat as well as Italy. The pasta, oh, the pasta! Spicy arrabbiata, rich carbonara, and savory amatriciana. Then there’s prosciutto e melon, caprese salad, pecorino cheese, and mouthwatering pizza. And who can forget about gelato… the world’s greatest dessert and done nowhere better than Italy.

In case you couldn’t already tell from all the pictures above, I recently had a chance to return to Rome on our RTW trip. While I was home in Michigan for Thanksgiving, Chris and my mother-in-law Sara were touring around Italy, hitting up the all-star destinations of Venice, Cinque Terre, Florence, and Rome. Thankfully (because otherwise I would have died of jealousy if I missed out on Italy), I was able to squeeze in a few nights in Rome before Sara headed back to the U.S. We had an action-packed day visiting the Vatican Museum, the Sistine Chapel, and St. Peter’s Basilica. I’m so glad I got to go with her on this day; it is a real thrill to be with someone as they take in the gigantic interior of St. Peter’s for the first time. We also hoofed it up the nearly 600 steps to the top of the dome for a panoramic view of Rome.

It was wonderful to be back in Rome nine years after my study abroad and to share the city with two people I love. I truly believe it is one of the greatest places on earth. Rome is filled with ancient ruins and stories from the greatest empire our world has known, paintings and sculptures from the greatest masters living in the greatest era for art (the Renaissance), and beautiful fountains, cobbled streets, and a people with one of the greatest capacities for enjoying life and savoring La Dolce Vita. I have to admit that I’m definitely biased towards Rome. After four beautiful months there, I can’t help but think its il migliore.