As sad as we were to leave Moscow, we were pumped for the four nights in St. Petersburg—the cultural capital of Russia—we had ahead of us. And with a spontaneous business class upgrade on S7 Airlines (we ended up taking a quick flight rather than the train between the two cities) and free champagne and dessert upon arrival at the Radisson Royal Hotel St. Petersburg, we were off to a great start.

Although it is very young as far as major European cities go, St. Petersburg has had a fascinating history. It was founded by Tsar Peter the Great in 1703 and named the city in St. Peter’s honor. Peter the Great traveled extensively across Europe and sought to make his city in the image of great European capitals. People often call St. Petersburg the “Venice of the North,” but we learned on our walking tour that Peter the Great had never actually been to Venice but instead tried to emulate Amsterdam’s patterns of streets and canals.

St. Petersburg was the imperial capital of Russia for roughly two centuries, ending in 1917 with the February and October (Bolshevik) Revolutions and the overthrow (and eventual execution) of the royal family. Remember the cartoon movie Anastasia? Well that little princess and her family were the last in the Romanov line to live here in the Winter Palace. 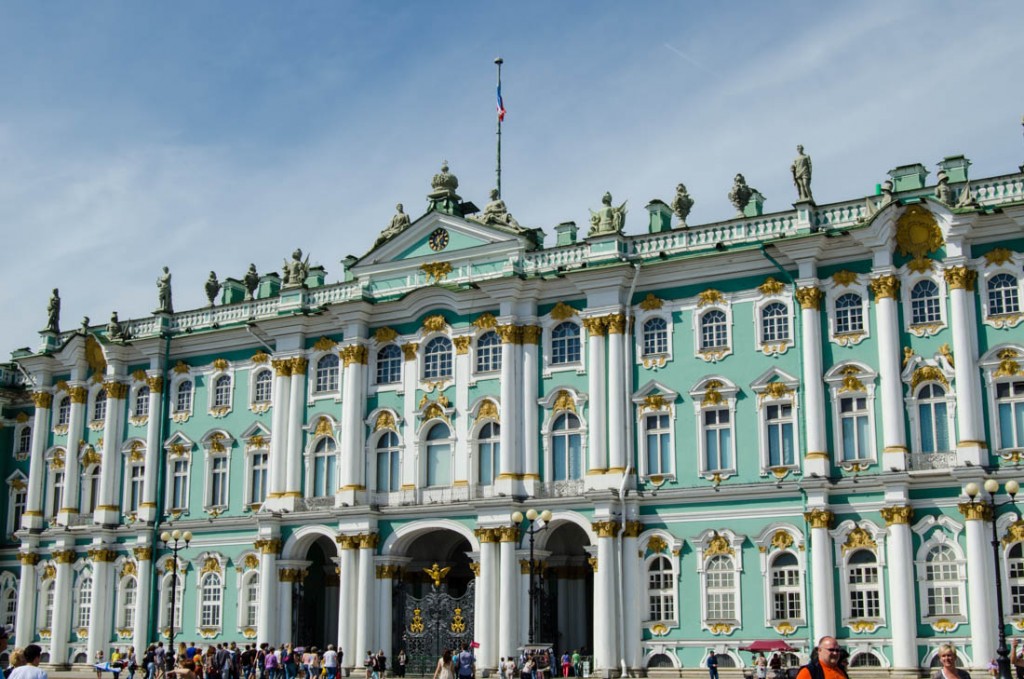 Signs of unrest leading up to the 1917 overthrow can be seen in the city still today. In 1881, a revolutionist threw a bomb under the carriage of then-Tsar Alexander II. Because this was not the first attempt on the tsar’s life, the carriage was bulletproof and the tsar emerged rattled but unharmed to confront his attacker. It was then that another conspirator threw a second bomb at his feet, mortally injuring the tsar who died a few hours later. Alexander II’s son, Alexander III (the Romanovs were very original, I know), subsequently built a church on the site where his father was attacked. Ironically for the revolutionists, Alexander III was actually much more conservative than his father, and the ensuing decades resulted in a great setback for civil reform (that ultimately helped pave the way for Bolsheviks down the road).

The church is named Church of the Savior on Spilled Blood and was built—over 300 years later—in the medieval Russian style of St. Basil’s Cathedral in Moscow. Inside, the church is decorated with intricate mosaics of biblical scenes and figures.

Back to the city itself, the communists officially moved the capital to Moscow in 1918, but that wasn’t the end of the excitement for St. Petersburg. In 1924, three days after Lenin’s death, it would be renamed Leningrad, which it would remain until 1991. And Leningrad would prove to be an unlucky name for the town. During World War II, Leningrad was besieged by the Germans for a total of 29 months. The city was constantly bombed and shelled on Hilter’s orders to destroy the city (all but the Astoria Hotel, which he intended to have his victory party), and its citizens were starved to death. 1.2 million of the city’s 3 million inhabitants lost their lives during the siege (and many more that were unregistered), but Hilter’s army was never able to enter the main part of the city. Our walking tour guide told us how the residents would paint the tops of buildings on wood planks over the city’s rivers to trick German pilots and how they even covered this famous statue of Peter the Great in trash to protect it from bombs.

The Winter Palace was used as a bomb shelter during the siege, and many of its treasures were evacuated right before the German army closed the siege ring. Today, the Winter Palace contains one of the most famous museums in the world, the Hermitage. Originally founded by Catherine the Great in 1764, it was intended to be a place of retreat and seclusion (hence the name). We toured the museum during our time in St. Petersburg and took in the palace’s ornate rooms and famous art works, including pieces by Michelangelo, da Vinci, Rembrandt, Rubens, Monet, van Gogh, Matisse, and Picasso. 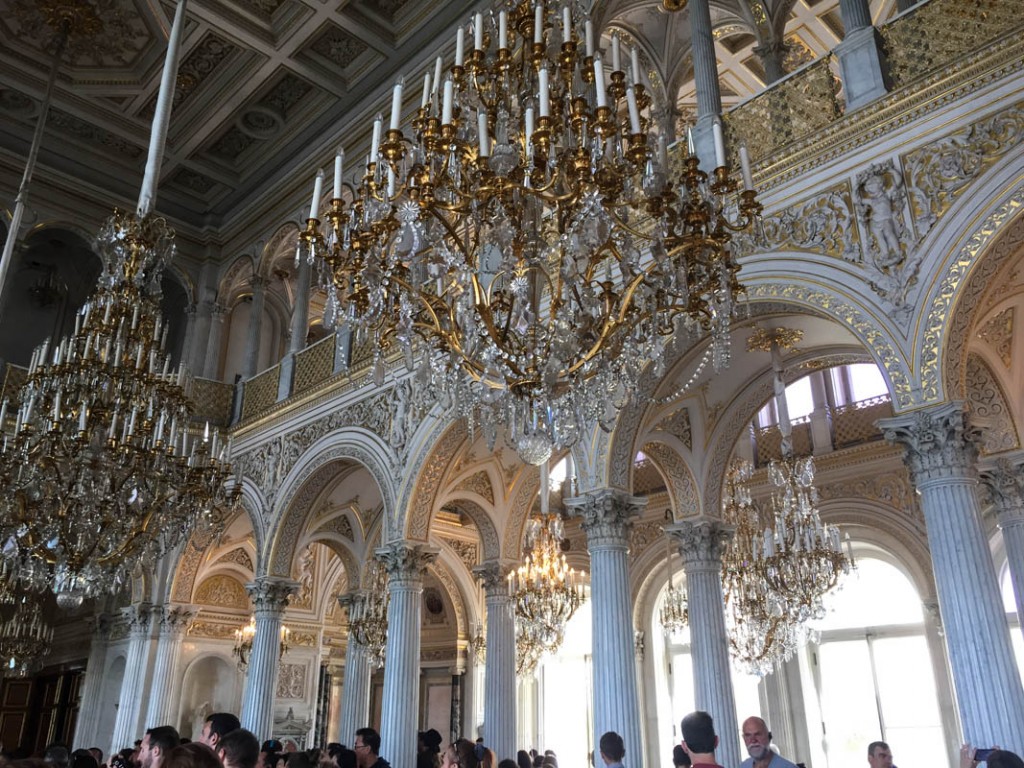 We weren’t finished with St. Petersburg’s spectacular sights yet. In addition to founding the city, Peter the Great also laid out orders to build a massive palace in the countryside modeled after Versailles. Chris and I hopped a ride aboard a hydrofoil and spent an afternoon wandering the gardens and admiring all the unique foundations surrounding the palace. Hilter’s army looted Peterhof during the Siege of Leningrad, but it has since been rebuilt to its former glory. 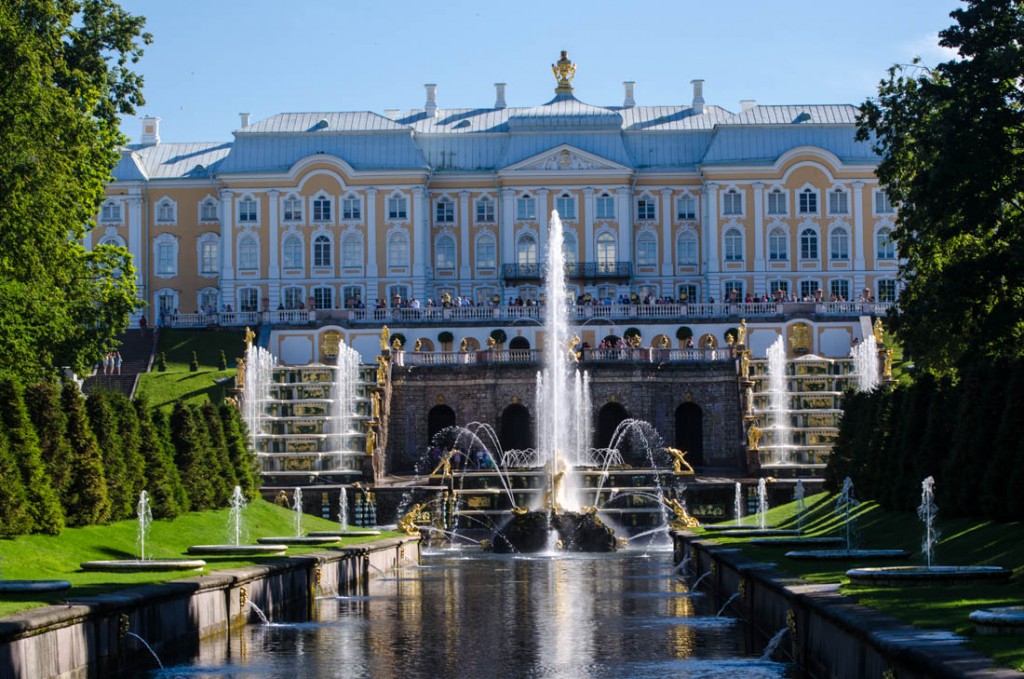 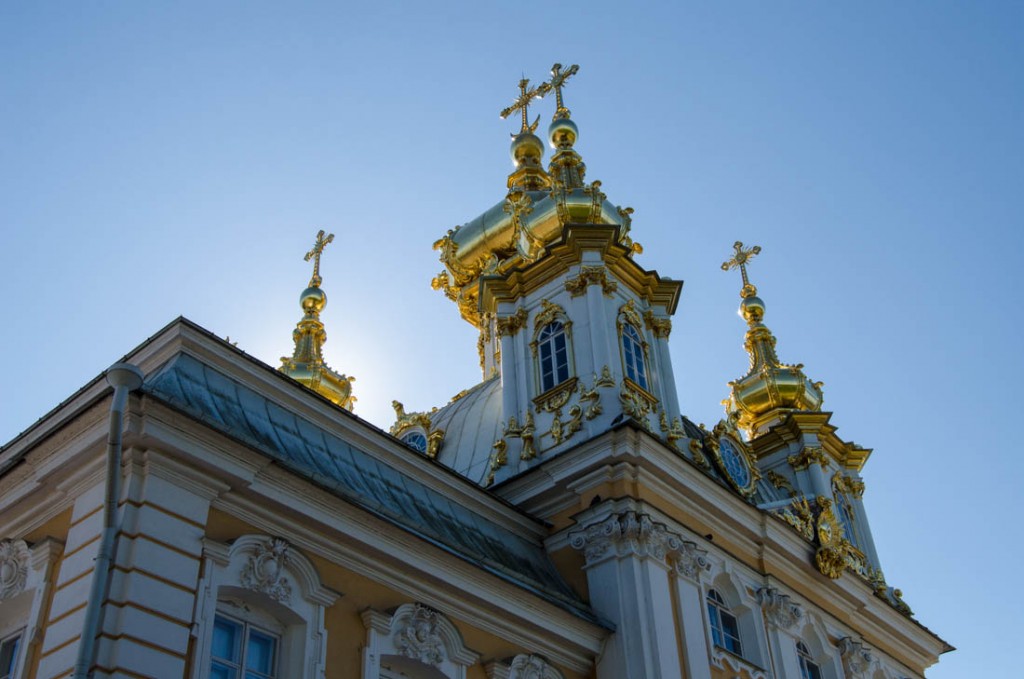 And, of course, no Redhead Roamer city guide would complete without talking about food! Continuing on our Russian culinary adventure that we started in Moscow, in St. Petersburg we tried the (in)famous borscht, which actually was surprising good since Russians keep the beets and other vegetables in pieces rather than pureeing the soup, and ukha, which is a clear soup with fish and root vegetables. With all their cold winters, Russians love their soup. Blini, made of buckwheat and topped with things like sour cream, red onions, and caviar, were also everywhere.

Pelmeni are Russian dumplings that reminded me of ravioli meets potstickers. Pirozhki are small stuffed buns filled with meat, cheese, vegetables, or fruit. Not to be confused with pirogi, which are amazingly delicious pies filled with sweet or savory stuffings and different from pierogi, the Polish potato dumplings we’re more familiar with in the U.S. (that are actually closer to Russian pelmeni). Confused yet? Well there is also pyshki, a wonderful fluffy donut we ordered… and then promptly went back for seconds.

And thus ends our Russian adventure. We had an incredible time taking in its grand buildings, walking the streets filled with so much history, and sampling its distinctive local fare. Despite all the pains it took to get a visa and our frequent state of confusion trying to decipher its language, Russia was an absolute treat to visit. Now, all aboard the Allegro express train, St. Petersburg to Finland!