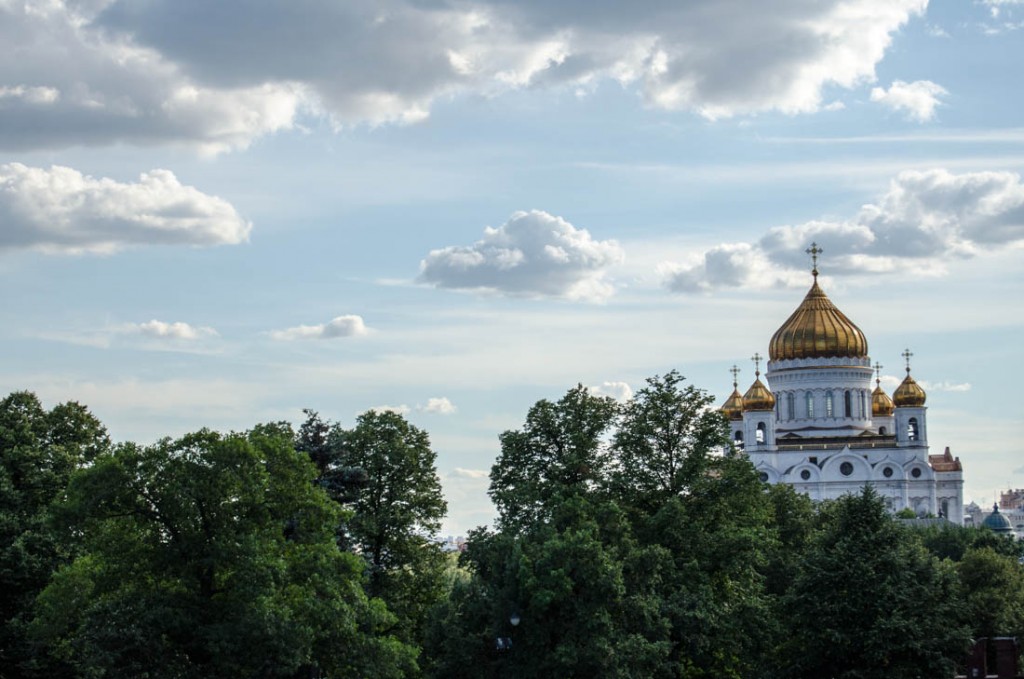 Outside of our time exploring the Kremlin and the metro system, Chris and I spent a lot of time in Moscow doing our two favorite things: walking the streets and trying the local fare. We had been expecting harsh, Soviet-era buildings before arriving in Moscow, but what we found was elegant European architecture. Grand buildings, beautiful promenades, fountains… and everything looked so magical lit up at night, which comes very late here (it didn’t start getting dark until after 10pm). 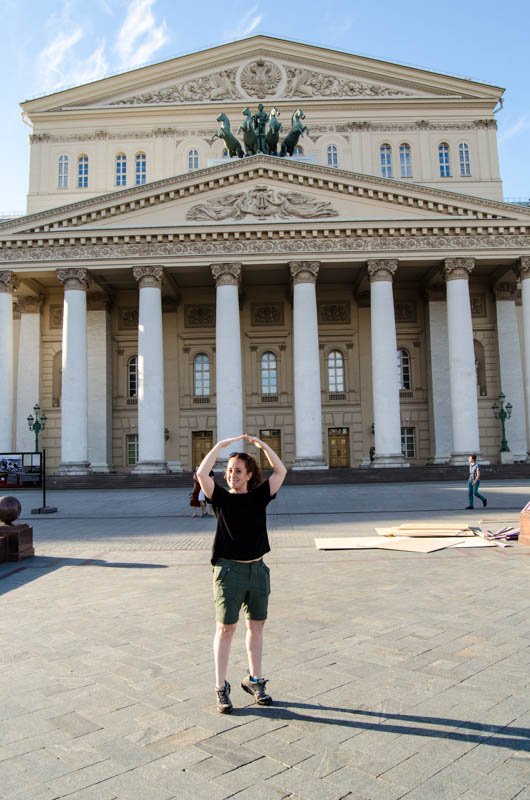 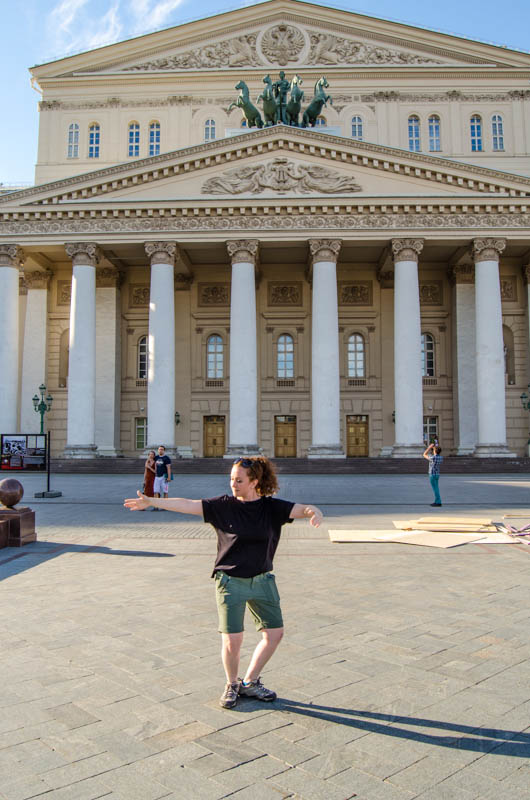 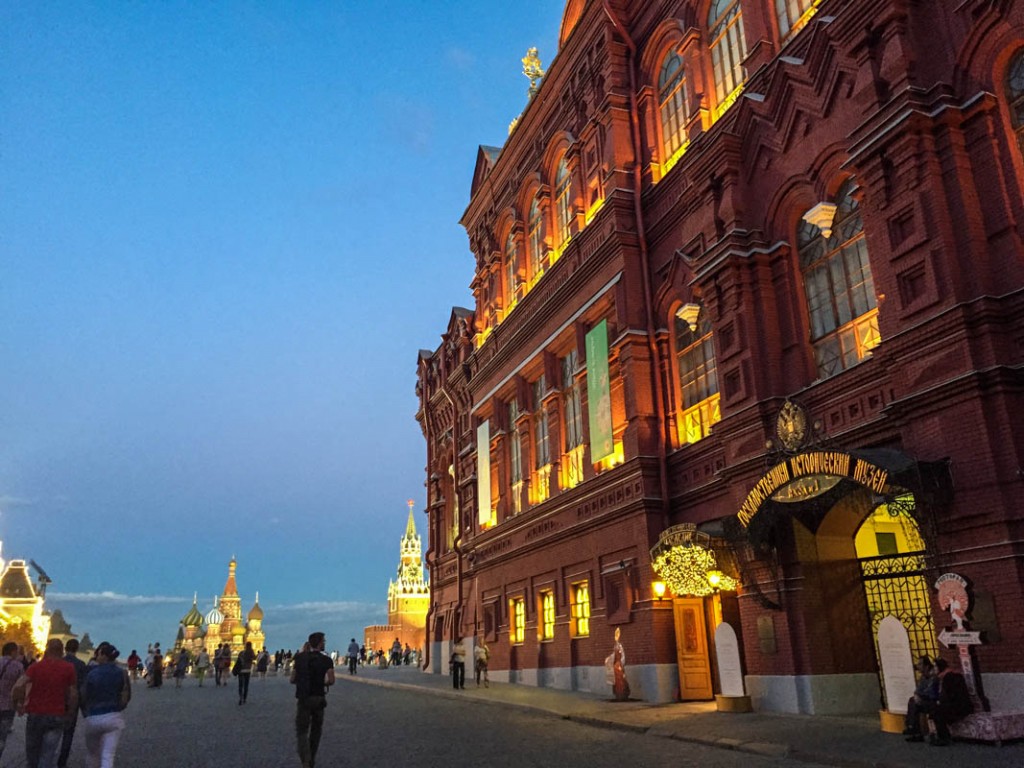 As the tallest church in the Orthodox Christian world, the Cathedral of Christ the Saviour is one sight visible from most areas on the city center. It was constructed on orders from Tsar Alexander I after Napolean retreated from Moscow to give divine thanks for saving the Russian people. This church was also the site of the world premiere of Tchaikovsky’s 1812 Overture.

Sadly, the original church is no longer after Stalin ordered that it be destroyed in 1931 as part of his antireligious campaign. The plan was to construct a colossal Palace of the Soviets (including a gigantic statue of Lenin with his arm raised perched on top of a dome) on the palace where the cathedral formerly stood. However, the Soviets were short on funds (they even sold the gold from the domes of the original church) and the palace never came to be. The gaping hole in the ground was actually transformed into the world’s largest open-air swimming pool for awhile under Khrushchev. The church today was rebuilt in the 1990s. 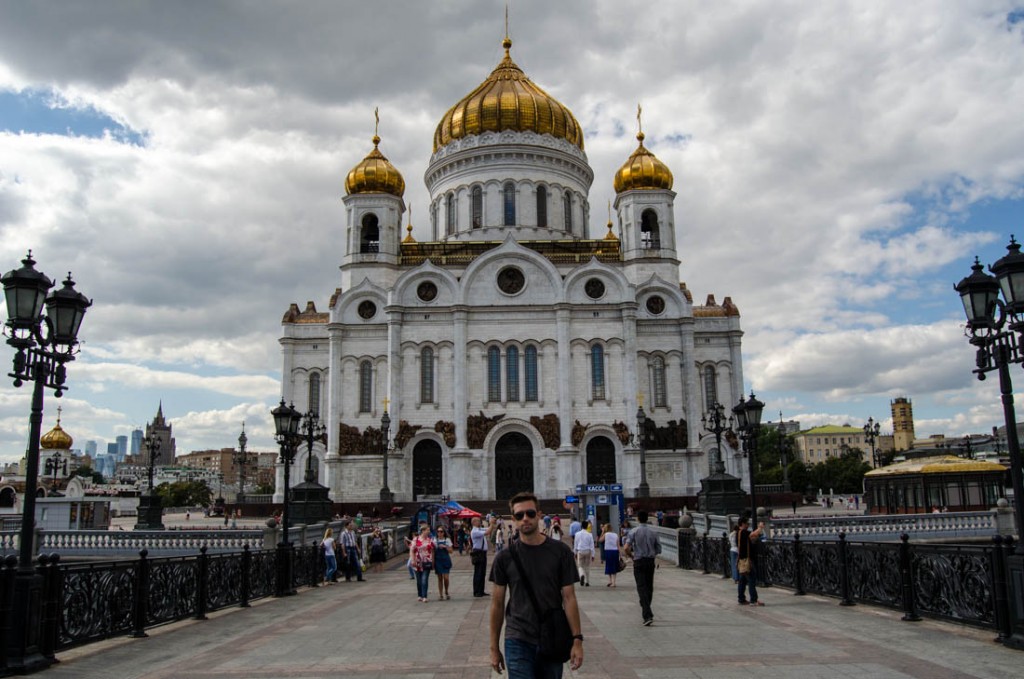 Russia isn’t particularly known of its cuisine, but we did our best to sample the highlights. Stolovaya № 57 is a throwback, Soviet-style cafeteria and an affordable oasis in the otherwise exorbitant GUM department store. Here, we were able to try a smorgasbord of classic Russian dishes, and the prices were so good we came back the next day. Some of the oddest dishes we sampled were herring under fur coat (for the shredded beets and vegetables on top) and beef tongue salad. 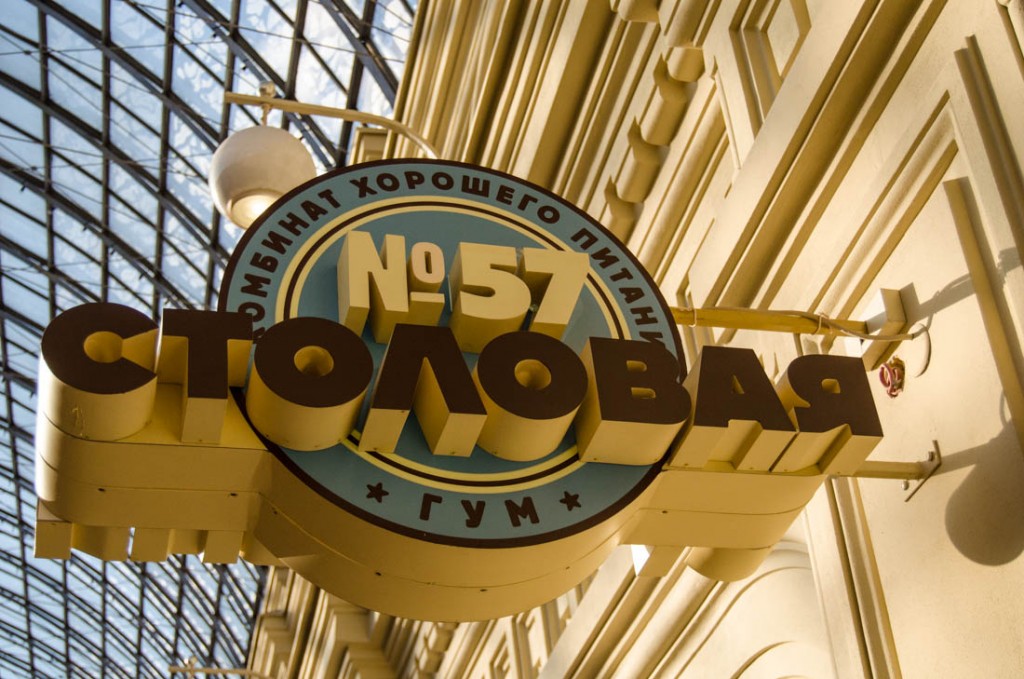 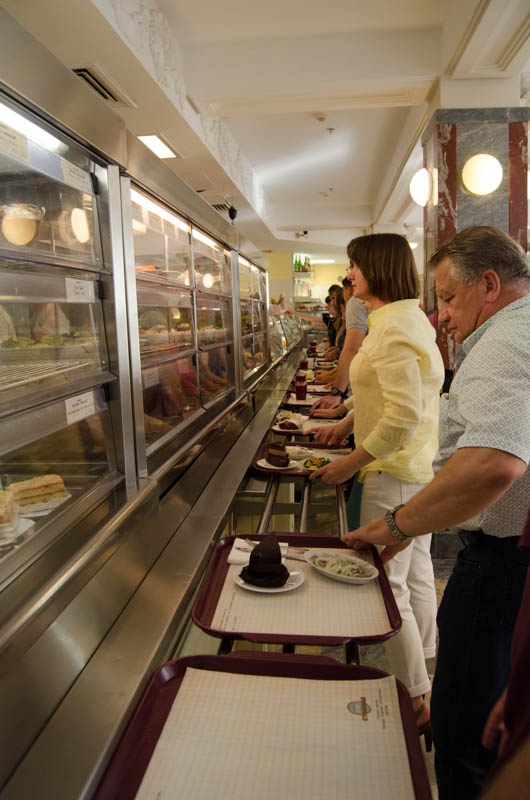 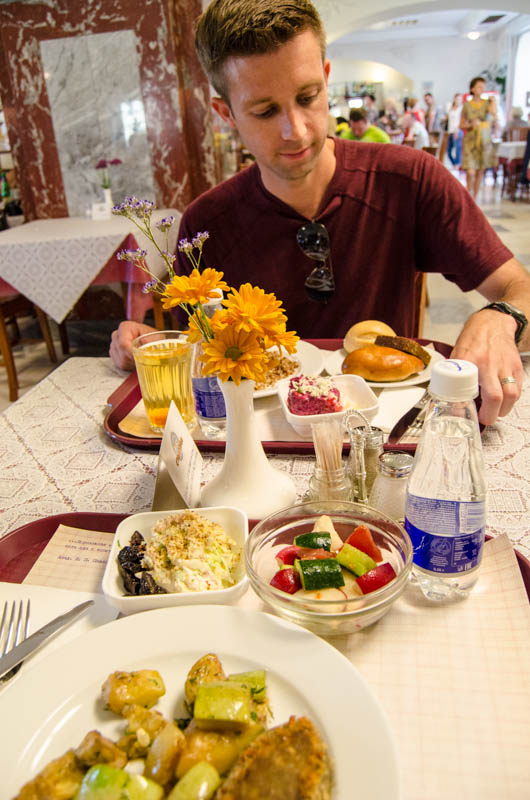 Chris took a shine to kvass, a fermented beverage made of rye bread and very popular among Russians in the summertime. I preferred to try Russia’s sparkling wine, formerly known as Soviet Champagne. And it wasn’t uncommon to see Russians at tables next to us with decanters of vodka. Sadly, the one thing that we didn’t get to try (outside of garnishes on our meals) was the famous Russian caviar. We’ll add that to the “Next Time, Bigger Budget” list. 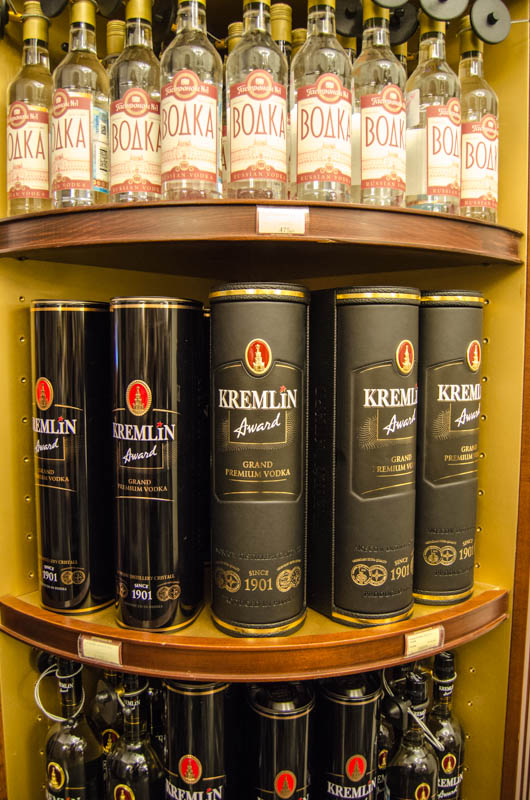 We also visited a Georgian restaurant one evening. Much like Mexican food in the U.S., Russians love Georgian food; it’s the more flavorful cuisine of a southern neighbor. And with shish kabobs, khachapuri (warm, gooey cheese-stuffed bread), and salads of local cheese and tomatoes, I can definitely see why. We finished our night with drinks at Noor Cocktail Bar, where we made friends with the boisterous head bartender, Marat. 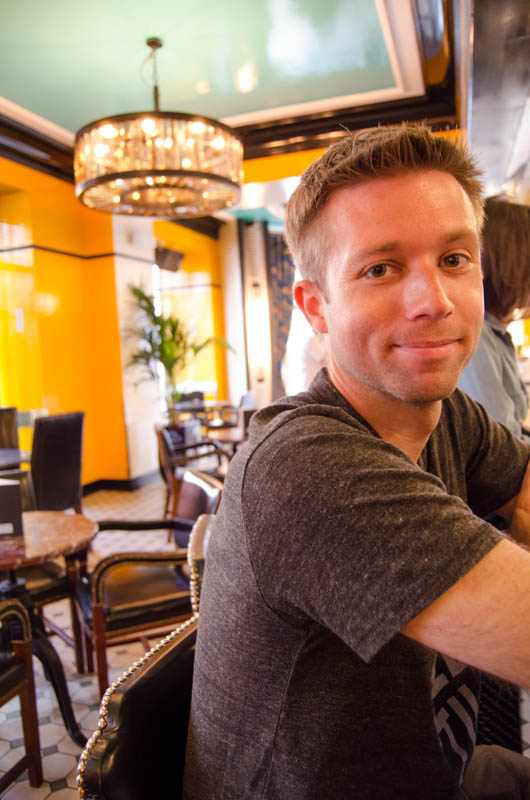 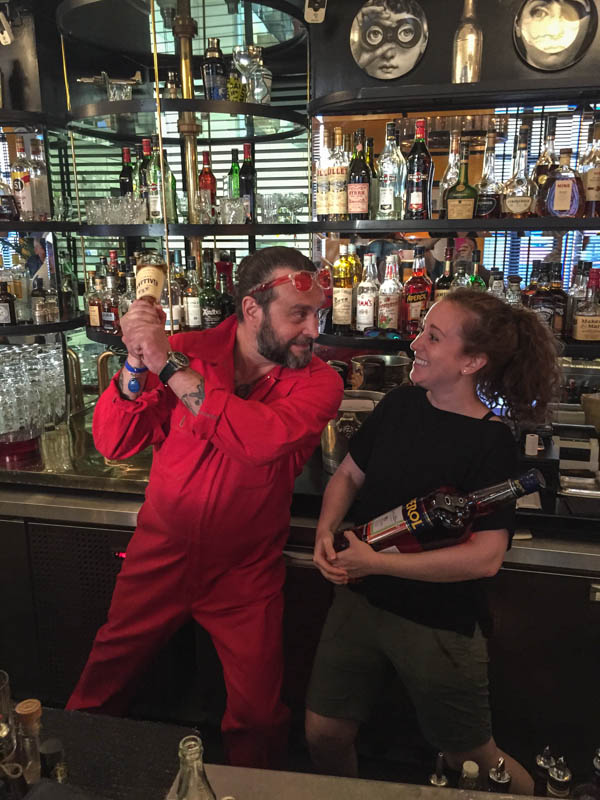 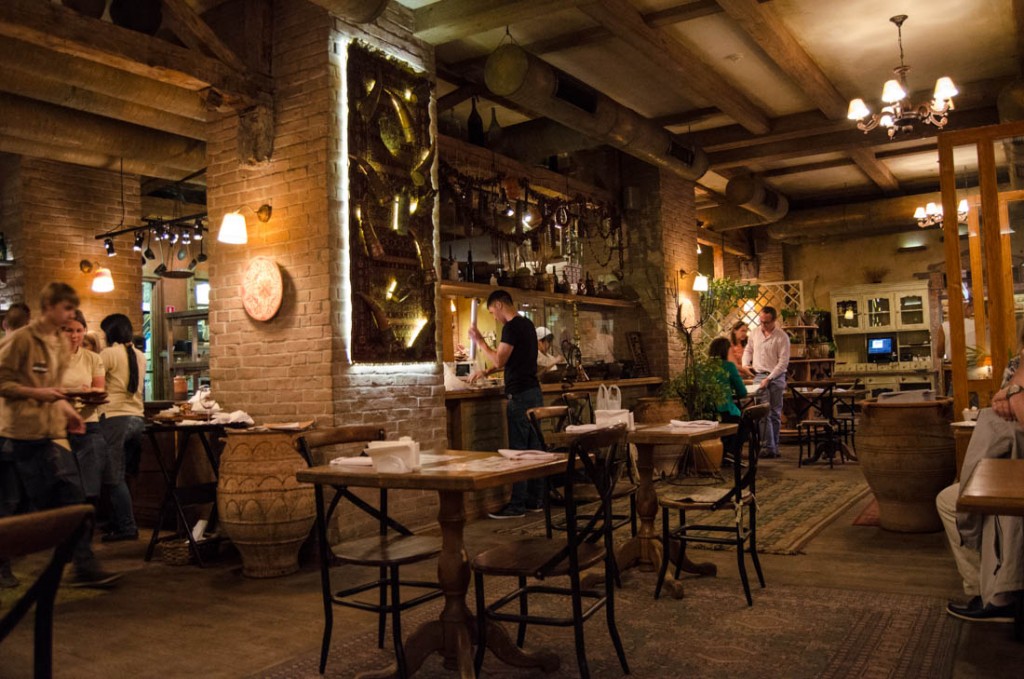 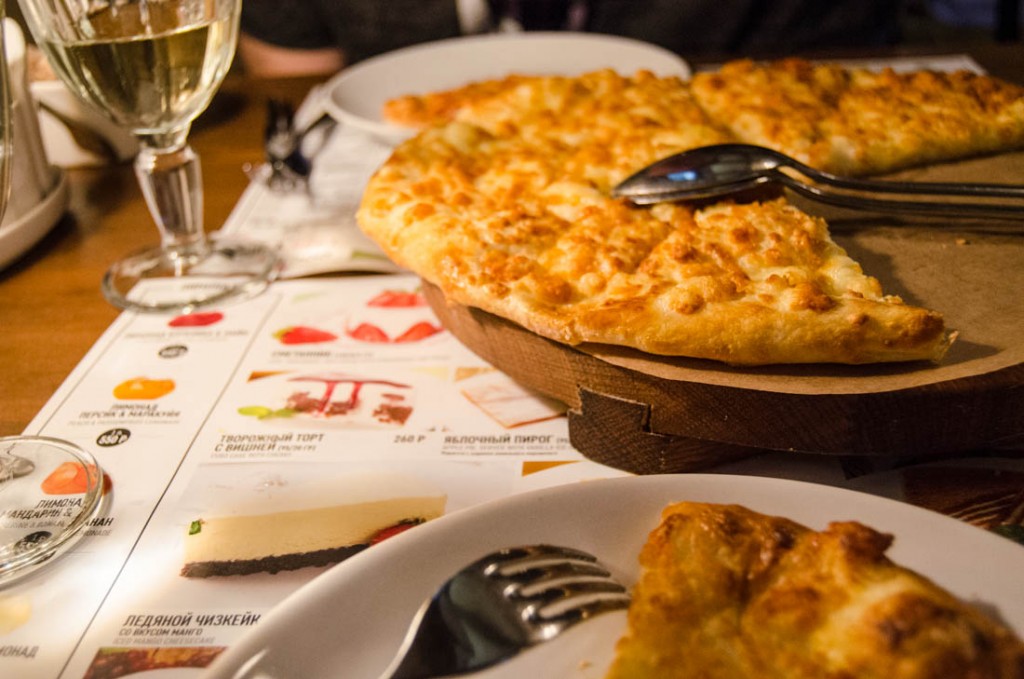 With only two full days, we were able to visit Red Square and the Kremlin, ride around the city’s magnificent metro, and stroll the streets and sample the cuisine. I consider this a fantastic achievement considering half the time we had no idea where we were going. Russian is based on the Cyrillic alphabet, which is a big departure from the Latin-based script we’re used to. Also, very few signs are in English. We had a very hard time figuring out street names, which of the many (and very spread out) exits to take in the metro, or even where the convenience stores were to buy a bottle of water. I mean, would you recognize even these universally-known companies without their logos? 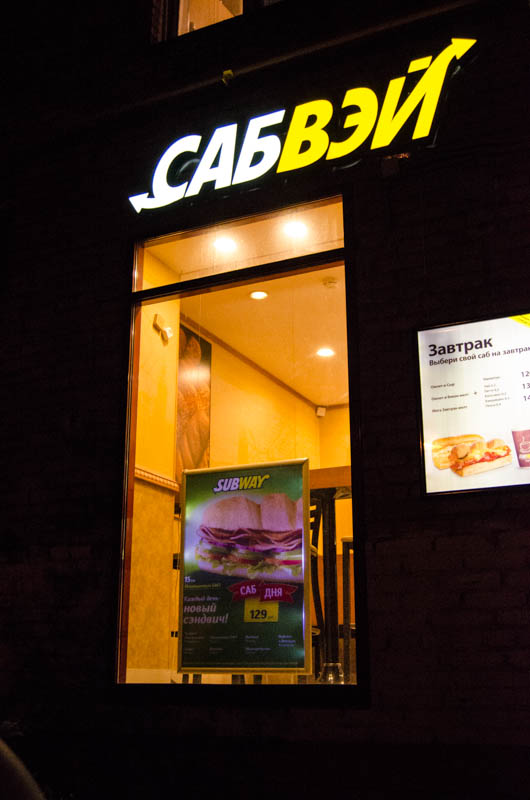 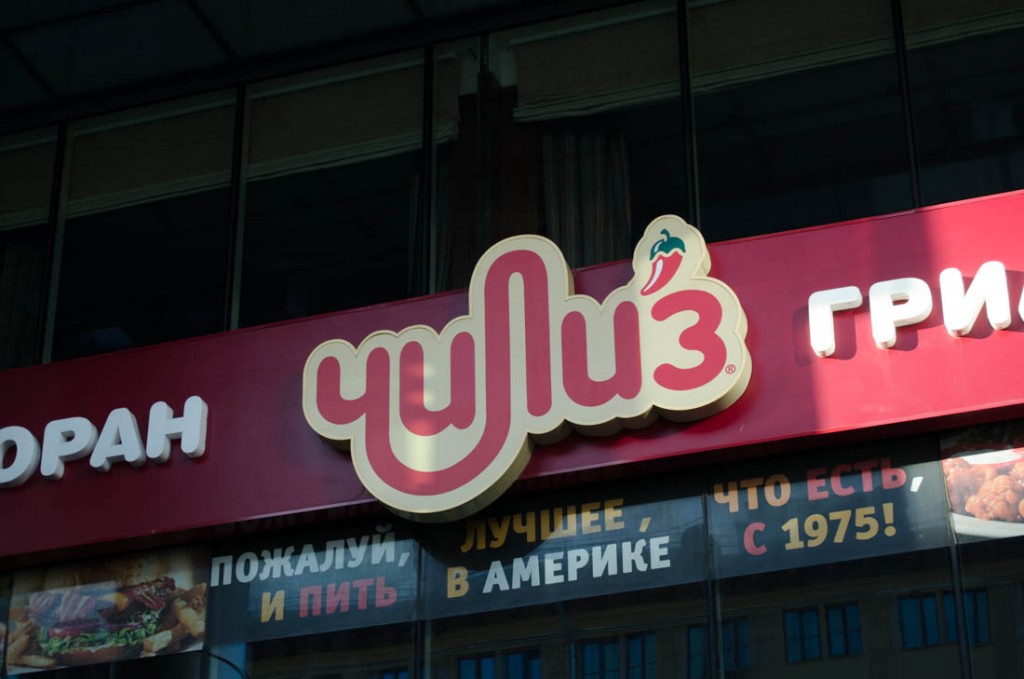 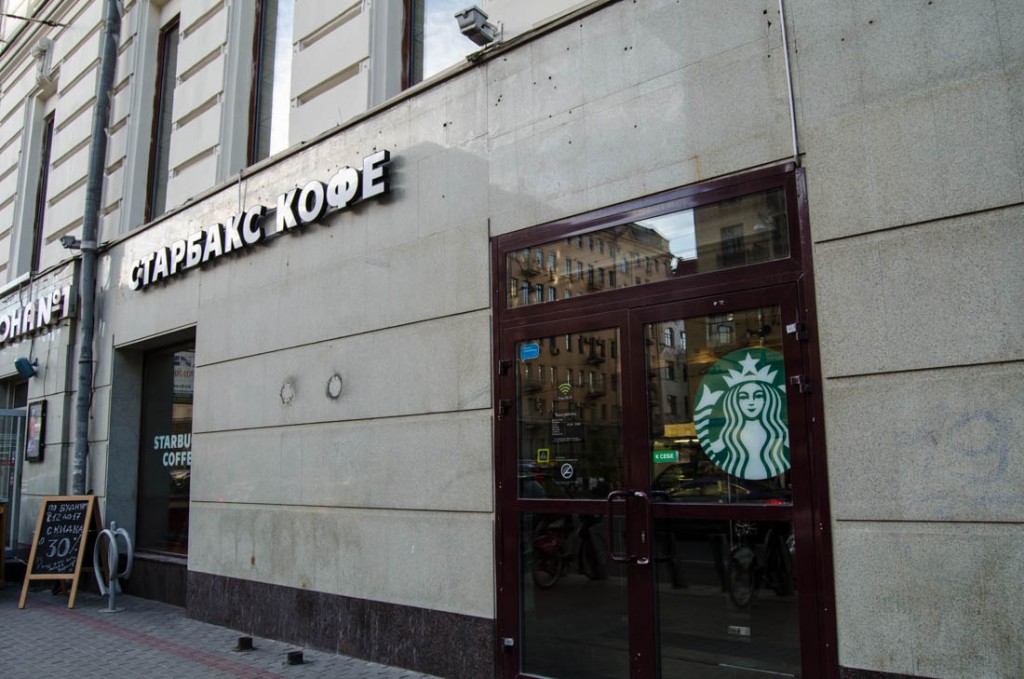 Well, that’s it for Moscow! We had an equally beautiful time in St. Petersburg, which I’ll fill you in on next. Do svidaniya!