We chose Tokyo as the first stop on our trip for a number of reasons. It’s a great portal for our next destinations in Asia. We found a killer deal on our flight over here. We love sushi. Transportation is super efficient, the streets are immaculate, crime is almost nonexistent, and you can drink the water without problems. Even though Japan can be quite difficult for foreigners in a lot of ways (there is a host of rules and customs to abide by, few people speak English), we saw this first stop as more of a vacation as we transition into life on the road. Thinking of it as a vacation also helped as we overcame initial sticker shock for how much things cost here, though things are definitely better than they were. In general, I think things are expensive for a reason… usually the quality of the things you are paying for is worth it.

Case in point: the JR Rail Pass. Two seven-day rail passes cost us $487-an initially shocking sum for this newly-found nomad. However, over time, we came to see the great value in the passes. First off, two round trip tickets from Tokyo to Kyoto would cost around $450 alone. Not only do we have to make this journey, but we also found ourselves using the passes to get around the city every day. Also, these trains are incredibly fast, super comfortable, and always exactly on time (except our second night in Tokyo, when this happened and trains were shut down to make sure there were no damages. Yeah.)

The number one thing we wanted to do while in Tokyo was visit the Tsujiki Market and get the freshest sushi in the world. Before leaving for our trip, I had grand plans of us sleeping soundly on our flight, arriving at our hotel in the late evening, and then staying out all night exploring the city until it was time to line up to get a place at the Tsujiki Market around 3am. Well, that didn’t happen. We didn’t sleep at all on the flight—perhaps it was the excitement from the baller surroundings or the fact that it spanned from 12pm-1am Chicago time—and quickly wuss-ed out on our all-night plans. We were asleep within minutes of checking into our hotel and opted for the pricier taxi ride early the next morning.

Tsukiji Market is the largest wholesale market for seafood in the world. Die-hard tourists awake at the crack of dawn to fight for one of 120 spots to see the live tuna auctions, which have existed for generations and usually fetch north of $10,000 per fish. The auctions don’t start until after 5am, but guidebooks recommend arriving around 4am to secure your place. We arrived at 3:30am to be safe and were shocked to find the spots (signified by a colored vest) already 75% full! All the vests were snatched up by 3:45am and we had to watch the poor souls that arrived right after be turned away after also waking up at this crazy hour.

When we were finally called for our tour, we were taken through the bustling market to see the auction already in progress: sellers had laid out their daily catches in rows and buyers were scrutinizing each frozen fish by poking at it with their tools and using flashlights to examine the meat. The auctioneer soon hopped onto a box and began seeking the highest bidder (or that’s at least what I assume happened since I couldn’t understand any of it). Once it was done, the frozen tuna were dragged away, butchered, and sent to sushi restaurants around the world.

No trip to Tsukiji Market would be complete without sampling some sushi. Since it was the morning of my birthday, we decided to celebrate with going to one of the most popular sushi hole-in-the-walls in the market, Sushi Daiwa. The wait was about an hour, but once we made it into the tiny restaurant, and somehow found ourselves ordering a bottle of Sapporo at eight o’clock in the morning, we were happy as clams—or should I say “aoyagis.”

We walked over to the beautiful Hama-rikyu garden, which was built by 17th-century shoguns for their private enjoyment and now is a lovely oasis from the bustling city, complete with a lovely teahouse in the center. 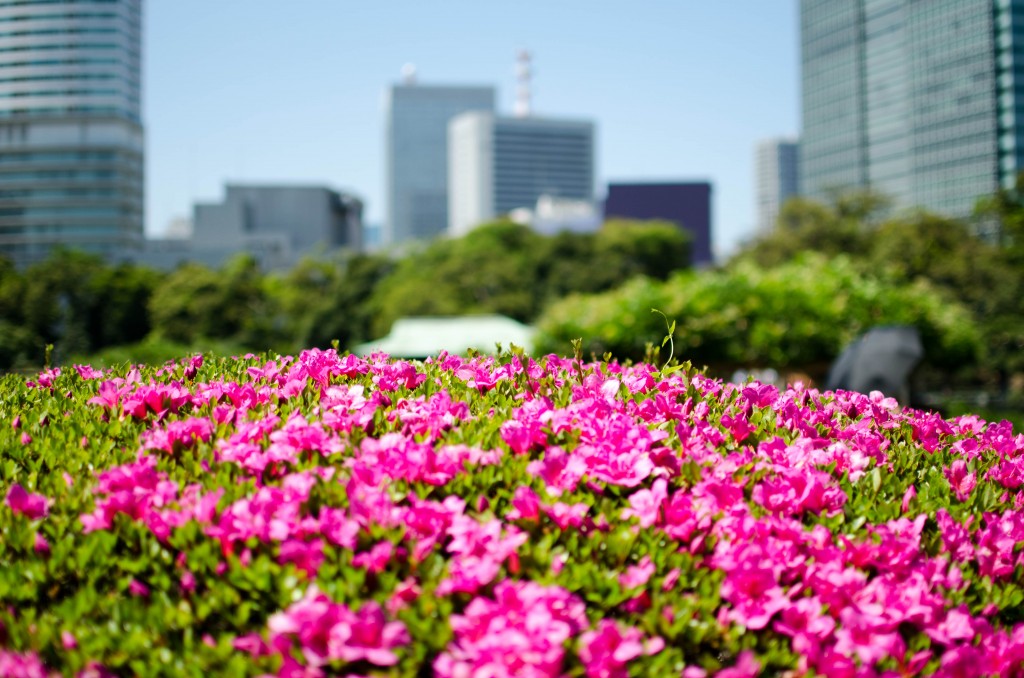 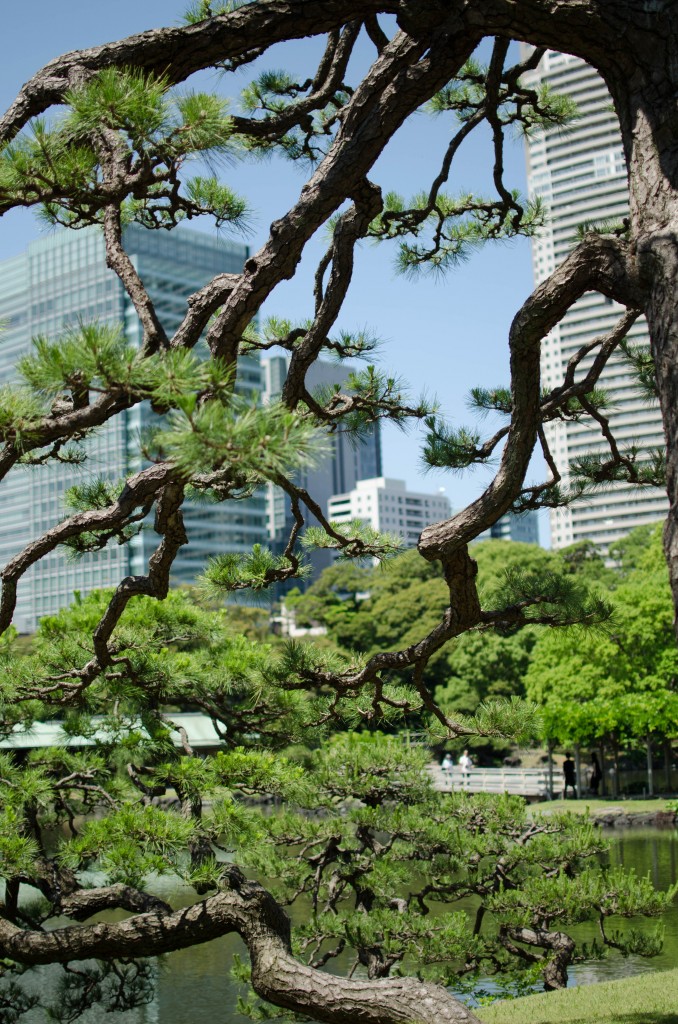 Next, we hopped over to Tokyo’s high-fashion district, Ginza. This reminded me of a larger version of Chicago’s Magnificent Mile, complete with major department stores (we checked out the luxurious kimono department and beautiful food vendors at Mitsukoshi) and even a 12-story Uniqlo (where upon which I made sure to pay my respects to each and every floor). 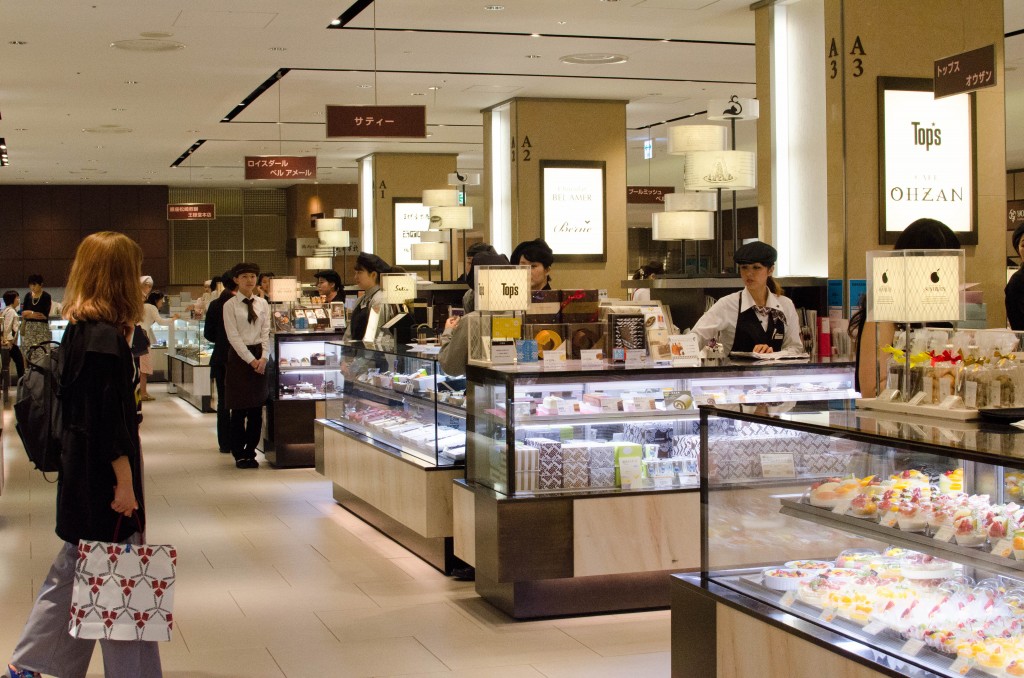 After Ginza, we visited Tokyo’s Asakusa district, which is part of its downtown area and home to its most famous Buddhist temple Sensoji. Chris and I put a ¥100 (<$1) coin in the offering area, shook a metal box until a stick with kanji characters came out, and then matched those characters to the a drawer that contained our fortune. There is even a line for those that received a bad fortune to tie it up and try again for better luck. At the temple, we were approached by a group of Japanese students looking to practice their English. After a bit of skepticism, which we later came to fully regret, we found ourselves with the perfect tour guides and models of the amazing Japanese work ethic. These students were studying to be doctors, lawyers, and biologists, and they spent two Saturdays a month speaking with tourists to try to improve their English skills. Amazing.

With only about 6 hours of sleep in a 36-hour period, we decided to head back to the area where our hotel was (a nice budget accommodation called Kimi Ryokan) in the Ikebukuro neighborhood.

On our second full day in Tokyo, we took the train to the Harajuku neighborhood, which houses one of Japan’s most popular shrines: Meiji Shrine. The shrine commemorates Emperor Meiji (or Meiji the Great) and the Empress Shoken. Meiji ruled from 1867 to 1912 and presided over Japan’s transition from a feudal state to a capitalist and imperial world power. We visited the shrine’s forested grounds on a Sunday and were treated with the sight of many well-dressed Japanese families bringing new babies to its grounds for good fortune and even a traditional Shinto wedding.

Once you leave the shrine area and its well-dressed visitors, however, the rest of Harajuku is chock full of trendy Japanese kids. “Cutesy” is definitely the theme here. We walked down the narrow Takeshita Street and got Japanese-style crepes. The wide street of Omesando is often referred to as the Champs-Elysees of Tokyo. We also stopped by the beautiful Aoyama Flower Market Teahouse to admire the ladies taking Sunday tea amid beautiful flowers for sale. 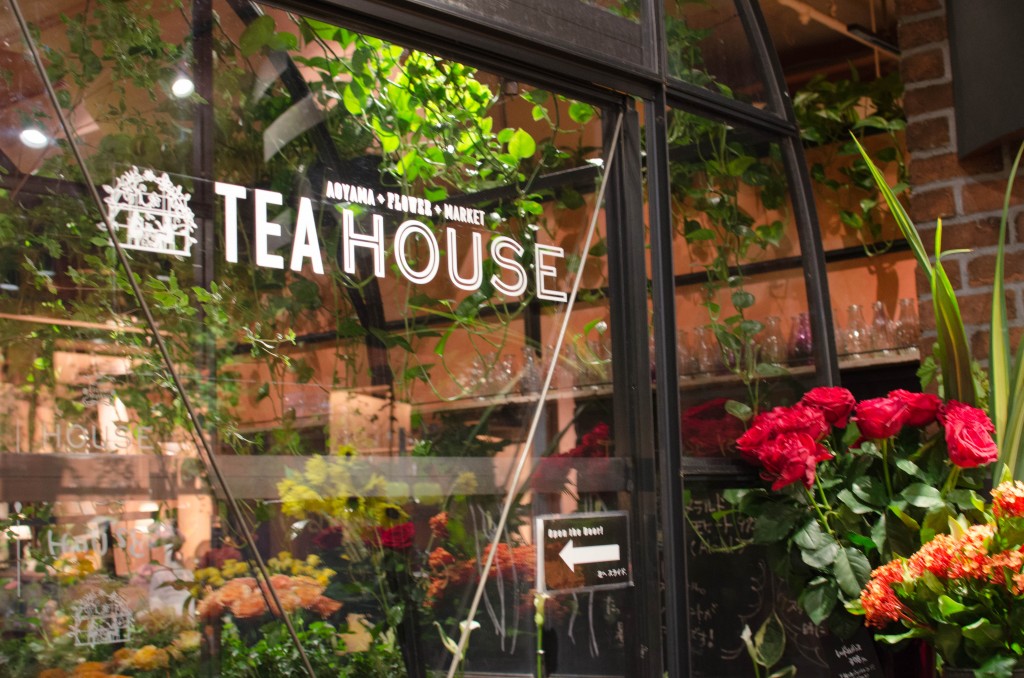 Next, we headed over to another shopping area called Shibuya. Shibuya’s iconic crossing is often shown in movies like Lost in Translation depicting Tokyo. We got to experience firsthand the scramble crossing, which stops cars in all directions to allow pedestrians to cross all which ways throughout the entire intersection. Then, we went to a Starbucks overlooking the crossing to watch the chaos from a bird’s eye view.

Another famous Shibuya landmark is the Shibuya 109 building, a mega shopping silo, that gave birth to the kogal subculture (Japanese schoolgirl) in the 1990s.

Next, we hightailed it over to the Shinjuku neighborhood. Arriving through Shinjuku Station, we learned that Guinness World Records recognizes it as the busiest railway station in the world; it hosts more than 3.8 million passengers each day. Shinjuku is also home to some lovely gardens that blend the Japanese, English, and formal French styles.

Our final stop for the day was over to Roppongi, an area known for its nightlife and upscale commercial district Roppongi Hills. However, with “upscale” usually not being in our RTW travel budget, we did a quick lap and headed back to Ikebukuro for dinner and a fantastic bowl of spicy noodles for under $10 each. Well, that was the quick version of the story. The long version of the story entailed Chris and I staring at the ramen ticket vending machine for several long minutes (as the line grew longer behind us) wondering what each button meant and what on earth we’d end up with if we just starting pushing things. Luckily a nice women soon came over to assist (a common theme for our trip here in Japan: we often look very confused, and some extremely nice local comes along offering help).

All in all, it was a fantastic first two full days in Tokyo. I only wore my Fitbit during the second day, but on that day we logged over 10 miles and 25,000 steps. The next leg of our journey is Kyoto, where we’ll spend three nights. All aboard the shinkansen (bullet train)!