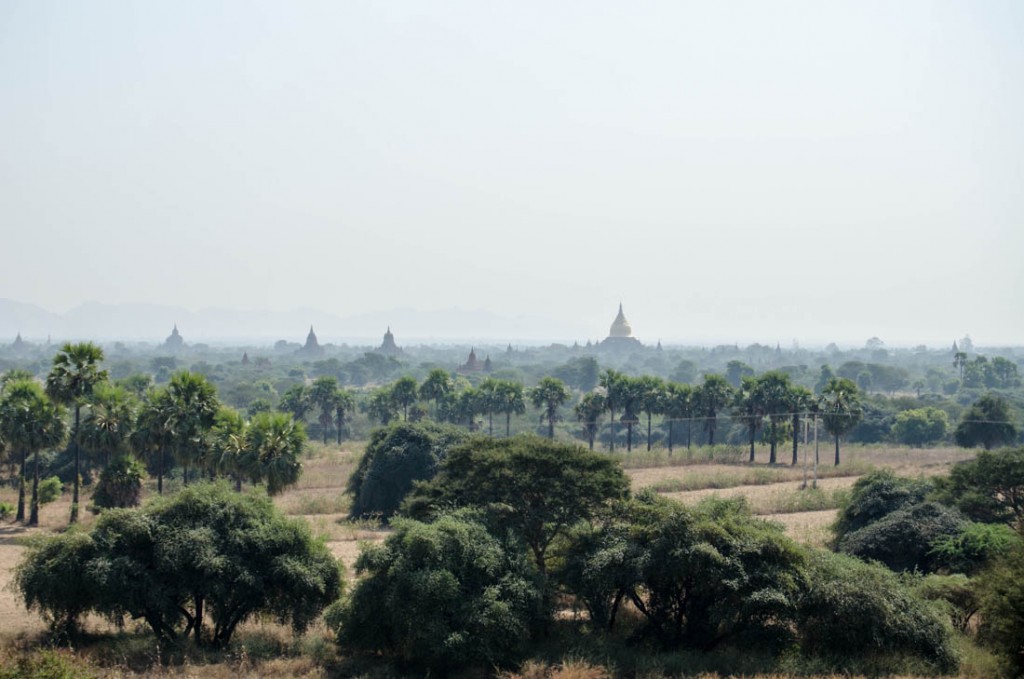 Burma has yet to develop sufficient infrastructure to deal with the large-scale tourism that will surely come. Case in point: our flight from Yangon to Bagan. We weren’t willing to devote a full day on a bus or train, so we decided to splurge for a flight. The cheapest we could find cost $230 per person to go only 300 miles. Our airline and departure city was designated by a sticker we were made to wear. We found out after we boarded, that it was actually three shorter flights since the plane would make two more stops before arriving at our destination. And when we arrived, there was no baggage claim carousel. Instead, a worker unloaded the bags from a cart and actually walked ours directly out to our car. The up side of air travel in Burma, though, is that it is still treated as a luxury. A line of gate agents with big umbrellas protected us from the sun as we waiting to board the plane, and the stewardess on board greeted us with towels and offered us a meal even though it was only a very short-haul flight.

Our guesthouse was similarly rustic, but the overwhelming hospitality of the family that ran it more than made up for its minimal decor and temperamental hot water tank. They were a wealth of information about the best temple-viewing routes and local restaurants. We had a fantastic breakfast each morning on the rooftop patio with a range of Western and Asian breakfast options, which were always served with a heaping plate of fruit, fresh juice, and a special dish of the day like coconut bao or tea leaf salad (a Myanmar specialty that I haven’t seen anywhere else in the world). We were offered tea and a snack every time we came in, and the owner even called our airline to make sure our flight was on time. Our guesthouse was also responsible for outfitting us with what would be our favorite part of our Burma visit: our ebike.

But first a word on why we were in Bagan in the first place. This city was the capital of an ancient kingdom that reached its height between the 11th and 13th centuries. During this time, and to showcase the power and wealth of the Kingdom of Pagan, over 10,000 Buddhist temples were constructed in the city alone. Over 2,000 of these temples remain today and are scattered throughout the modern-day town. Bagan is often compared to the more famous Angkor Wat in Cambodia. Except the massive complex of Angkor Wat can be thought of like a huge feast set before you on the table, while Bagan is more like Spanish Tapas and experienced in smaller, more spread out portions. There are also significantly fewer people at the table in Bagan compared to Angkor Wat, it bears mentioning.

Since the temples are sprinkled throughout the countryside, you need to find a way to get yourself between them. Most people we saw were on an organized tour and were shuttled in between the major temples in large buses. Independent travelers got to choose between a number of options: hiring a private car, a horse and buggy, a bicycle, or an ebike. We chose the latter and couldn’t have been happier. Cars were limited to only the paved roads. Horse and buggies were smelly and usually manned by touts. Bicycles were fun for exploring the villages, but demanded incredible effort to see the more far flung temples that were only accessible by sandy paths. Ebikes were the best. These electric scooters could go up to 40km per hour on the main roads and were a godsend on the sandy roads. Our ebike gave us complete freedom to explore Bagan on our own… and it was also super fun. And, of course, Chris had to name them. Our ebike on day one was the Yellow Dart, and (after finding out that the Yellow Dart was still charging and thus unavailable) our ebike on day two was the Ginger Ninja. Oh yeah, and for the two of us it cost 8,000 kyat a day ($6.33).

The Yellow Dart and Ginger Ninja gave us complete freedom to explore the temples of Bagan on our own. Although the most famous ones like the Ananda Temple and Dhammayan Gyi Temple were the biggest and best preserved, we found them overcrowded and full of vendors (but, I’ll have to admit, the touts here were definitely more friendly and less pushy than those we’ve found elsewhere). We much preferred to explore the smaller and more remote temples where we were usually completely alone. Many of the temples had dark staircases inside that led to the top with gorgeous views, and we always made sure to bring our headlamps to be able to find our way.

Sunset is also a big deal in Bagan. A lot of time and effort are spent by tourists to find the perfect place to watch the sun go down and cast a red glow over the tops of the temples along the horizon. We completely avoided the Shwesandaw Pagoda, which is accessibly via the main road and thus overrun by tour groups. Even the “less crowded” spot mentioned by our Lonely Planet guidebook was packed with tourists as we went by. Thankfully, our wonderful guesthouse manager gave us a local scoop on her favorite sunset viewing spot. We pulled up on the ebike right as the sun was setting, dashed up the crumbling steps in the dark (and eerie) interior, and made it to the top to find only two other couples sharing the view. It was perfect.

Our days on the ebike and watching the sunset over the misty, temple-sprinkled plains of Bagan definitely earn a spot near the top of our favorite travel experiences on the trip. There was much that we weren’t able to see during our week in Burma, like visiting the scenic Inle Lake or taking a boat cruise along the Ayeyarwaddy River. We know we’ll be back to Burma at some time in the future, but we couldn’t help but wonder if we’ll still need an ebike when all the sandy paths are paved or how long until a baggage carousel is installed at the airport. For now, we’re thankful for our time of perfect travel balance in Burma.