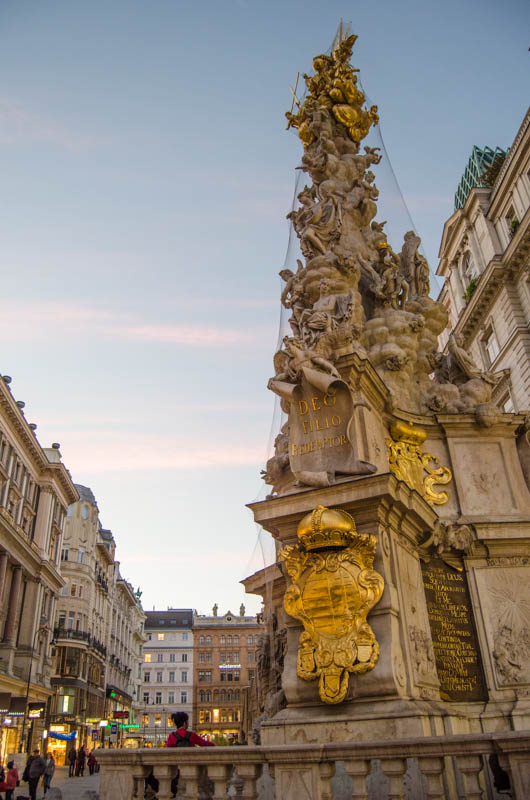 Our next stop was the polar opposite of beer-chugging Munich during Oktoberfest. The stately aristocrat of Europe, Vienna is known for classical music, fancy cake and fine wine, and grandiose buildings. It’s a city where people linger in cafes for hours over a single coffee and pastry and everyone knows how to waltz. It was the home of Johann Strauss (father and son) and where Mozart spent most of his golden years. One of our good friends Dan had given us his sage advice on the top things to do in Vienna, and I was ready to hit all the highlights in our short time there. 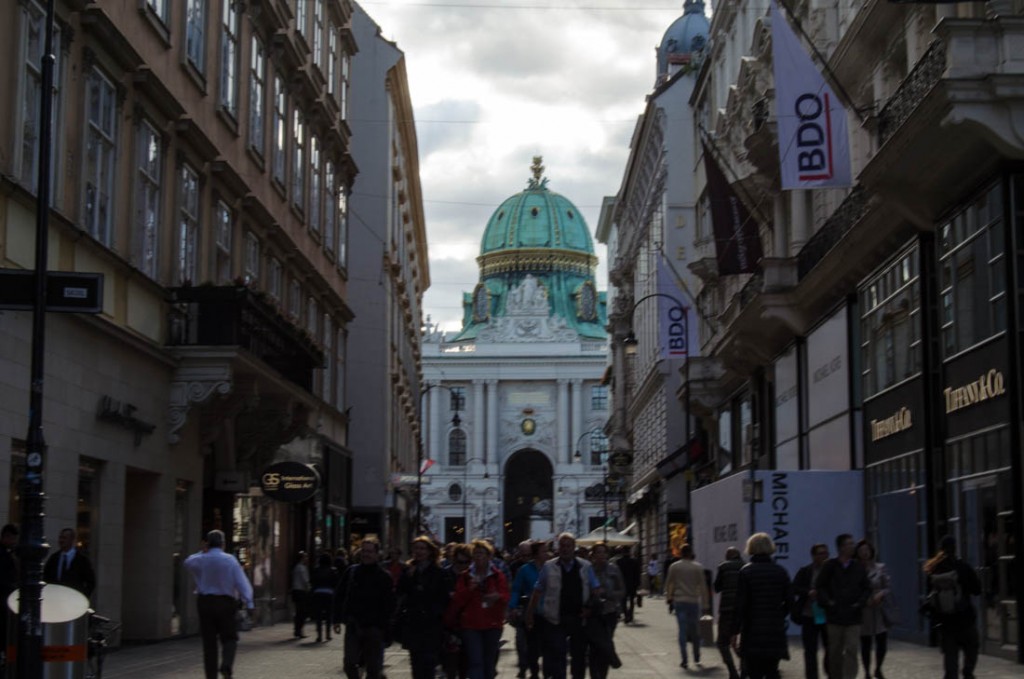 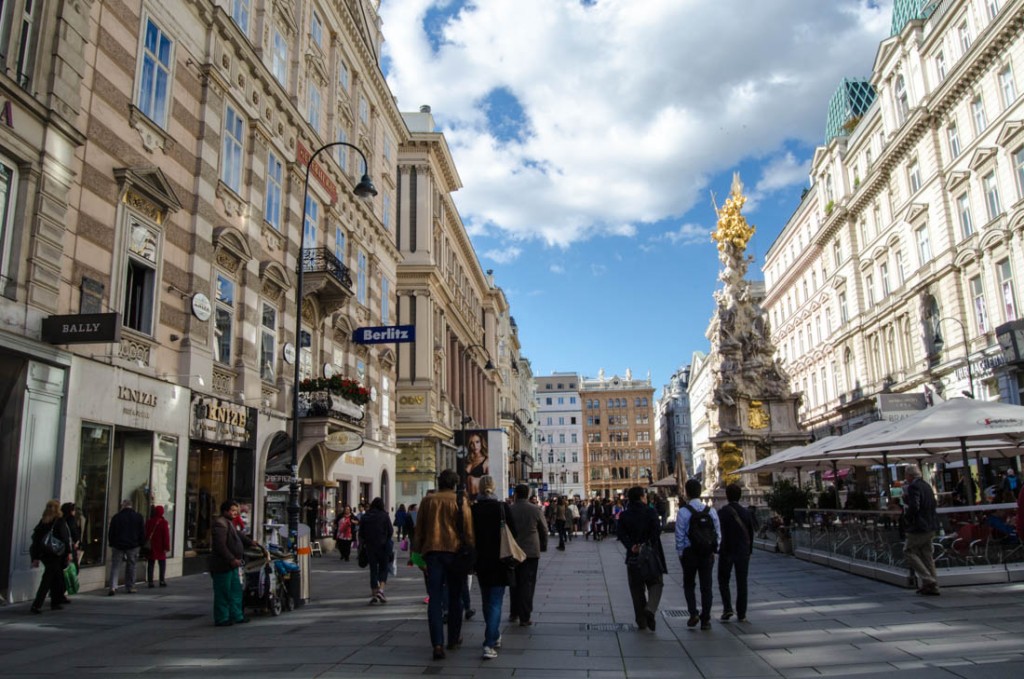 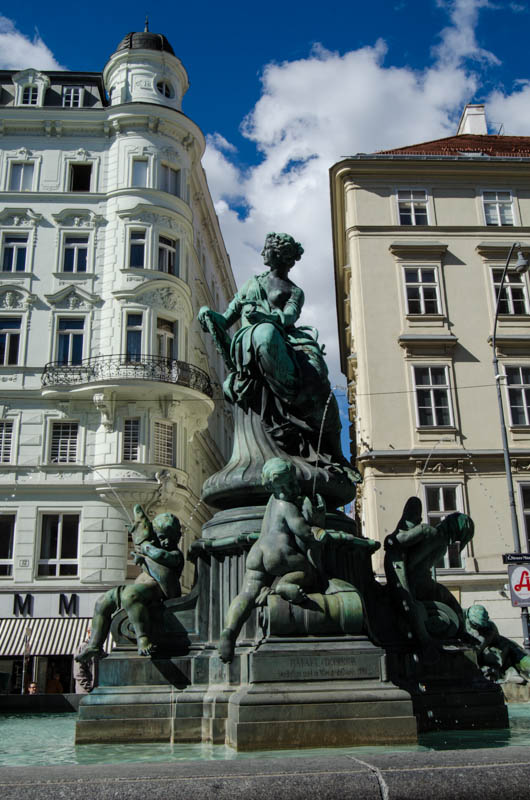 Hapsburg is the word in Vienna. Remember them? The Hapsburg Family ruled much of central Europe for six centuries and occupied the throne of the Holy Roman Empire. Perhaps the greatest imperial dynasty ever, the Hapsburgs enjoyed such a long stretch of power by avoiding war and strategically marrying other mighty families (when they weren’t marrying their relatives, that is).

Vienna today still looks like an imperial capital. The city’s buildings bear the name of the their royal patrons in gold letters, and dozens of statues to famous Hapsburgs dot the city, including the only woman to rule the Empire and arguably the most successful ruler, Maria Theresa. You can tour the imperial apartments of the Hapsburgs’ opulent palaces: Hofburg Palace (the winter residence) and Schönbrunn Palace (the summer residence). 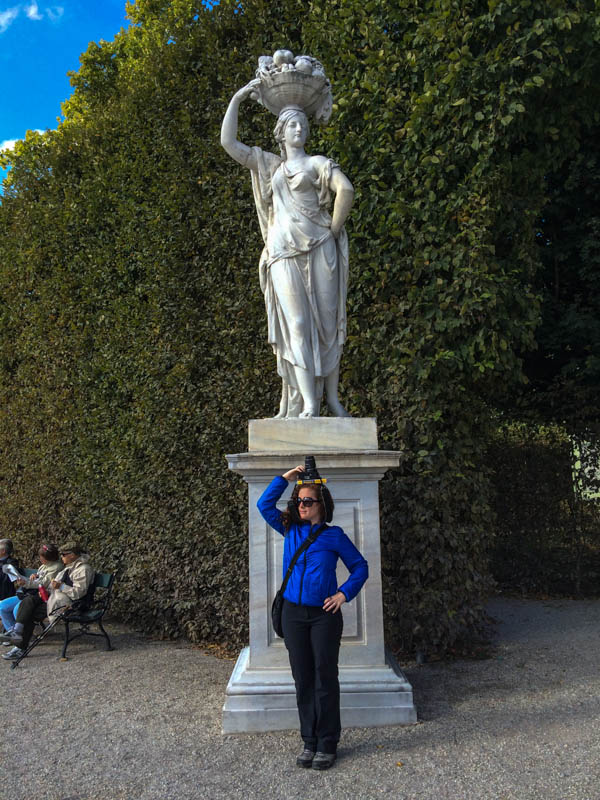 The Imperial Treasury holds the jewels of the Holy Roman Empire. Here, you can see the Imperial Crown of Austria and the Imperial Crown of the Holy Roman Empire and Imperial Regalia, including the emperors’ orb, scepter, and Holy Spear (claimed to have been the lance that pierced Jesus during crucifixion). There’s also the ornate crib of Napoleon’s baby son (called the Cradle of the King of Rome) and the largest emerald I’ve ever seen in my life.

The Kunsthistorisches Museum (say that five times fast… but I’ll stick to calling it by its nickname “Kunst”) houses the art collection of the Hapsburg family that they amassed between 1450 and 1650. The big draw is the Painting Gallery with Italian (Titian, Raphael, and one of my favorites, Caravaggio), Spanish (Velázquez), and French art on one side and Northern European art (with its gorgeous landscapes and captivating details) on the other. Elsewhere in the museum, a myriad of other treasures, including sculptures, jewelry boxes, busts, and even a $60 million gold-plated salt cellar that was stolen in 2003 and found two years later buried in the woods.

Belvedere Palace was home to Prince Eugene of Savoy, the Hapsburg military hero. It rivals Schönbrunn in size and grandeur and today houses a delightful museum. I visited the galleries of the Upper Belvedere Palace and actually preferred them to the stuffier Kunst. It houses some of Gustav Klimt’s best works, French Impressionists, and a handful of some really lovely early 20th century art. Besides vaguely knowing about “the most famous kiss,” I knew little about Klimt’s work before visiting the museum. Klimt was famous for his revolutionary depiction of women in a powerful, dangerous, and seductive light, and he is perhaps Austria’s most famous painter. After all this wonderful art masterfully arranged, the Belvedere’s stunning views of the Vienna skyline were an added bonus.

Coffee and cake is a way of life in Vienna. The most famous cake is the sachertorte, and we had to pay a visit to its birthplace at the cafe in the Sacher Hotel. We had previously been warned that its fame had negatively affected the quality of the cakes and decided to split one among six people just for the experience. The exquisite cakes at Demel, on the other hand, were positively drool-worthy. On the other end of the fancy-ness spectrum, we also had our fair share of wiener schnitzel (a dish that was invented in Vienna, or as the Viennese call their city, “Wien”) and even a massive ham hock. And I had a blast perusing the gorgeous stands at the open-air Naschmarkt. 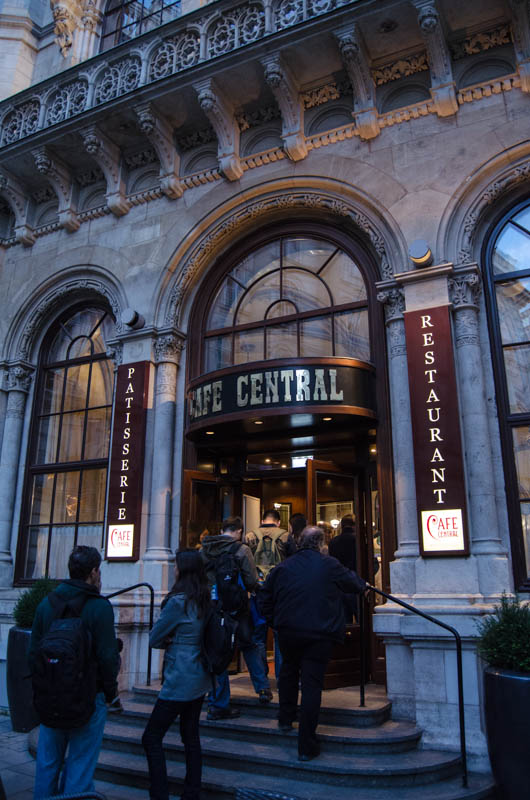 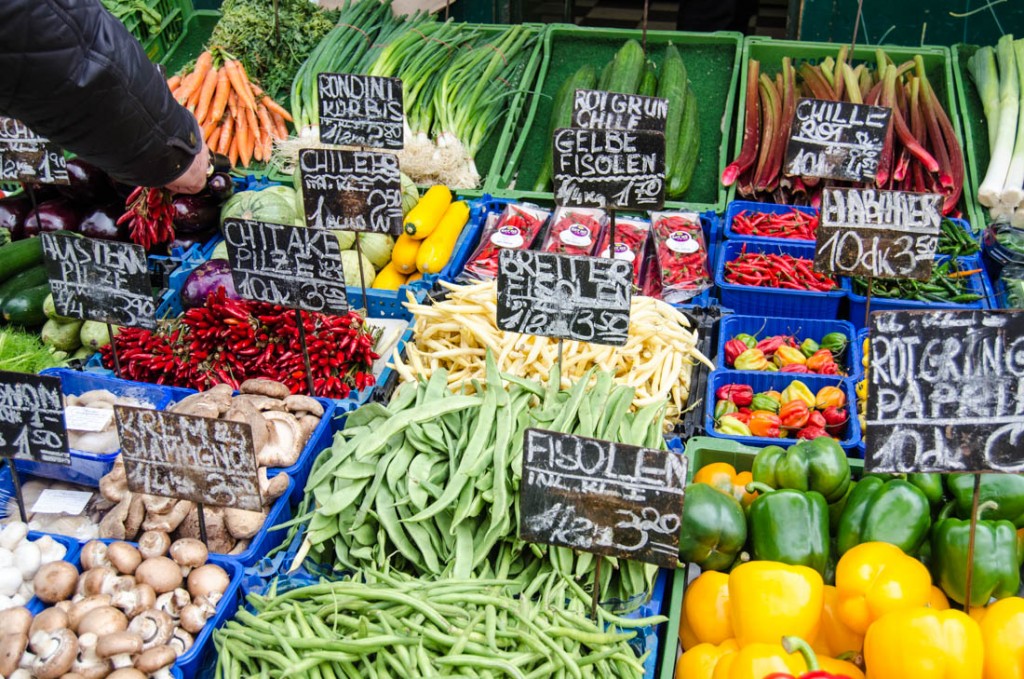 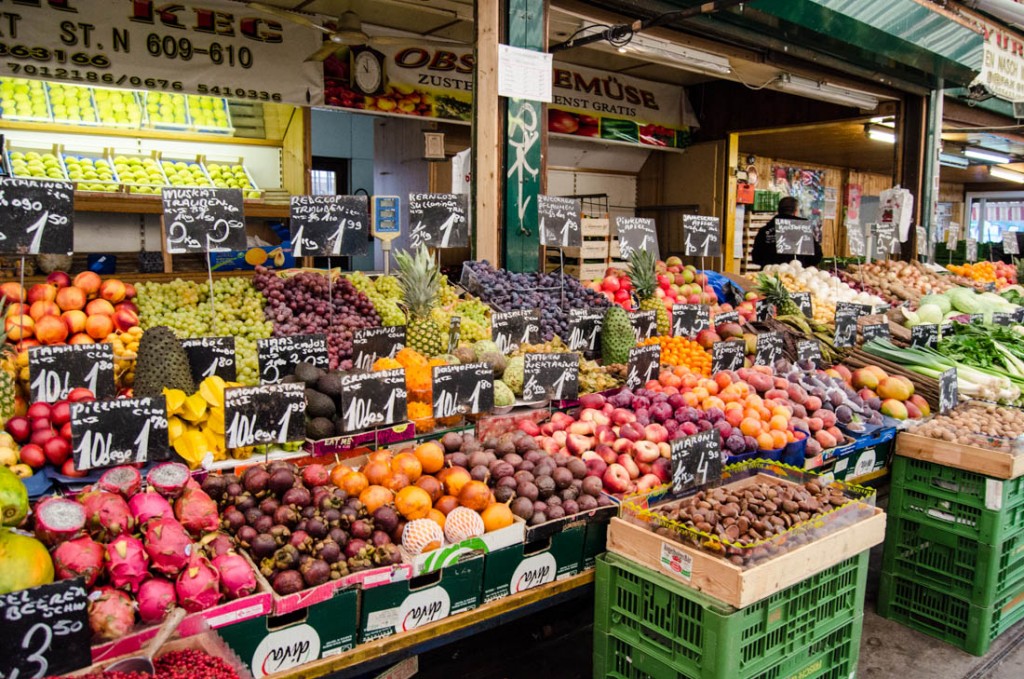 I was solo for one of my favorite dining experiences in Vienna. Zum Schwarzen Kameel (“The Black Camel”) is a super fancy restaurant, but they have a more casual wine bar where you choose from a selection of sandwiches and desserts and share tables with your neighbor while you enjoy with a glass of wine. I selected a few sandwiches that looked yummy and, at my friend’s recommendation, I ordered the chocolate pot, which was pure fleur de sel bliss. A stately Viennese woman that was seated next to me had already helped advise me on how the wine bar process worked, and, returning to my seat from the sandwich counter, I was excited to ask her for some wine recommendations. Looking at the plate I had assembled (curry egg salad and pumpkin seed tartines, a mini goat cheese sandwich, and my chocolate bliss) she frowned and shook her head. Apparently my assembly of flavors was not conducive to proper wine pairings. She called over the waiter, spoke to him in Austrian German while gesturing at my plate, and together they collectively shook their heads and essentially threw up their hands. At my insistence that I try an Austrian wine, they settled on a Welschriesling. It was delicious, and, embarrassment aside, I walked away from the Black Camel happy with my close encounter with the cultured Viennese kind.

Speaking of culture, on our last evening in Vienna, we decided to take advantage of a fantastic deal to see The Barber of Seville at the ornate State Opera (Staatsoper). For the bargain price of 3 euros, you can wait in line about an hour before it starts and get a standing ticket to view the opera along the railings in the back. It’s a phenomenal deal, but after a full day of walking, we only lasted until a little before intermission. Thankfully, we caught the famous “Figaro! Figaro! Figaro!” song, conveniently located at the beginning of the opera. 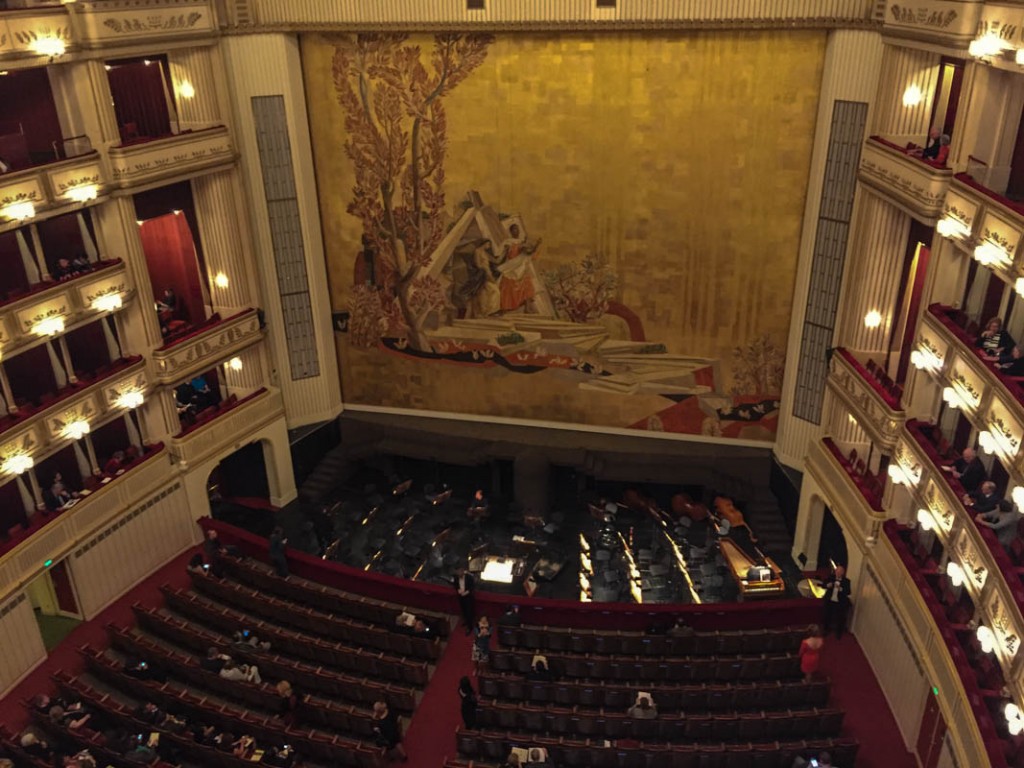