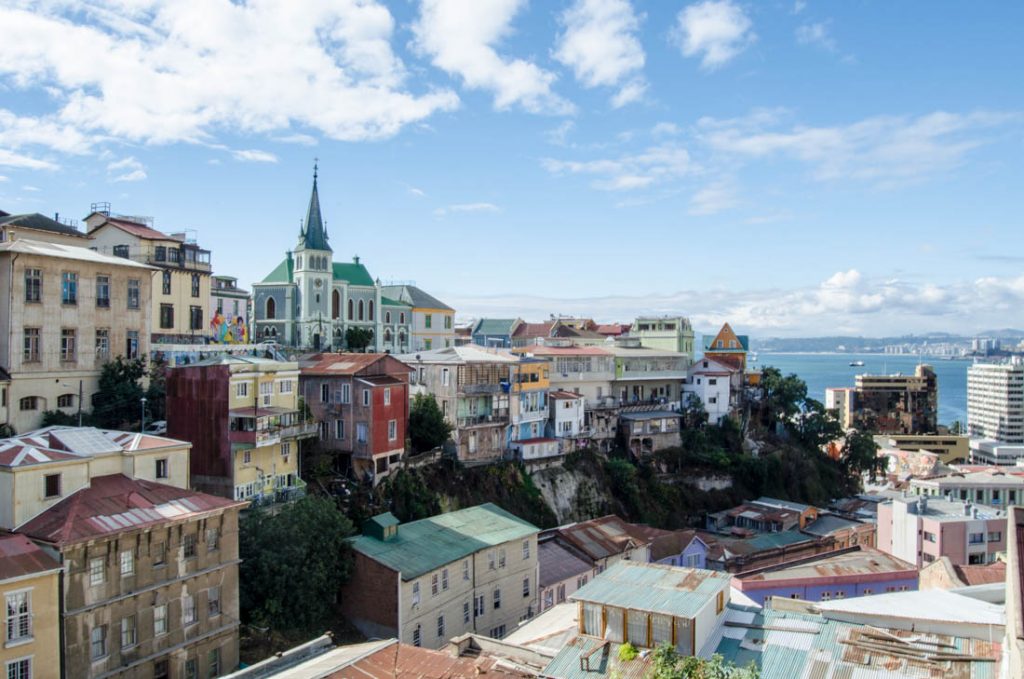 After thoroughly recharging our batteries in Buenos Aires, Chris and I were ready for two weeks of adventure in Chile. We picked up a rental car and my sister Lindsey (who just finished four years of medical school and is now enjoying some much-needed vacation before her residency starts this summer) and her girlfriend Kelly (who is an equally-accomplished, PhD sciencey lady) from the Santiago airport after their overnight flight from the States. What to do when your sister arrives from an overnight flight after just finishing med school? Let her sleep? Shower? No! Go directly to a winery, of course. The white wine region of Casablanca Valley lies directly on the way from Santiago to Valparaiso, where we’d be starting our trip. Casablanca Valley is known for its white wines, and we tried some delicious ones at Emiliana Organic Vineyards.

With the trip already off to a great start, we finished the rest of the drive to Valparaiso and checked into a fantastic two bedroom, two bathroom Airbnb (for the bargain price of $58 per night) overlooking the city. Valparaiso is a gritty, colorful port town that was given World Heritage status by Unesco. It is one of the most unique places we’ve visited on the trip. Houses cling to dozens of steep hills, which most locals traverse using one of the many rattling ascensores (funiculars), and graffitied murals, which the city actively promotes, cover nearly every available surface. We took an excellent free walking tour with Tours 4 Tips that led us through some of the city’s most famous cerros (hills).

Lindsey and Kelly were also good sports when I insisted that we visit one of Pablo Neruda’s homes. Pablo Neruda was a 20th century Chilean poet-politician that would on to receive a Nobel Prize. Although the end of his life was tumultuous (he died just before dictator Pinochet assumed power), Pablo Neruda definitely enjoyed the high life throughout most of his years. He built three whimsical houses throughout Chile: one in Santiago, one in Isla Negra, and one in Valparaiso. They are all museums open to the public today, though photography inside is not allowed.

We enjoyed several great dinners and several pisco sours (although I prefer the Peruvian variety that comes shaken with an egg white) during our four days hiking up and down Valparaiso’s hills. Also, true to my family’s traditions, we spent a lot of time in bars playing cards.

To burn off all the food and drinks we enjoyed together, we decided to do a full-day hike up Cerro La Campana. Charles Darwin did this hike in 1834 (with the help of a horse), and there is a plaque near the top to commemorate his visit. Hiking up this 6,170 feet tall mountain forces you to climb up 4,773 feet in just 4.4 miles. And it really is more of a climb than a hike, especially the last 90 minutes when you are scaling boulders trying to reach the rocky summit. It took us over eight and half hours to climb, enjoy the view, and hike back down on increasingly-shaky legs. However, unlike Machu Picchu Mountain, the effort was truly worth it. At the summit, we could see both the Pacific Ocean and the Andean summit of Aconcagua in Argentina (the highest mountain outside of Asia). Almost as good was the box of empanadas we bought and enjoyed on the drive back to Valparaiso.

With our legs thoroughly sore, we said goodbye to Valparaiso and headed south into Chile’s famous Colchagua Wine Valley. Carménère, here we come!