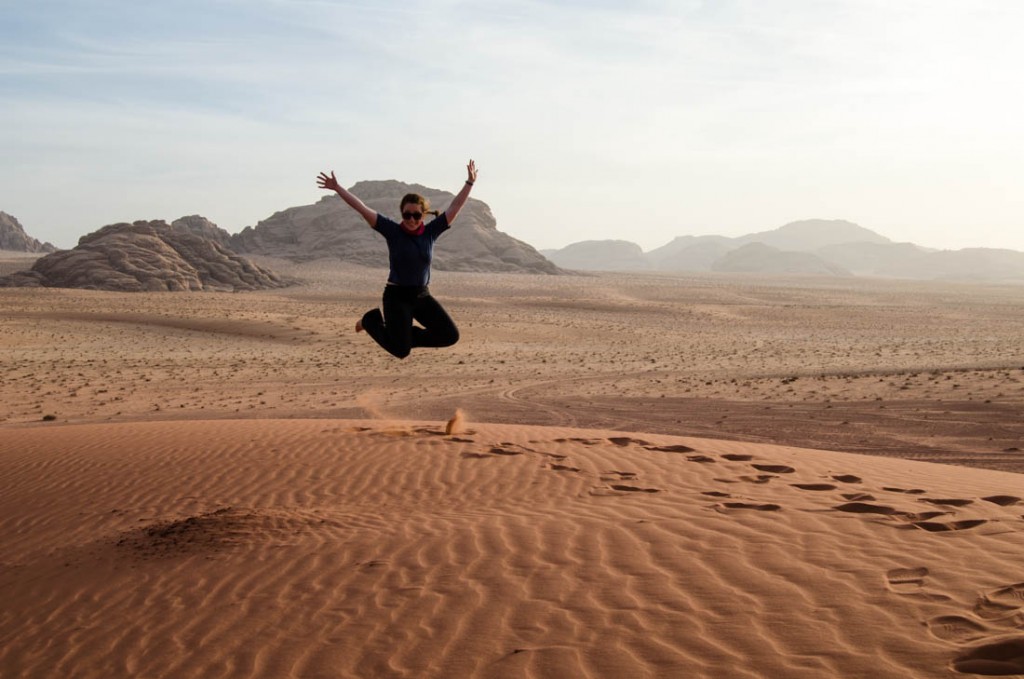 After Petra, we were next looking forward to visiting Wadi Rum, an inhospitable desert made famous as the setting for Lawrence of Arabia (both the real guy, T.E. Lawrence, and also the movie) and, more recently, The Martian. Chris had found a highly-reviewed Bedouin guide company early on, and we planned to spend the full day in the desert before retiring to sleep in the tribe’s secluded camp for the night. Driving from the Visitor’s Center into the village to meet our guide, we were already struck by the unearthly beauty of the place. Sandstone rock formations jut out of red sand, and mountains in the distance form shadowy layers that makes the desert look like a painting. It’s easy to see why this is the number one location of choice for films about Mars. 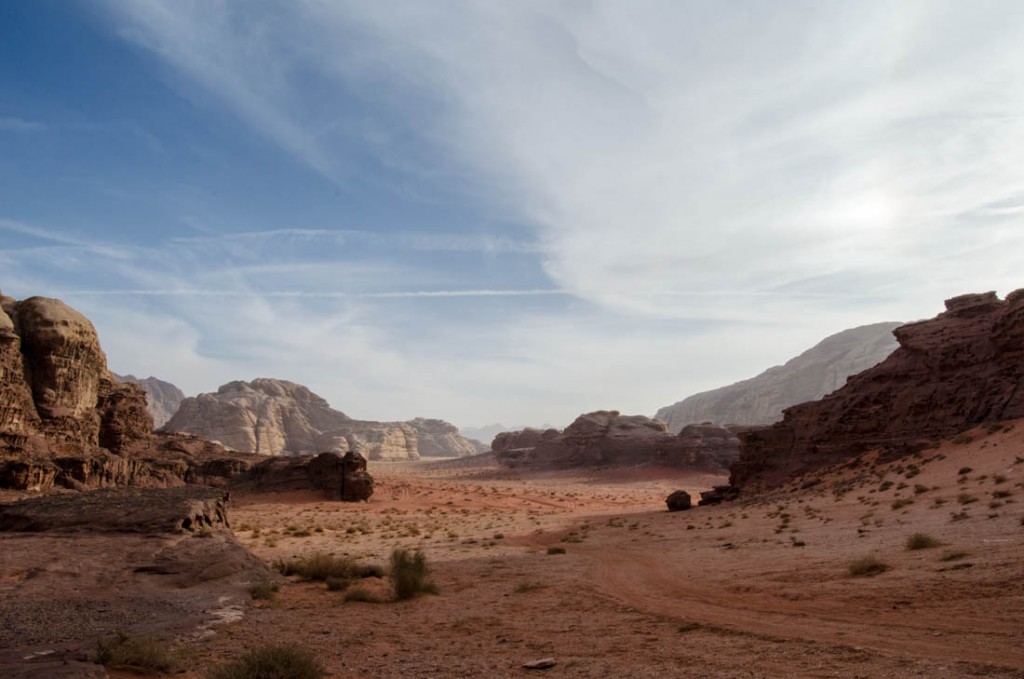 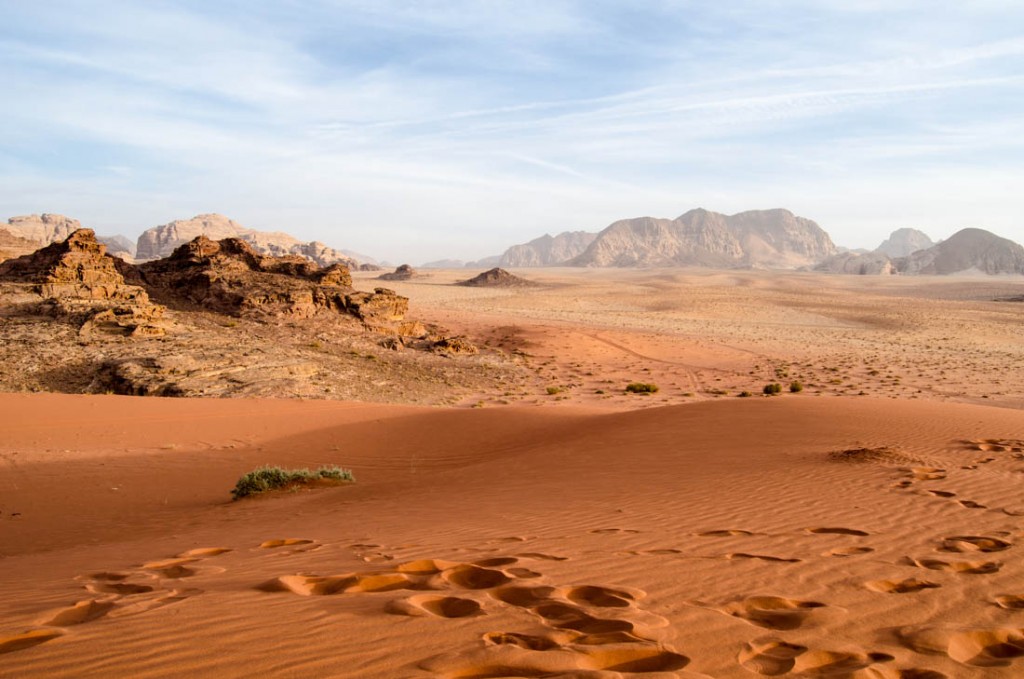 We had tea in the house of the tour owner Mehedi and met one of his family members, Mohammed, who would be our guide for the day. The term Bedouin refers to semi-nomadic desert dwellers, and Mehedi does a great job informing tour participants of the specific history of his tribe and his family. We couldn’t wait to get a glimpse into their way of life during our day in the desert, and we were able to ask Mohammed lots of questions like, “How do you get water out here?” (Through a neat system that collects rainwater from the mountains) to “Where do you get food from?” (The supermarket… duh, Lauren). Chris, Mohammed, and I set off in our trusty steed, an ancient Toyota Land Cruiser. We spent the day zipping across the red sand of the desert, climbing up rocks, running down dunes, and exploring canyons. 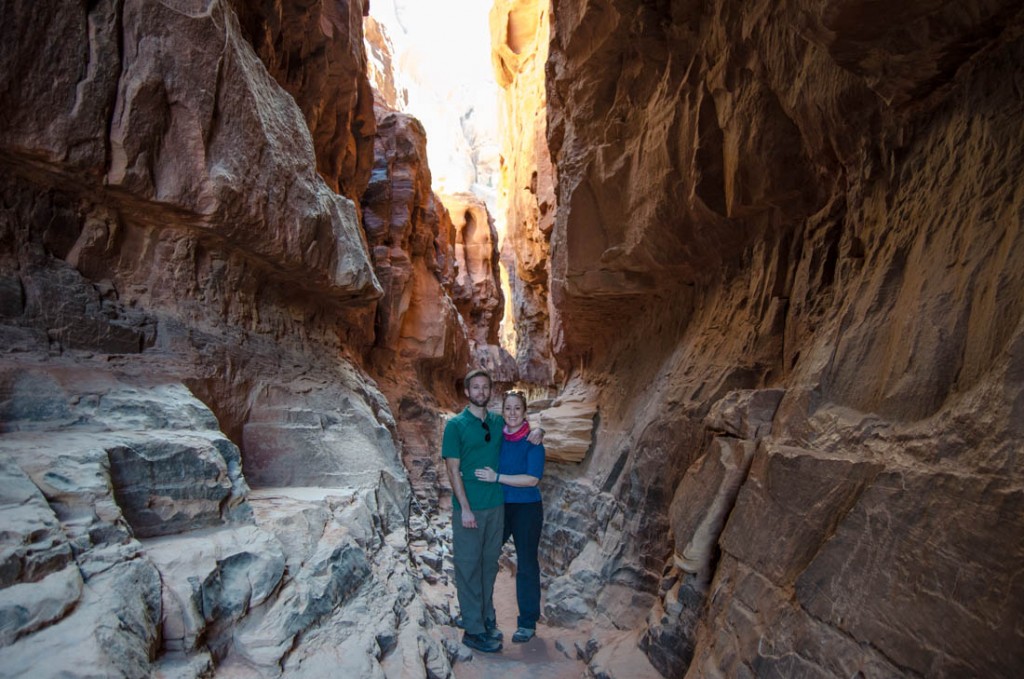 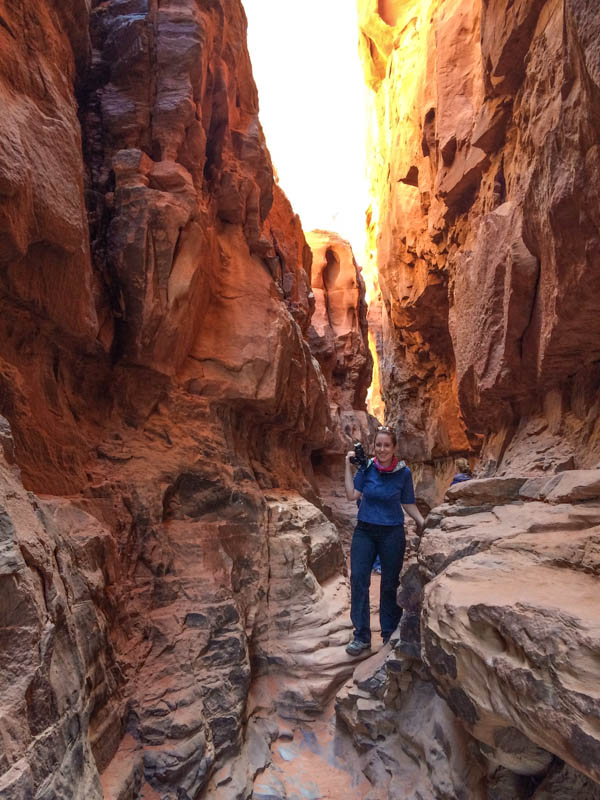 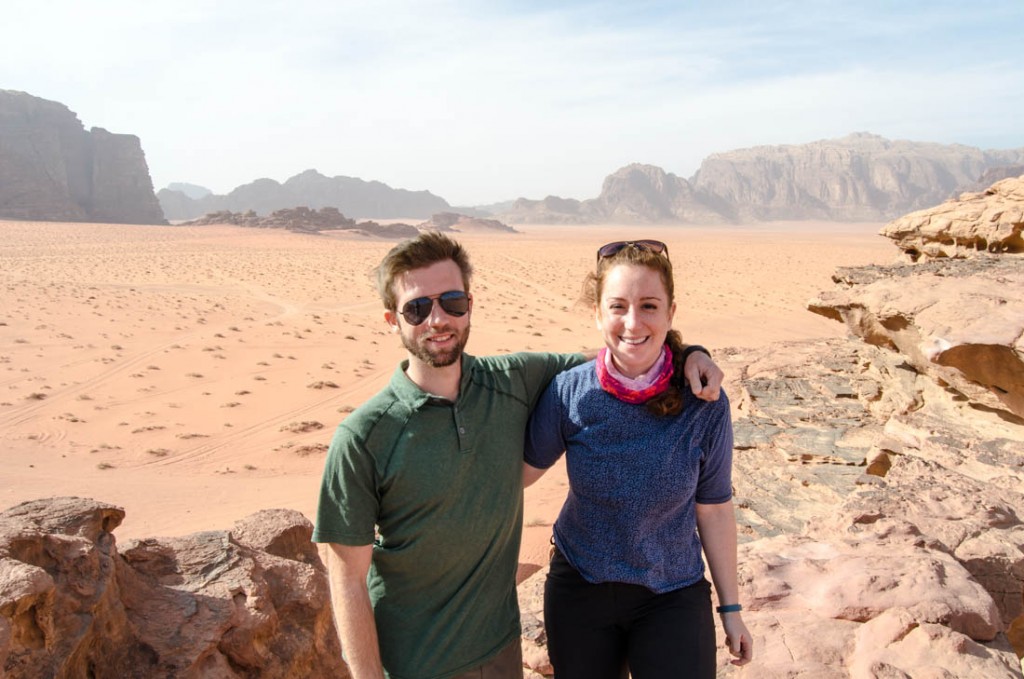 Like Petra, a movie helped Wadi Rum rise to international fame. Lawrence of Arabia is based on the tales of T.E. Lawrence, a Brit who joined forces with the local people led by King Hussein bin Ali against the Ottoman Turks in the effort to form an independent Arab nation in 1917. Wadi Rum was the backdrop for many of Lawrence’s adventures and in the stories he wrote down in Seven Pillars of Wisdom. Although the West has amplified Lawrence’s role in the aftermath (in reality, he was just one of 100,000 fighters for the cause), today, the local Bedouins are happy to continue the Lawrence legend for tourists. We stopped by a few sights bearing his name, including some Nabataean ruins where Lawrence supposedly stayed for awhile.

Nevertheless, there is no doubt that Lawrence himself was a camel-riding derring-do, and he deserves a lot of credit for immortalizing to the Western world the courage and bravery of the local Arab people in and around Wadi Rum. I tried to channel some of his bravery as we raced up dunes and scrambled up boulders during our day in the desert, and especially when we encountered this rock bridge high off the ground. 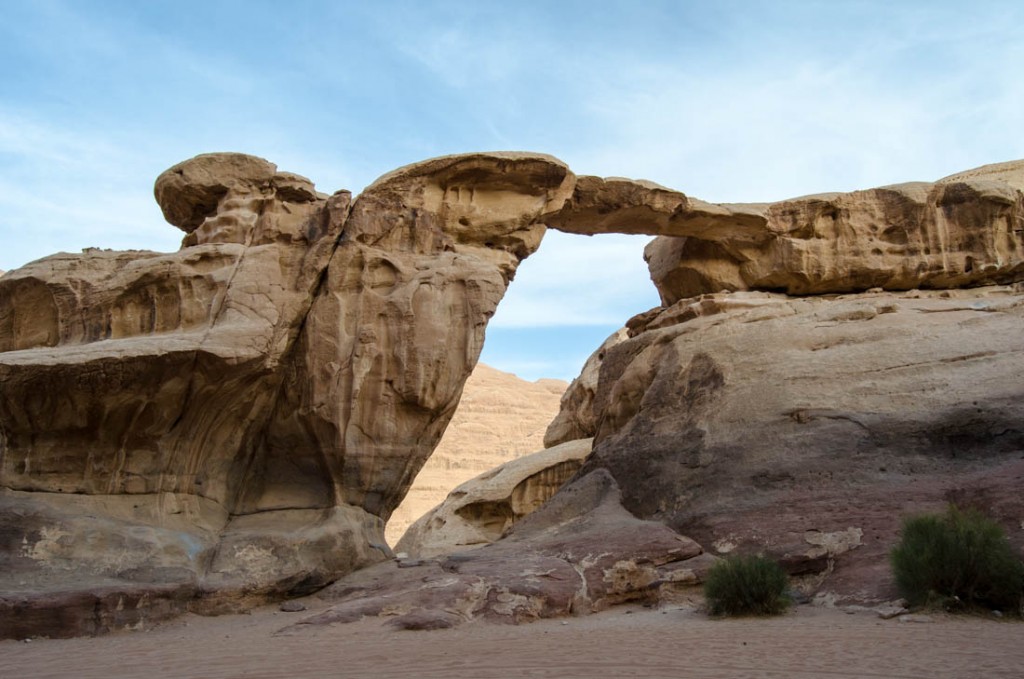 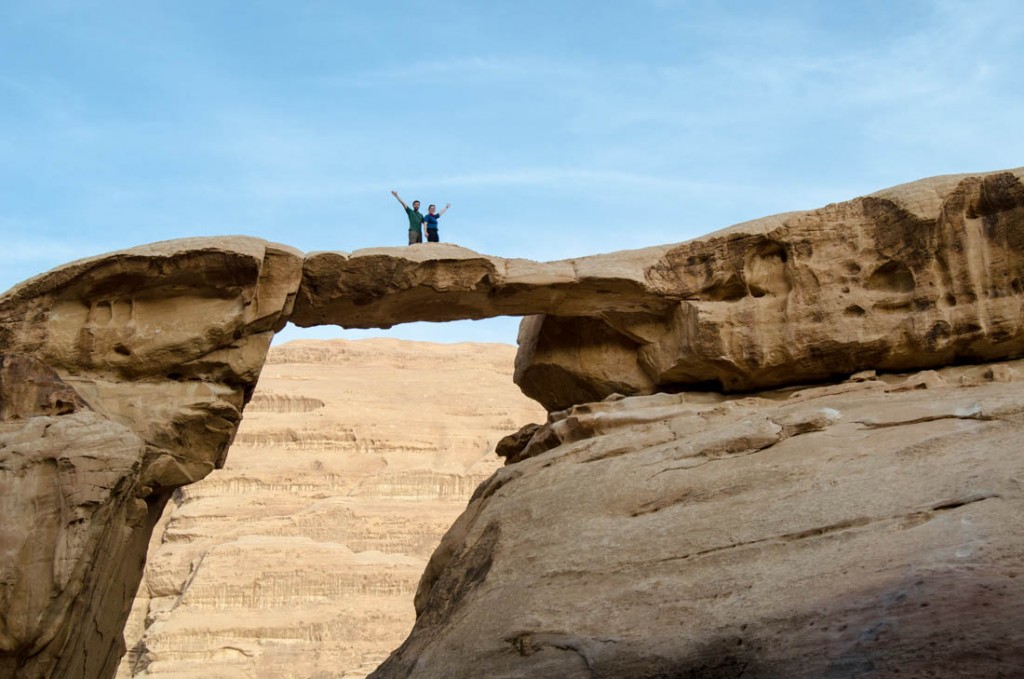 But before you readers start commending my boldness and regarding me as Lauren of Arabia, I’ll have to be honest and show you the before and after story of how I got up on top of this arch.

Pretty sad, I know. I’m quite terrified of heights and was convinced I’d slip on the rocks to my death. Thankfully, our helpful guide Mohammed captured not only our heroic pose on top of the arch, but also my “process” for getting up and down. [Readers, it’s ok to make fun of me here. I laughed so hard I started crying after seeing these pictures.] But before you go thinking too poorly of me, the trek up was much higher than it appears.

I often employed these rugged climbing techniques to get up the boulders.

Ok, now that I got that confession out of the way, let’s go on with the pictures that present my braver side 🙂 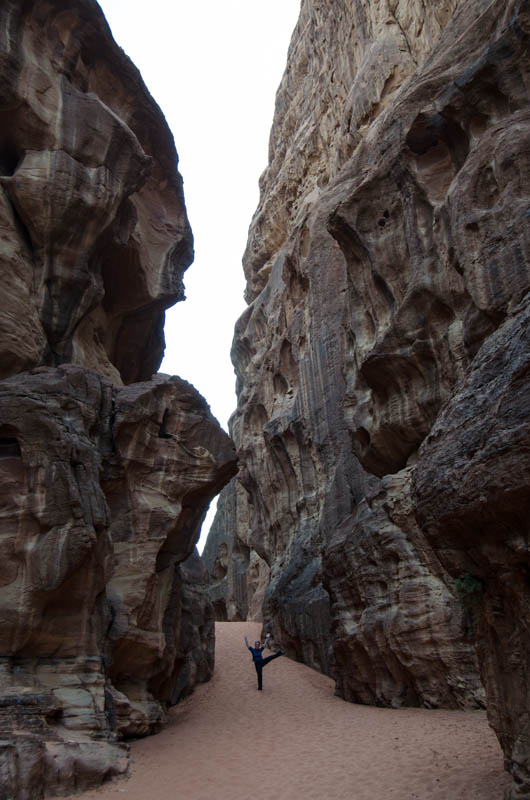 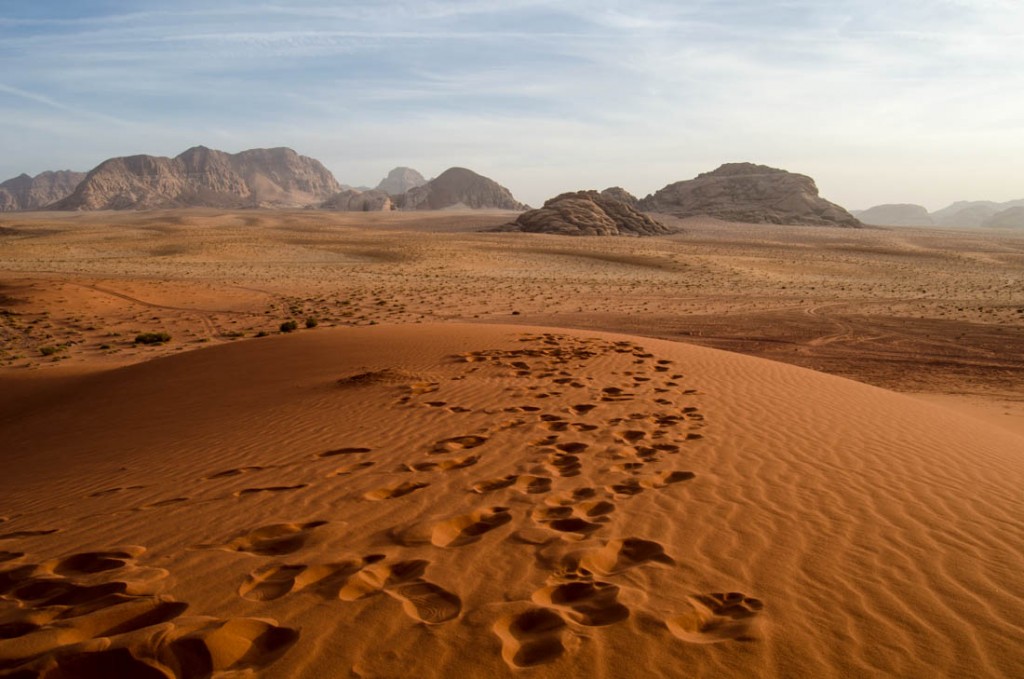 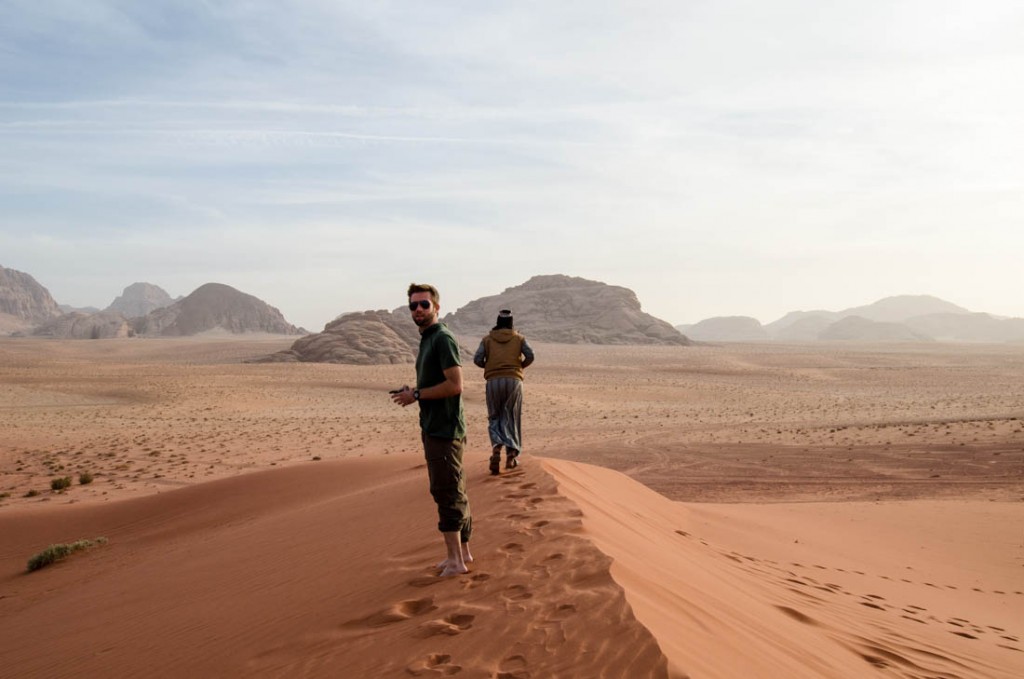 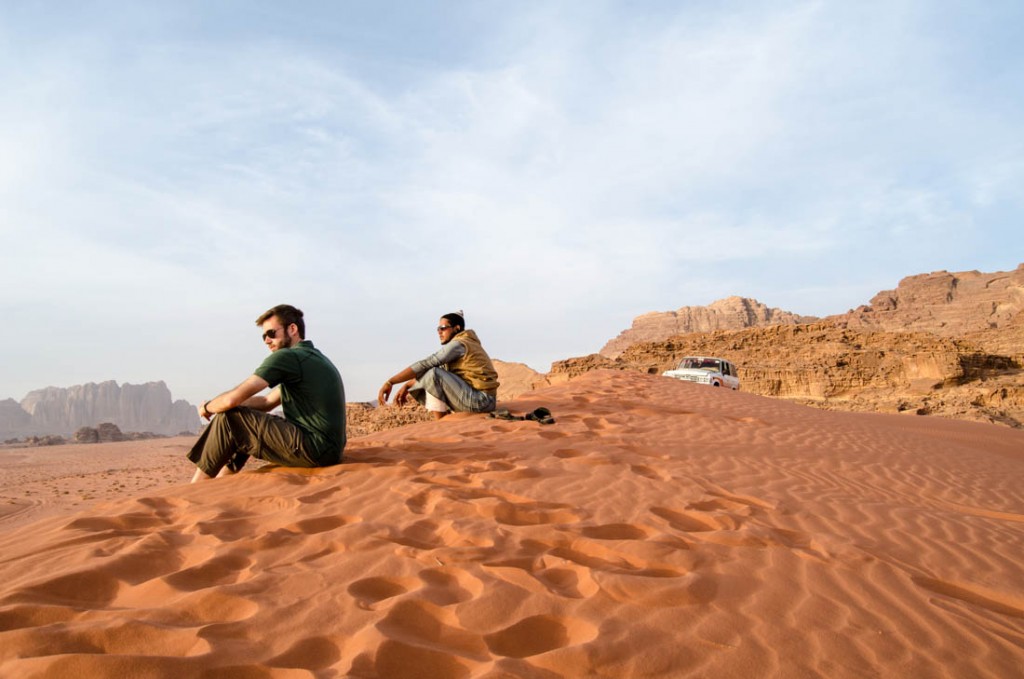 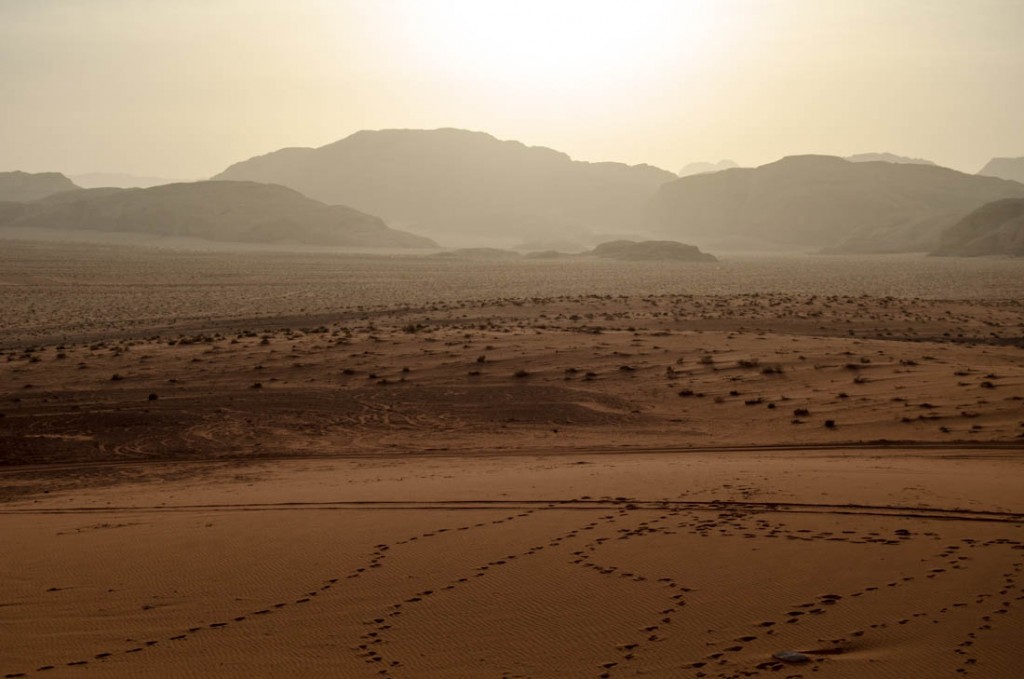 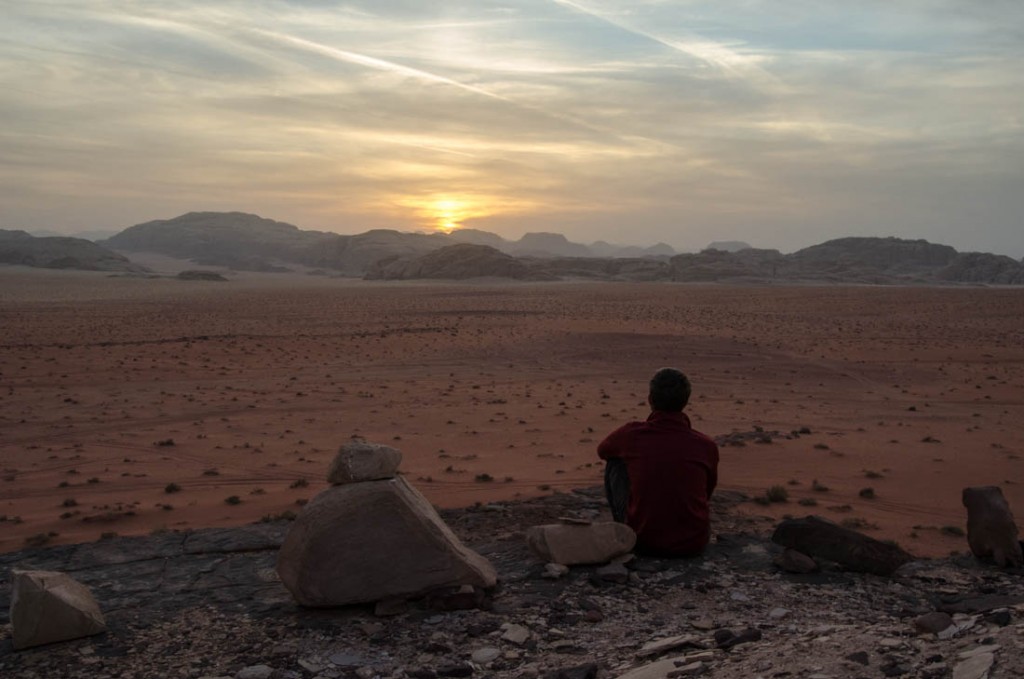 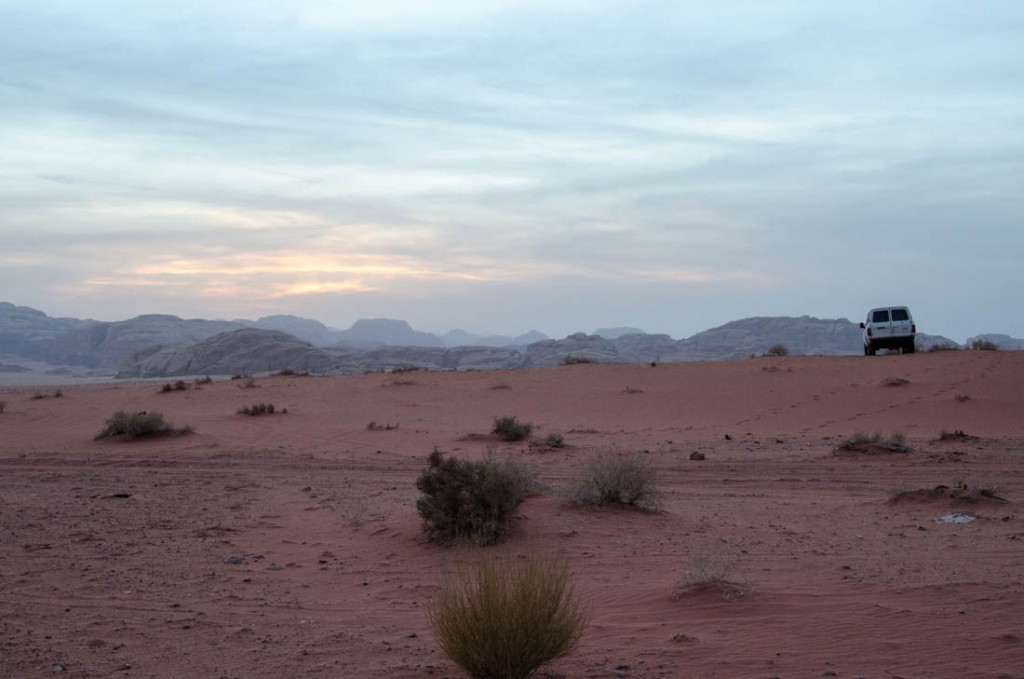 After a gorgeous sunset, it was time to head into camp. The group’s camp is nestled in the middle of a mountain away from any other people. Chris and I had our own tent, and there were even two Western-style toilets in the camp. There were only three other (American) tourists staying that night, and we quickly made friends with some awesome new people. The best part was a larger communal tent with a fire in the middle that held a big pot of the amazingly-delicious Bedouin tea. One of the guides picked up an oud and starting singing while we clapped along. Relaxing on the pillows, listening to the music, sandy and exhausted, and away from cell phones and the internet, Chris and I couldn’t have been happier. We went to sleep under a night sky blanketed in stars.

We’ve had some fantastic travel days (Iguazu Falls, Great Wall of China, and, most recently, Petra), but the mysterious beauty of the desert, the chance to play in the sand, and the incredible graciousness of the people we met combined to make this perhaps one of our greatest travel days yet.