From the moment we stepped off the train in Budapest, I felt like I was transplanted to New York City. Except instead of skyscrapers, there were low buildings with lavish facades from an incredible mix of architectural styles. But the same aloof rushing urbanites, the same thriving subculture, the same gilded upper-crust establishments juxtaposed with the same piles of trash on the curb and the same kebab stands on every corner. Both have that metropolitan glamour… covered with a fine layer of grit. Much like New York, it took me awhile to get my head around Budapest, and I still felt like the true Budapest was just out of my reach (I still feel this way about New York even though my Brooklynite sister has tried her best). 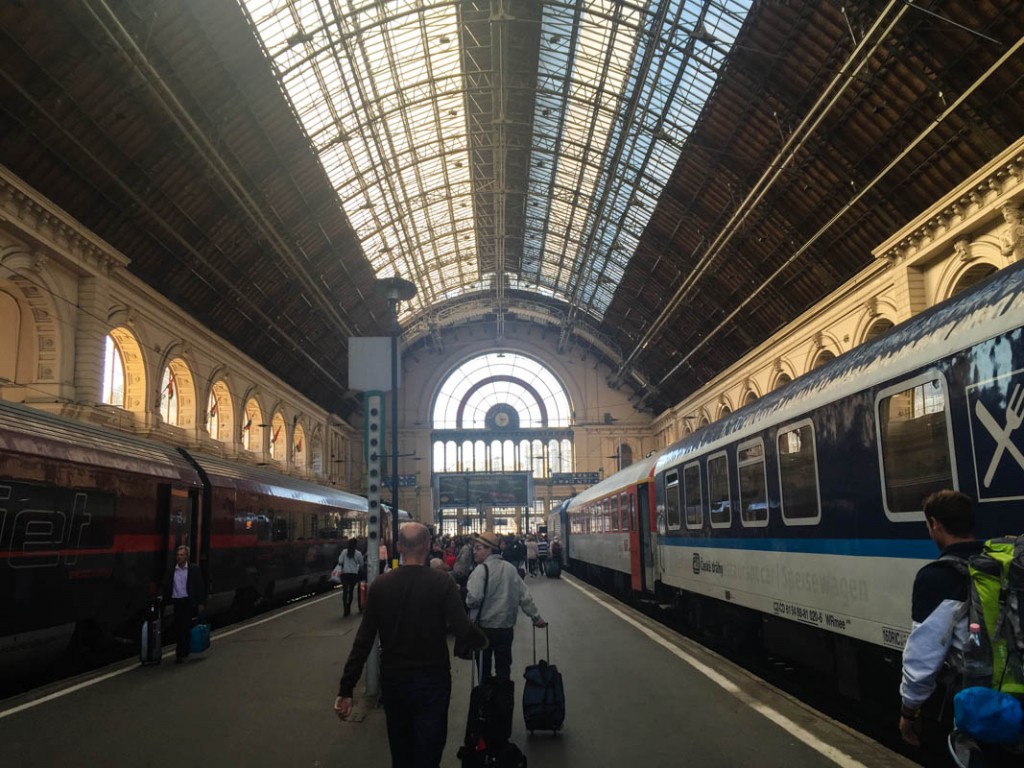 For instance, the elaborate frescoes and gilded chandeliers of the Lotz Room in the Alexandra Bookshop where we had cappuccinos and Hungarian Dobos Torte. Was I in the Plaza next to Central Park? Or, at the other end of the spectrum, the Erzsébetváros area with its trendy restaurants and “ruin pubs,” a Budapest-pioneered trend of setting up bars in derelict buildings. Was this Brooklyn? Admittedly, the main market in Central Market Hall was less grand than Grand Central Station, but still the same idea. 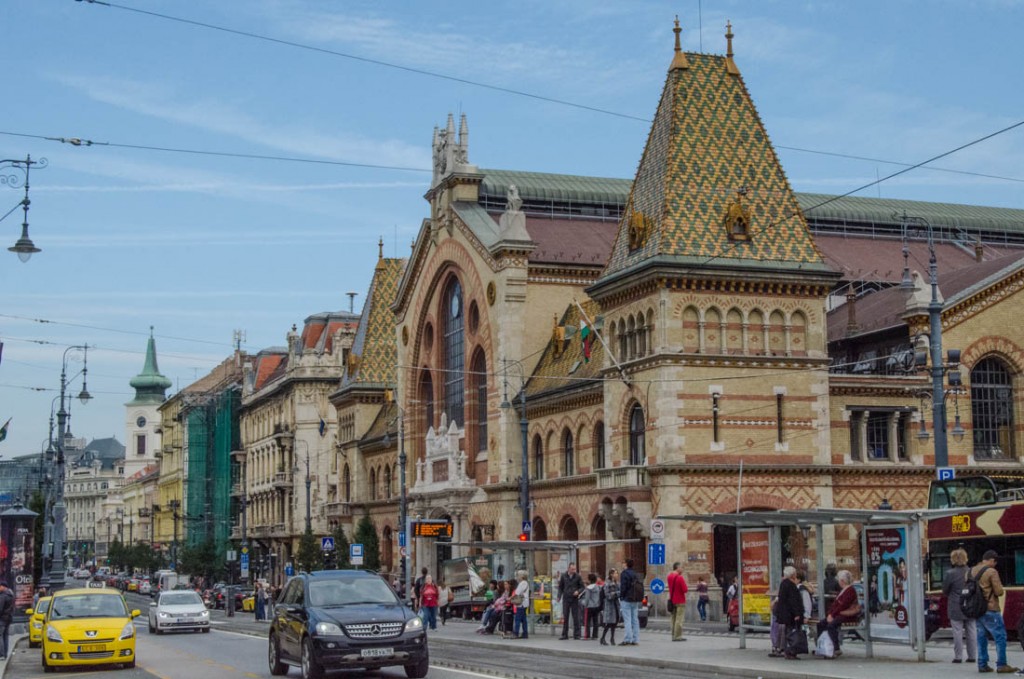 But, my impressions aside, the two cities don’t look anything alike, and Budapest (locals pronounce it more like “Budapesht”) has a story all its own. The capital of Hungary, Budapest became a single city occupying both banks of the Danube after the unification of Buda on the west bank and Pest on the east bank during the 19th century. It flourished during the 18th and 19th centuries and was the second capital for the Austro-Hungarian Empire. But much of the 20th century was ruinous for the city between the collapse of the Empire, the siege and resulting damage during World War II, the devastation of its Jewish population at the hands of the Nazis and the Hungarian Arrow Cross Party, the ensuing Soviet occupation, the brutally crushed Hungarian Revolution of 1956 until finally achieving independence in 1989. 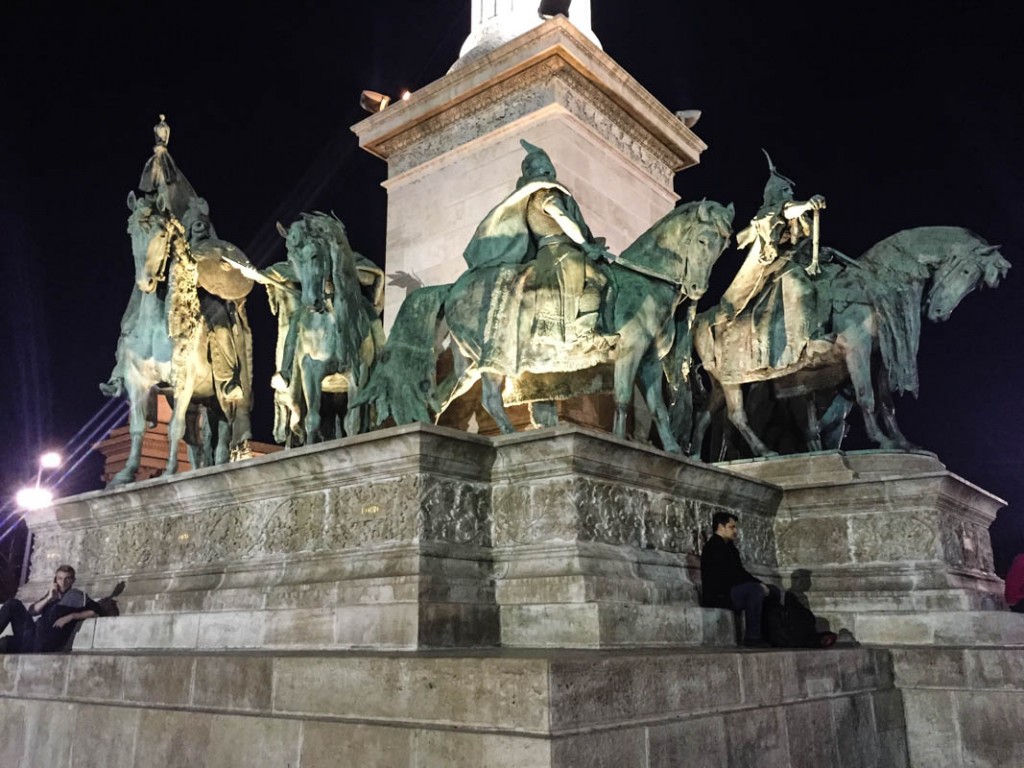 Another distinctive trait of Budapest is its abundance of public baths. Remnants of about 150 years under Turkish rule, public baths are still a part of life here. Locals and tourists alike flock to one of the city’s many spas to enjoy the thermal springs for relaxation and supposed health benefits. We visited the largest and one of the most famous: Széchenyi Baths. You might have seen photos before of its iconic Baroque gold domes or of old men in bathing caps playing chess in one of outdoor pools. With great recommendations from friends and Rick Steves alike, we had high expectations for the bath experience.

Sadly, it fell short. Two of the outdoor pools were closed (no chess-playing old men), and the rest of the outdoor bathers crowded into the remaining open one, bringing to my mind visions of people soup. Outside, the air was cool and water only lukewarm so we shivered. The sauna was standing room only, and we bypassed the dozens of indoor pools that were crowded with groups of high school kids (in separate packs of girls and guys, eyeing each other, of course). My guess is we simply had poor timing between the bath closures and the time of our visit (Friday night). I’m willing to give it another shot the next time we visit. It would be especially neat to be in the outdoor pools in the winter… assuming they crank up the heat next time. I mean, thermal spas, right?

Thankfully, the rest of the city surpassed our expectations. We visited the Buda side to see the beautiful Matthias Church, Fisherman’s Bastion, and Buda Castle. We walked across the famous Chain Bridge back to the Pest side of the city. Here, we saw the gargantuan Parliament building and the haunting Holocaust Memorial. The memorial is titled “The Shoes on the Danube Bank” and honors the Jews who were killed by the fascist Arrow Cross Party; they were ordered to take off their shoes at the edge of the water before they were shot, their bodies falling into the river. 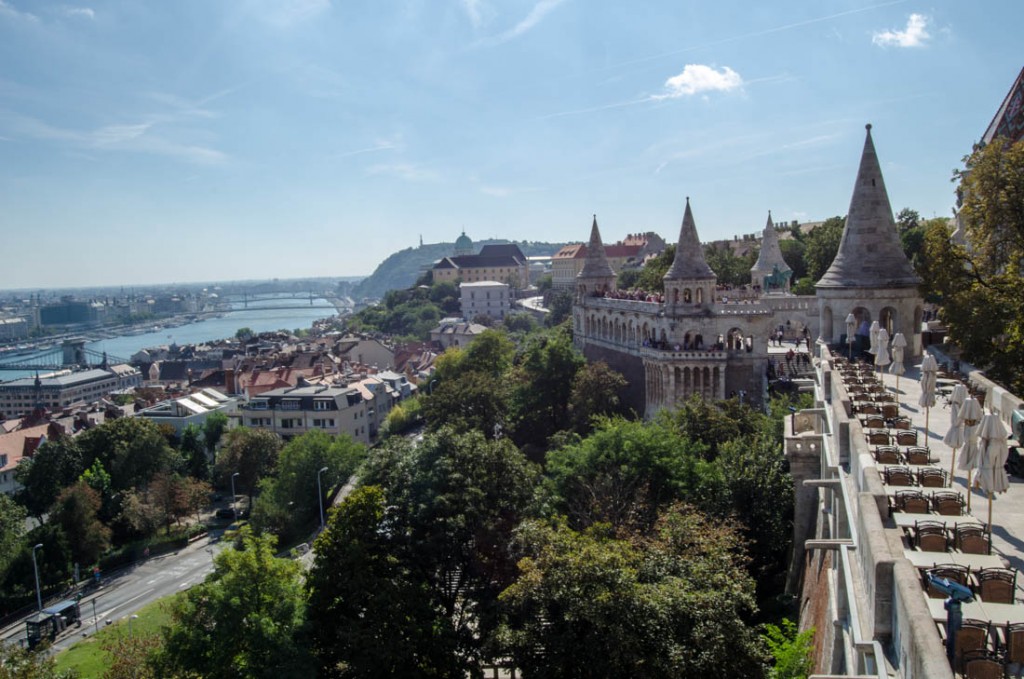 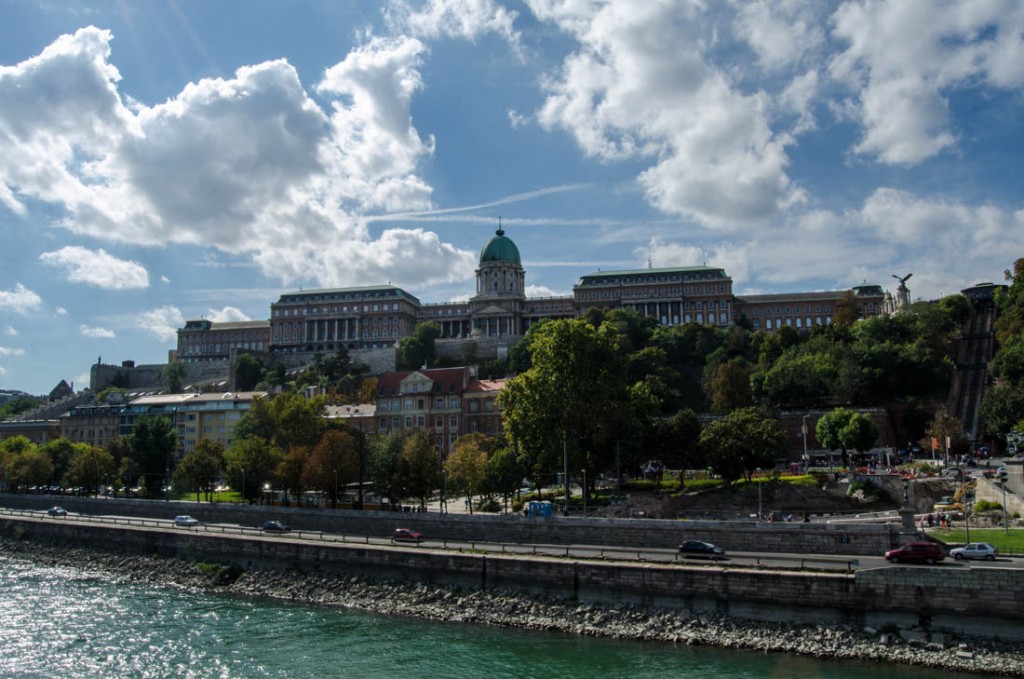 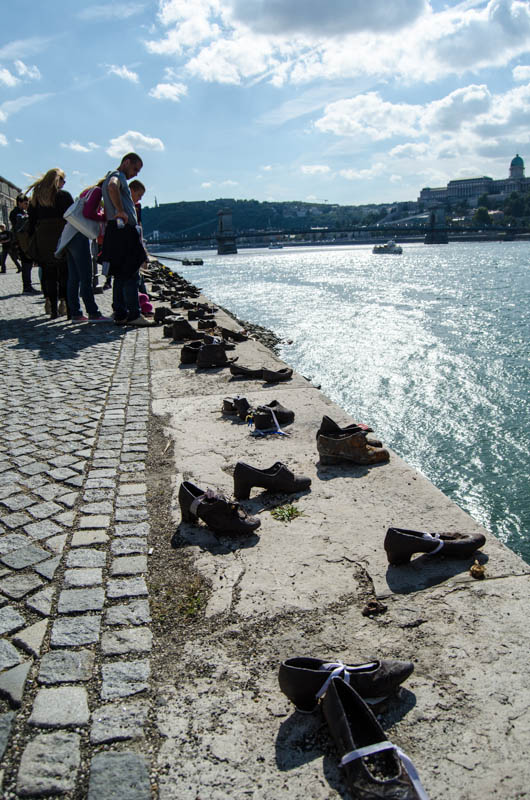 I had heard about Hungarian wines before coming to Budapest (in a previous Eastern European country, we saw a restaurant that boasted serving the best of it all… Czech beer, Polish vodka, and Hungarian wine!) and was eager to try them out. Also, happily, one of my great friends also joined us midway through our Budapest visit. Jen is an awesome travel buddy (I visited her on my sabbatical from work in 2012 and we traveled across Southeast Asia together), and, like us, she is a wine enthusiast. So we were all thrilled to discover a wine shop and bar called CultiVini that lets you try dozens of wines before you buy. You pay the equivalent of about $10 and get a chip-encoded card and a wine glass. Then, you just stick your card into the machines and choose which wines in which amounts you want to try. Some of them are more expensive and eat up your credit fast, others are cheaper and you can get the equivalent of several glasses of wine with your credit. We tried some really fantastic wines, including Hungary’s famous “Bull’s Blood” red blend and the dessert wine variety called Tokaji. 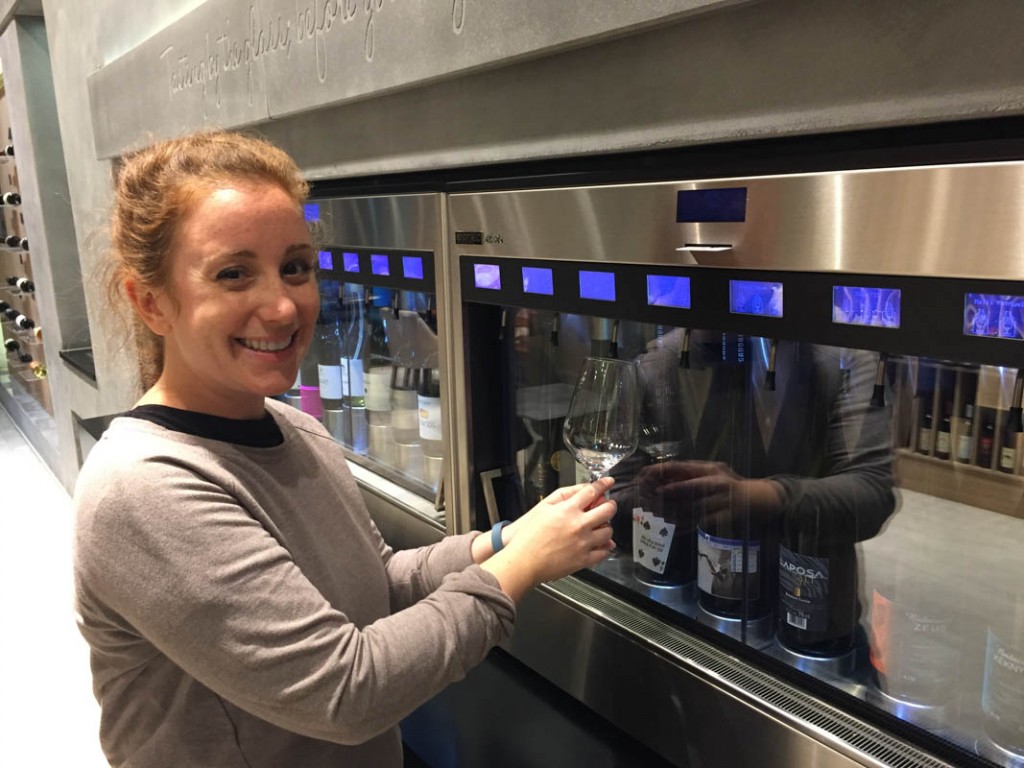 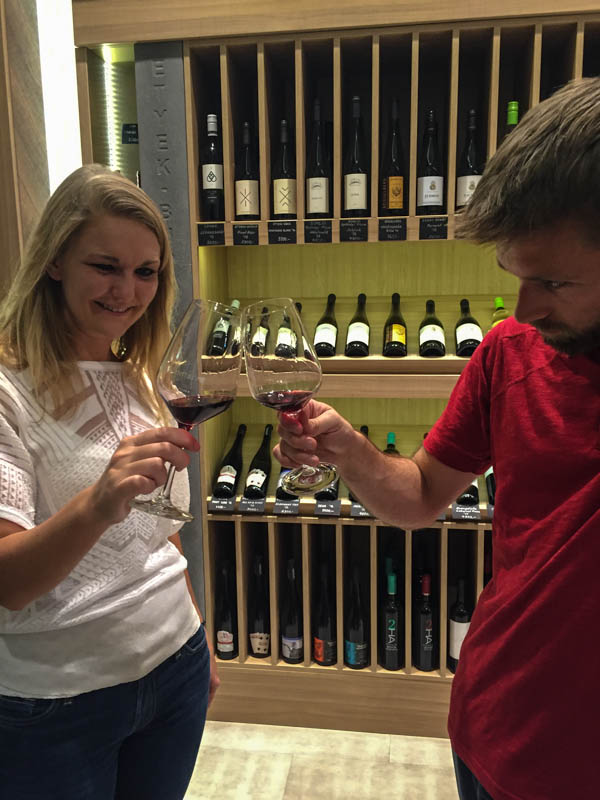 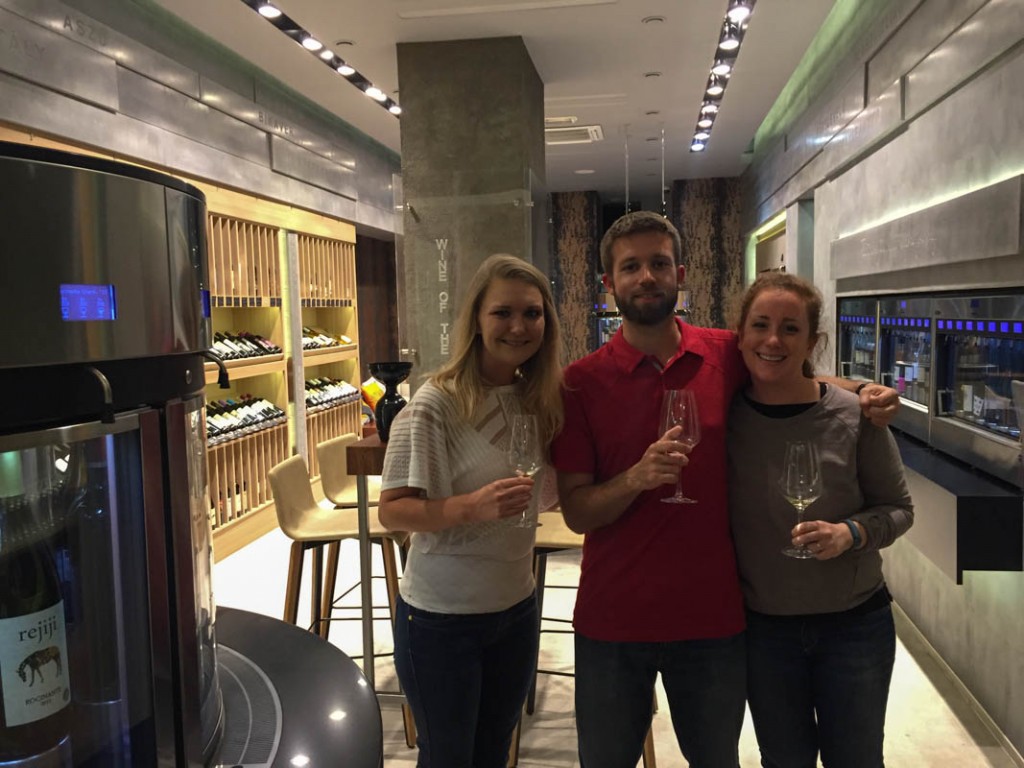 Our short time in Budapest was so much fun. From the grand buildings to the gritty streets to the delicious food and drinks. And I feel like we only scratched the surface of what Budapest has to offer. Hopefully we’ll be able to peel back even more layers of this onion on future visits.