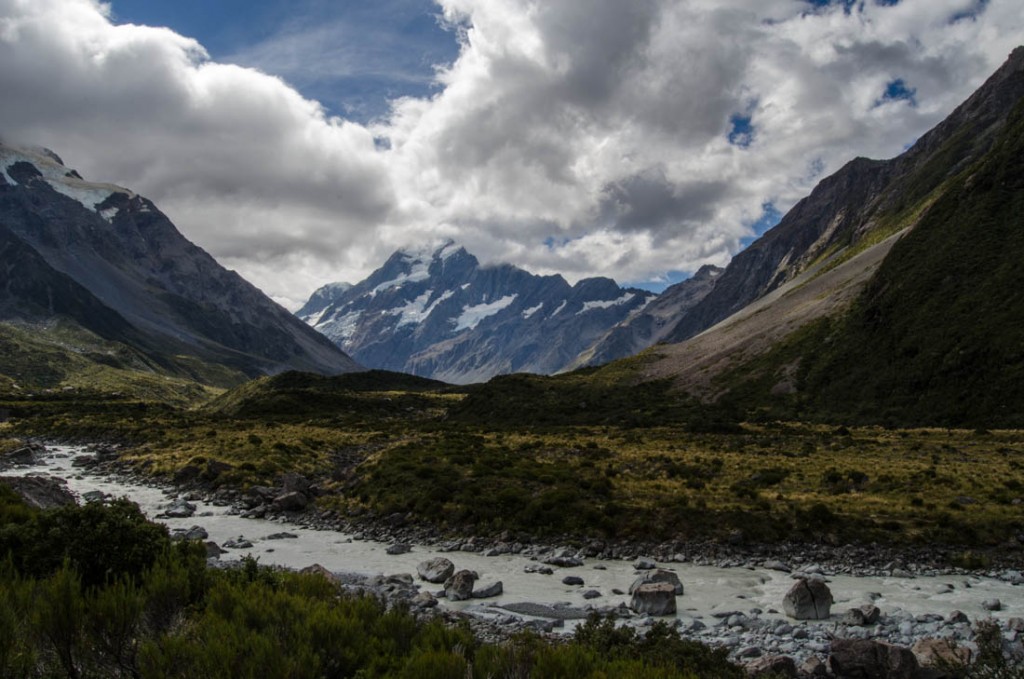 We’ve been extremely fortunate with weather on our RTW trip, but our luck ran out in New Zealand. The bad news was that it rained on each of the last five days of our South Island circuit. But the good news is that New Zealand still looks fantastic in the rain. The “Misty Mountains” track of our Lord of the Rings soundtrack was particularly fitting. 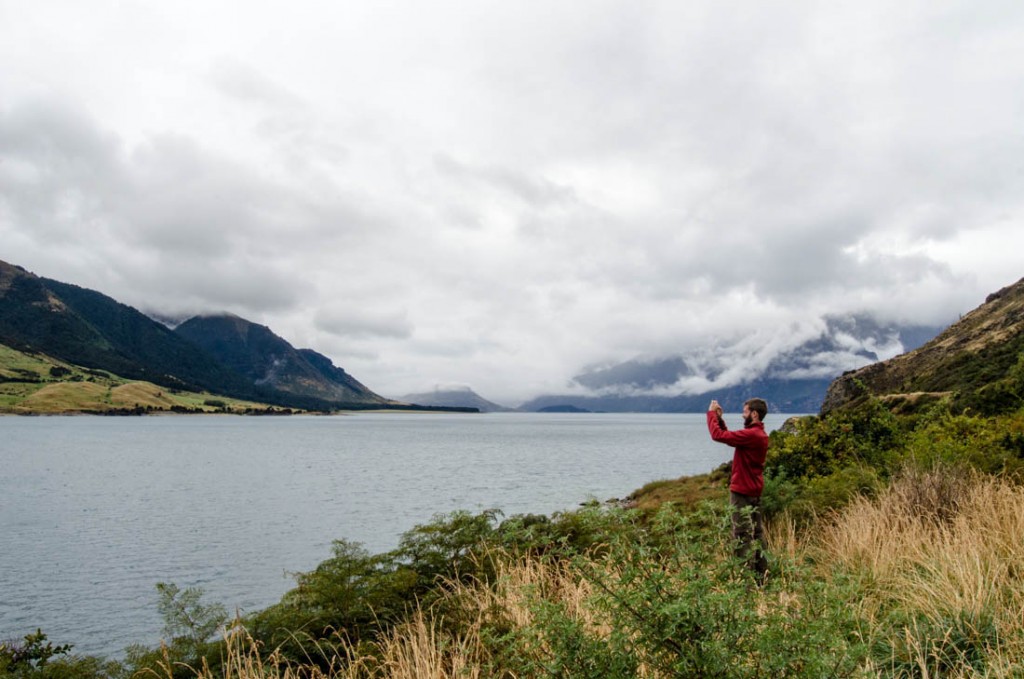 Thankfully, we managed to time our three-hour trek though Hooker Valley during the only stretch of sunshine on one day. But unfortunately, our diversion to Lake Tekapo to see some of the world’s best stargazing skies was for naught thanks to a thick layer of clouds at night. 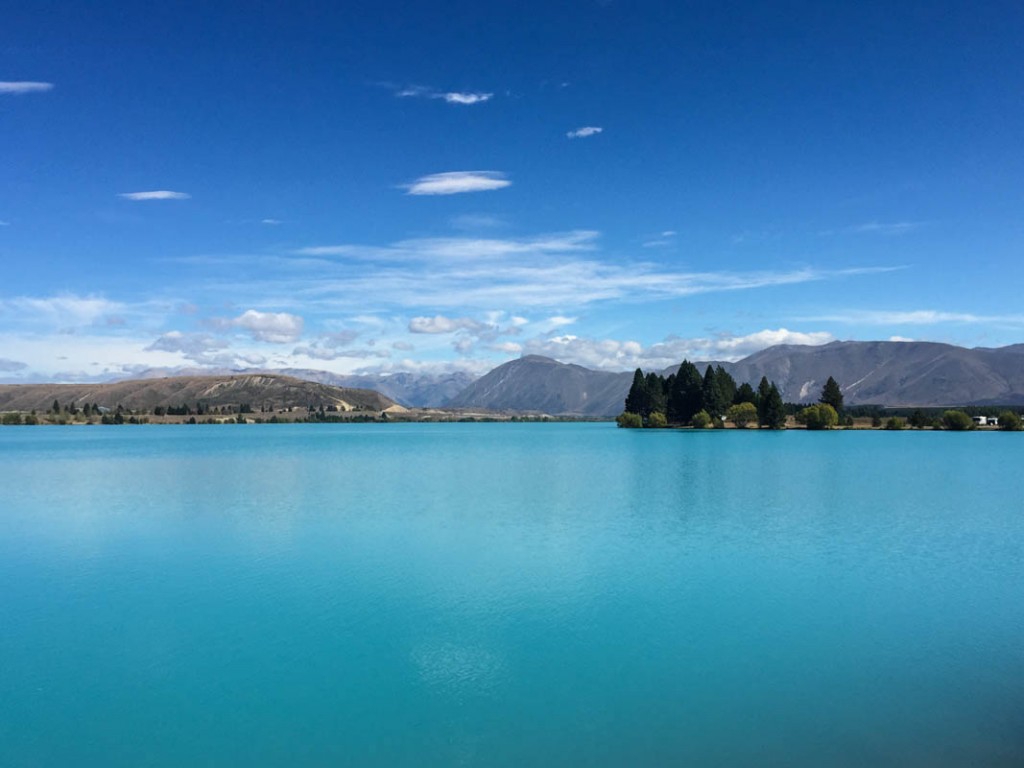 After our adventures in the central part of the country, we headed up the west coast to see some of New Zealand’s most rugged scenery. In some places, the wind from the Tasman Sea comes in so strongly that the trees along the coast look like they are bent over backwards. The rain, wind, and sandflies were particularly vexing here though, so we hurried north into what is known as “Glacier Country.” Franz Josef and Fox are two of the best-known glaciers in New Zealand, and I had a chance to visit both during my last visit. Due to a combination of time, money, and weather, we decided to just view the glaciers from a distance on this trip and save the hiking (or heli hiking, which involves taking a helicopter high up the glacier then doing the hike) for next time.

As we exited the wild west cost and Glacier Country, we made our way into the gorgeous northern part of New Zealand that is best known for long stretches of scenic sounds and rugged coastline. In Nelson, we had one of our best seafood dinners on the trip, which allowed us to try New Zealand’s famous Bluff oysters, reputed to be the best in the world. The winding road between Nelson and Picton along the breathtakingly beautiful Marlborough Sound is called the Queen Charlotte Drive. We stopped about a dozen times along the 40-km drive as the view kept getting better and better.

Marlborough in the northeastern corner of the South Island is internationally known for its wine, specifically Sauvignon Blanc. We spent a night in wine country and visited a handful of wineries while we were there. Most of the wineries offered free tastings of many excellent wines, although nothing came close to beating the value we found in Macedonia (or even South Africa thanks to the plummeting Rand).

The drive down along the east cost from Blenheim to Christchurch completed our circuit. But just when we thought all the adventure was behind us, we began passing colony after colony of seals right next to the road. We were able to pull over and come quite close to many seals right off the highway, but the absolute best part was when we found the Ohau stream, which is known as a refuge to little baby seals when their mothers go off to hunt. These babies make their way from the ocean up the stream and spend the day frolicking in the water and playing in the waterfall. Chris and I thought we had it made spending our days traveling the world… but let me tell you, these little guys have the life.

Last but not least was our day spent in Christchurch, the largest city in the South Island. In February 2011, Christchurch was devastated by an earthquake that killed 185 people and demolished most of its historic city center. In 2012, I visited just a year and a half after the quake and found most of the downtown still fenced off and in rubble. Sadly, much of the downtown is still that way nearly four years later when Chris and I returned. The city has come up with a few wonderful initiatives to rebuild—such as an outdoor market housed in shipping containers and a cathedral made from cardboard—but I was still surprised at how much was still in ruin today. Pretty much the entire city center is now under construction, and it will be fascinating to visit again in 10 years and see the change.

We spent our last night with Archimedes in true New Zealand style: eating next to our campervan with slow-cooked lamb and red wine. As we reflected on the trip, Chris and I both agreed that—even in the rain—New Zealand is magnificent.