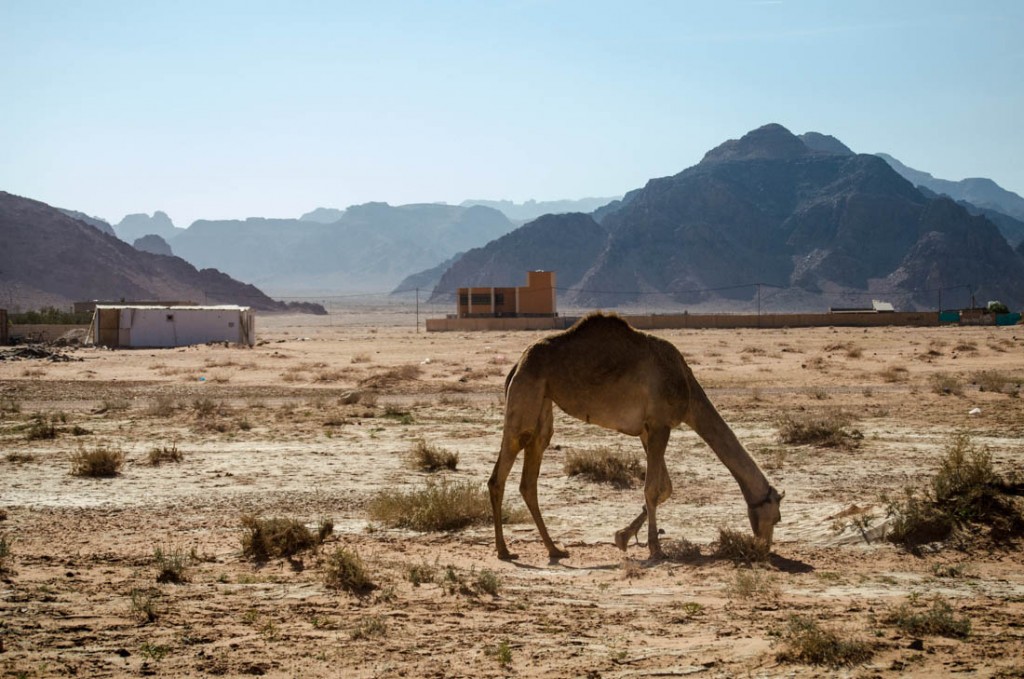 How much do we love Jordan? Let me count the ways. The joyful buoyancy of the Dead Sea. The ancient masterpiece of Petra. The unearthly beauty of Wadi Rum. The seaside destination of Aqaba. The cosmopolitan capital of Amman. It has stunning natural beauty, some of the best Roman ruins outside of Italy, medieval castles with scintillating history, and important religious sites, including the site that is believed to be where Jesus was baptized. Jordan’s cup definitely runneth over.

And the people. Oh, the people. I’m not sure I’ve ever met more friendly, welcoming people… and that’s saying a lot coming from a Midwest girl. Our first interactions with the locals were actually policemen at the checkpoints from the highway from Amman to the Jordan Valley. The checkpoints had the potential to be intimidating, but we were greeted with smiles and “Welcome to Jordan! Go ahead!” and “Enjoy your trip! Goodbye!” One policeman introduced himself and shook our hands and said he was very glad we were here. In Petra, refreshment and souvenir stands and donkey, camel, and horse transportation were run by the local Bedouins. These men and women (and children) were perhaps the closest thing to “touts” that Jordan has, but we never felt pressured or guilt tripped (a drastic contrast to our experience in Morocco). Instead, most people just asked if we’d like some tea, or, oddly, if we wouldn’t mind feeding our apple core to their donkey. They were also more than happy to point us in the right direction of the monument we were seeking, or provide helpful encouragement as we huffed and puffed our way up the steps to some of the loftier sights. And I already wrote about the incredible warmth and graciousness we experienced during our overnight stay with Bedouin guides in Wadi Rum. We were wondering whether this friendliness phenomenon was relegated to just the touristy parts of Jordan, but the friendly cries of “Welcome!” in the souk in Amman quickly put that to rest. The people here are just fantastic.

I truly believe the people of Jordan are just generally kind. But it also helped our cause that tourists are much rarer nowadays in Jordan than in years past. Tourism represents an important source of revenue for the country, but the number of visitors has been cut in half over the last five years in the wake of the Arab Spring and, more recently, turmoil in Syria and Iraq. [Jordan’s kindness extends far beyond tourists, of course. They have always gone above and beyond to host refugees from conflicts in neighboring areas, including an estimated 2 million Palestinian and 1.5 million Syrian refugees (a staggering number considering Jordan’s total population is only around 8 million).] People are avoiding the entire Middle East in general, including generally safe and stable countries like Jordan. Fun facts about Jordan: It was the second Arab country after Egypt to sign a peace treaty with Israel, and is one of the most progressive countries in the Middle East (women are not required to wear the hijab). Although Jordan’s royalty has not escaped Arab Spring-like protests, a constitutional monarchy seems to have provided stability, particularly in the 47-year reign of the preceding King Hussein, in a land comprised of rival tribes. 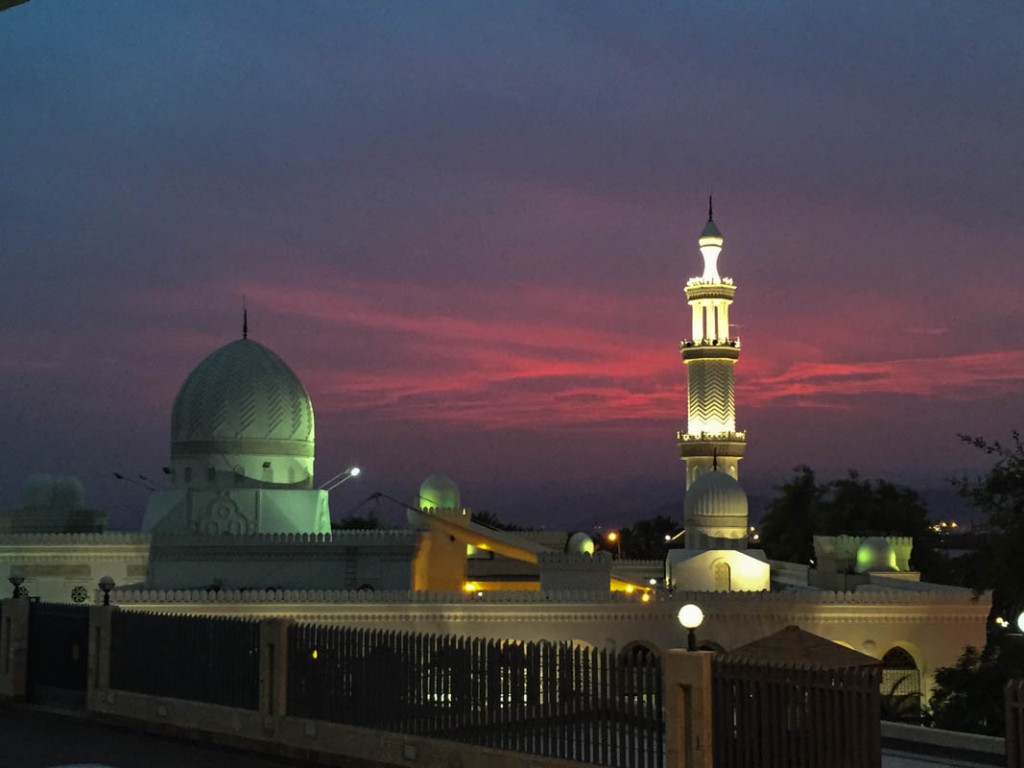 We were able to each get our 40 JD ($55) visa fee waived thanks to the government’s efforts to drum up tourism, and we were upgraded to a suite at the Jordan Valley Marriott (probably thanks to a mostly empty hotel). We were alone at dawn in Petra, and, even during the peak hours later in the day, the place was still pretty empty. We were doted on by the restaurant owner in Aqaba who sent out a mezze plate, dessert, and mint tea, all with compliments (although, admittedly, he was an Egyptian living in Jordan). In Amman, we were able to stroll the streets completely surrounded by locals and without backpack-toting tourists (outside of ourselves) to ruin the authenticity. 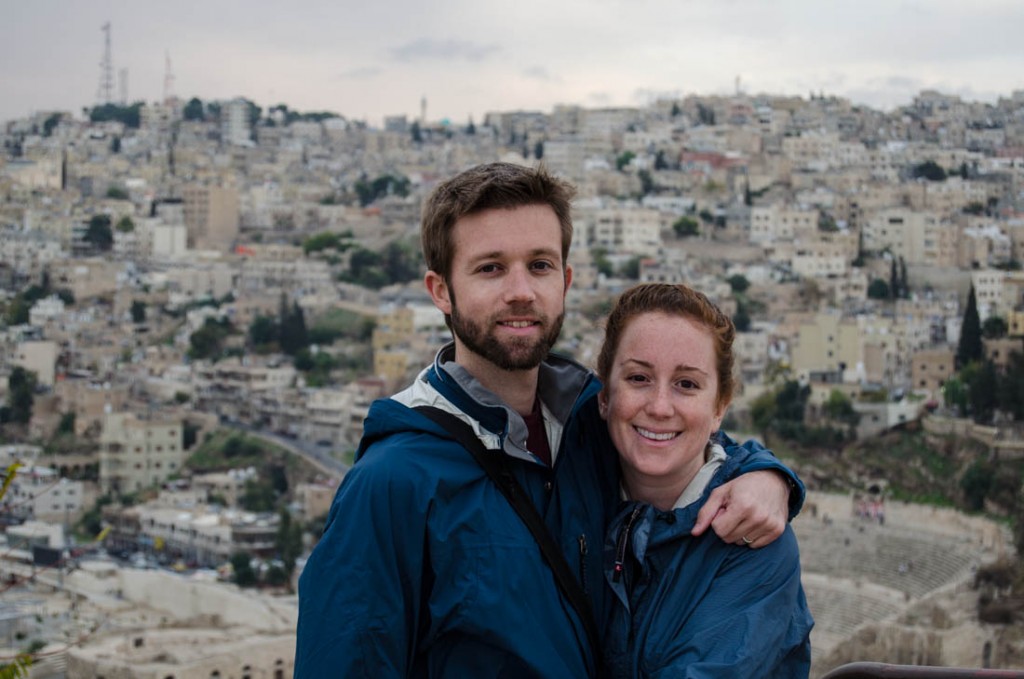 One of our biggest highlights in Jordan was meeting up with a fellow graduate of my undergraduate alma mater, Kalamazoo College. One of Chris’s former coworkers (another K grad) heard that we were going to Jordan and connected us via Facebook (thanks, Carolyn!) to her friend, Faisal, that she graduated with and who lives (and is originally from) Jordan. Even though we missed each other at school and were introduced via Facebook, Faisal offered to pick us up at our hotel and took us to one of the nicest restaurants in Jordan. He treated us to a complete Jordanian feast, complete with hot and cold mezze, grilled meats, and an array of desserts. We each got our own hubbly bubbly (a fun nickname for shisha) and spent the evening sharing memories of Kalamazoo and chatting about life growing up in America and the Middle East. Our dinner with Faisal only cemented the incredible opinion Chris and I have of the Jordanian people (and their amazing cuisine).

Our week in Jordan was one of the most memorable of our trip yet. In Wadi Rum, Chris declared that Jordan had officially edged out Romania as his favorite country we’ve visited to date. For me, it earned its spot in the three-way tie with Indonesia and Macedonia (following closely by Georgia, Romania, and Japan). One thing can be said without debate: Jordan is a fantastic and incredibly underrated place to visit. We already have a long list of to-dos when we return.