After leaving the cruise ship-chaos of Dubrovnik, I was pleasantly surprised by its neighbor to the north, Split. Split has a lot of things going for it: a waterfront promenade, beaches along the Adriatic shoreline, a green market, trendy restaurants and wine bars, and fantastic Roman ruins. Even though Split has its fair share of tourists, I got the feeling that locals actually lived in the city and frequented many of its restaurants and bars.

Split was chosen as the location for the retirement palace of Roman Emperor Diocletian. Diocletian ruled from 284 to 305 AD and chose the location—nearby his hometown—for its prime sea access. Diocletian built an absolutely massive structure that spanned nearly 10 acres. Sometime after Diocletian’s death the Romans abandoned the site, and it was left empty for several centuries [the fact that huge places like this and Indonesia’s Borobudur can remain empty for hundreds of years still amazes me]. In the 7th century, local residents fled into the palace for protection against invading Slavs and began making their homes and businesses within the walls themselves. Today, you can still see traces of the structure of the palace in the main city center. Modern-day Split quite literally rose up within the ruins of the palace, and you catch glimpses of Corinthian columns, archways, and colonnades as you stroll along the narrow streets. 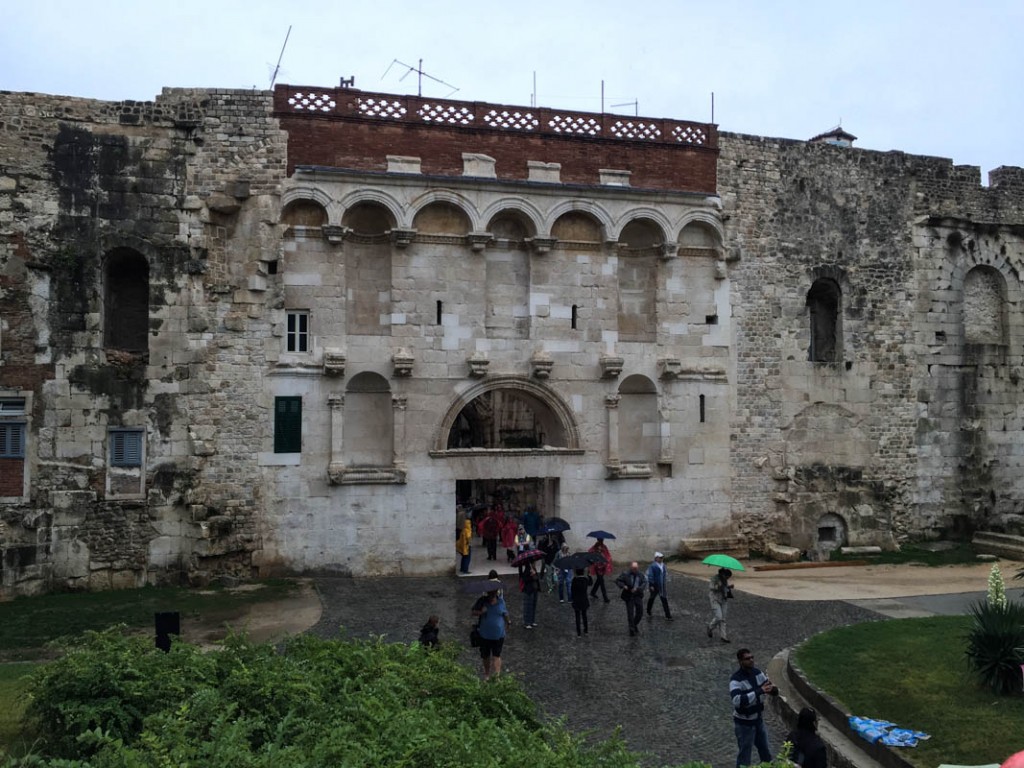 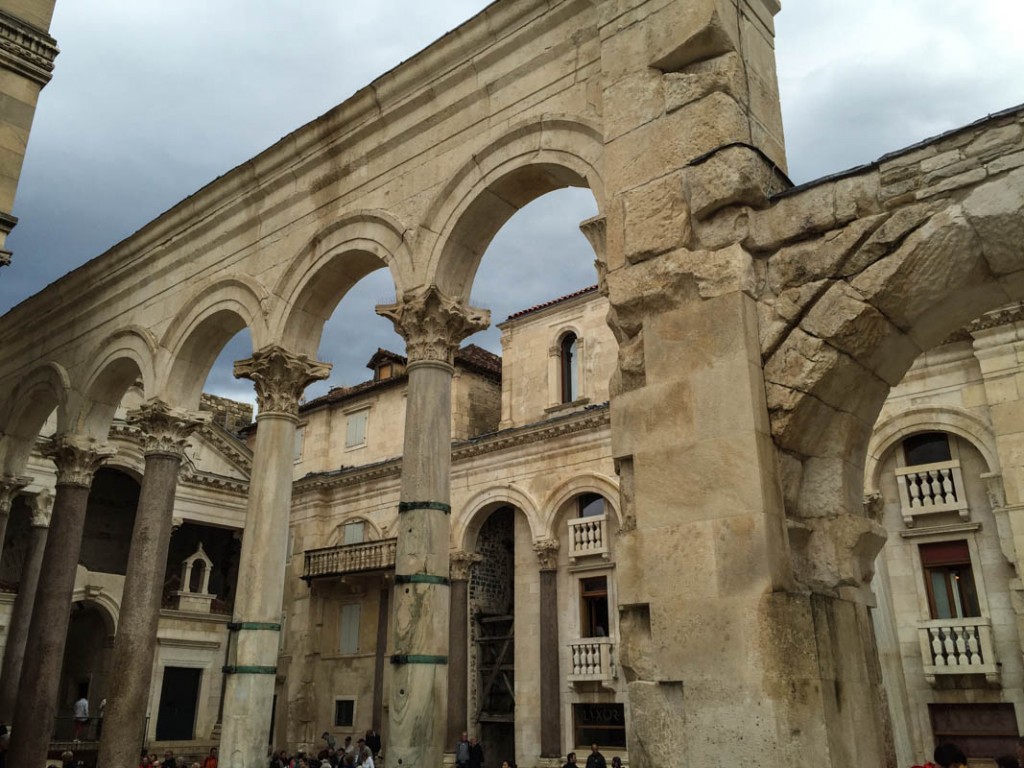 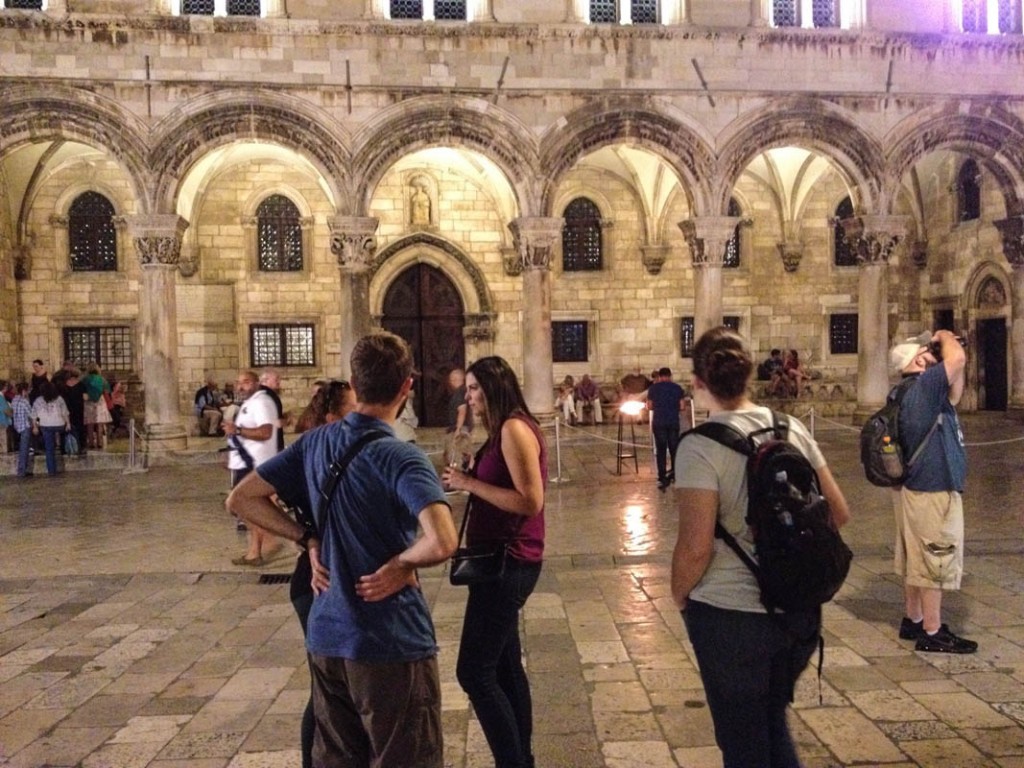 One of the best-preserved parts of the palace is the peristyle. In Diocletian’s time, it served as a monumental court for receiving visitors. Today, it’s inhabited by Lvxor Café, a restaurant-bar that lets its guests sit on cushions along the steps and enjoy frequent live music. One of Diocletian’s many granite sphinxes imported from Egypt overlooks the revelry. Another sphinx that lost its head overlooks the Temple of Jupiter nearby. 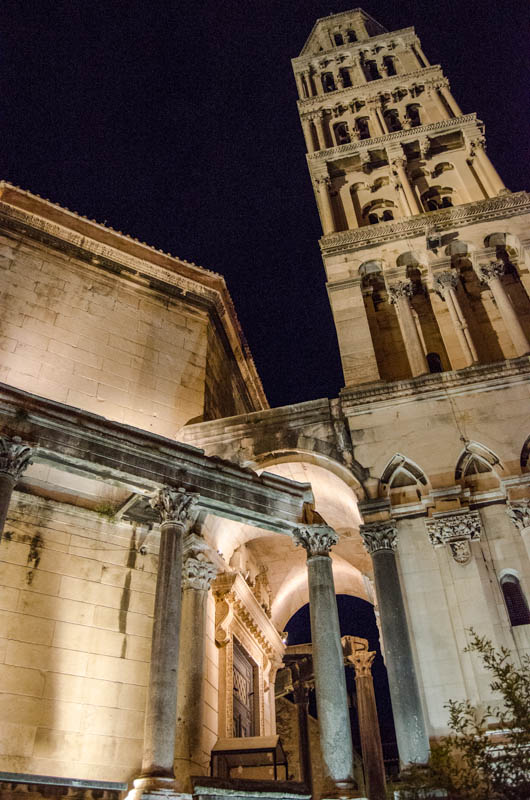 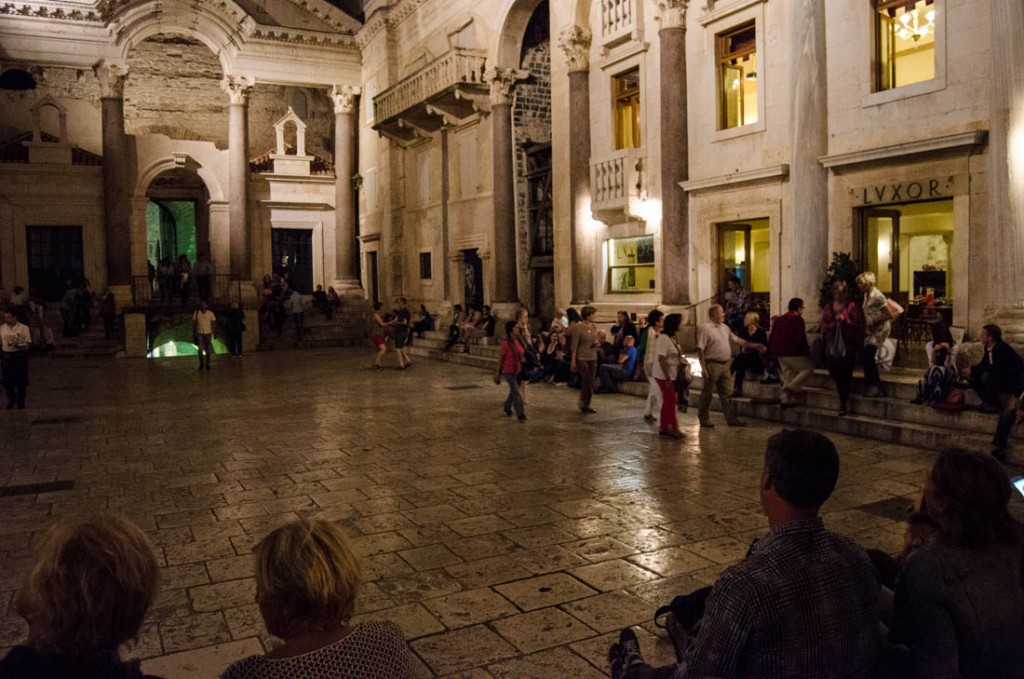 The best views of the remains of Diocletian’s palace come from climbing to the top of the bell tower built on the site of the emperor’s mausoleum. The Diocletian’s mausoleum was converted into a Catholic cathedral in the 7th century; it’s the second oldest structure used by any Christian Cathedral (after the Pantheon). Visitors to the cathedral nowadays see lavish Catholic imagery held within ancient Roman housing.

Roman ruins aside, modern-day Split has plenty to offer on its own. After hearing Anthony Bourdain explicitly rave about how exceptional and under appreciated Croatian food is, I had high expectations for the cuisine here, especially after some absolutely fantastic experiences in other former-Yugoslav countries. However, even though we had some great seafood in Dubrovnik, it wasn’t until Split that I finally got a glimpse into Bourdain’s amazement and surprise. Wandering around for dinner, we ended up scoring a table at one of Split’s best restaurants where I had hand-made pasta with truffles (Croatia is the top destination for truffle hunting in the world) and prosciutto. Yep, Anthony, I finally get it. A visit to one of the city’s best wine bars where they specialize in teaching you about the grape varieties and growing regions further cemented my awesome Croatian culinary experience in Split. Gelato from a local favorite named after the Split soccer team Hajduk was ice (cream) on the cake.

Although it rained for most of our time in Split (crazily enough, this is the first time in our nearly four months on the road where rain has interrupted our travel plans! We’ve been incredibly lucky with weather so far), we were able to check out the nearby Bačvice Beach where locals lay on one of the few sandy beaches of the Adriatic and play picigin (a Croatian ball game played in the shallow water).

Split was definitely my favorite of the two Croatian cities we visited. Not only did it feel more authentic, but the fact that it sprouted from an ancient Roman palace that you can still see remnants of today is incredibly special. But next time we visit Croatia, I think a cruise up the coast to find some of those famous truffles ourselves will definitely be in order.